Art and the Orient

Fikrun wa Fann was a cultural magazine published by the Goethe Institute from 1963 to 2016 that supported and shaped the cultural exchange between Germany and Islamic countries. Together with the publishing of the last issue, “Flight and Displacement” (issue 105), in autumn of 2016 the maintenance and updating of this online portal was ceased.

“Art is a universal language” 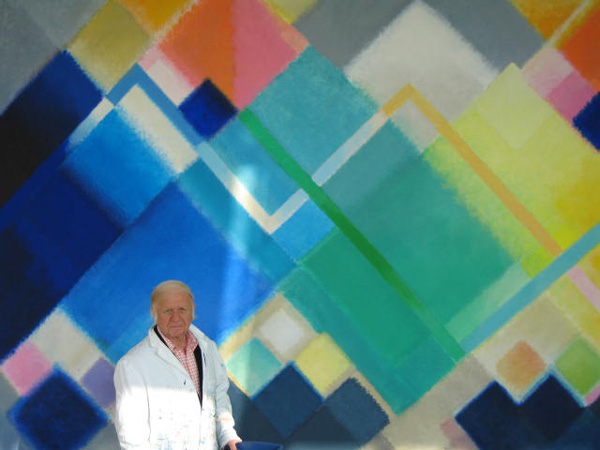 The works of the painter and sculptor Heinz Mack bear tribute to his very individual approach to the links between the “Orient and the Occident”. The audience likes them, both in Berlin and in Tehran.

“Wer sich selbst und andere kennt, / wird auch hier erkennen: / Orient und Okzident / sind nicht mehr zu trennen.“ (i.e. Those who know themselves and others will recognise here, too, that the Orient and the Occident can no longer be separated”. That was written by Johann Wolfgang Goethe in 1819 in his collection of poems “West-East Divan”. zenith talked to Heinz Mack, who has created new illustrations for Goethe’s poetry and received an invitation to visit Tehran as a result, who has erected stelae in the desert and whose most recent exhibition, at the Pergamon Museum in Berlin, was entitled “Transit between Occident and Orient”.

zenith: Herr Mack, how would you describe light in the desert?

Heinz Mack: Physically, light in the desert is extraordinarily clear, transparent and intensive. But there is also a moral aspect. It is incredibly beautiful, but merciless and critical at the same time, a light in which nothing can be hidden. Anyone wanting to hold his own in this light has to have a strong character.

For your famous “Sahara Project” of 1958, you erected stelae made of light-reflecting materials in the North African desert. Where did that idea come from?

One first inspiration was the sculpture “Endless Column” by the famous Romanian sculptor Constantin Brancusi, whose atelier I was allowed to see after his death in 1957. For another thing I started to rebel against the institution of museums and art galleries very early on. Museums seemed to me to be cultural cemeteries where art had no chance to breathe freely. So I asked myself how my sculpture would hold its own if it was put into a public space totally devoid of cultural associations. That was the space of the desert.

In that respect, the desert is an extreme.

Yes, it is very difficult to reach the heart of the desert where there is no blade of grass growing, no bird flying, where there is nothing but sand and light. But that was the intention, I wanted to find a place where human civilisation had not yet left any trace. I made films, photographs and books to convey my art. My film “Tele-Mack” was even very successful and also won awards. I call that “tourism of the imagination”, which takes place purely optically.

In the desert, my works of art were suddenly tiny.

How did you stage your works of art in this natural setting?

In the desert, my works of art were suddenly tiny. In order to control the dimensions, you have to set the stage, that is to say, use film and photography to heighten the effect. For example, we set up 50 small mirrors in a strict classification system to form a plantation in the sand. The sand was reflected in the mirrors, and the mirrors cast bright light shadows and dark shady shadows, turning the whole into strange, artificial vegetation. The real subject is light, of course – the subject of my entire artistic existence – and light has a special effect in the space of the desert.

From your curriculum vitae, I see that you have spent time working in Morocco and Algeria, in the African Ténéré desert, Egypt, Oman and Iran. What led to your interest in this region?

An inner compass told me very early on not only to look west but also to look east. That was a kind of protest against the cultural hegemony of the Americans. That might be all right for the international art market, but the world has globalised a little, thank God. The cultural areas in the east simply fascinated me.

And what do you mean by the “elective affinities” between your art and Islamic art?

Oriental art as a whole has one feature in common: it has no object. That is to say that human beings who were made by God are so good and so beautiful that it would be an offence for human beings to become creative and to depict human and animal forms. My art has been equally devoid of objects for 50 years because there is nothing representative or imitative in it. That is to be seen in the Sahara Project where the sculptures practically dissolve through reflection in light – these appearances of light cannot be grasped materially. I also use oriental motifs, such as ornament. My art remains completely autonomous here, and is based on my own paradigms and experiences, but it naturally finds interesting neighbours in oriental art.

The former Iranian President Mohammed Chatami invited you to hold an exhibition at the Tehran Museum of Contemporary Art in 2001 because he liked your illustrations of Goethe’s “West-East Divan“ (1998) so much.

Yes, the first Western artist since the coup against the Shah in 1979.

Die Zeit described the exhibition as a “highlight of German foreign cultural policy”. You automatically took on the role of a “cultural diplomat”.

Of course, that invitation also had a political dimension. The exhibition opened doors that had previously been closed – and they were completely closed! I think that we would do well to get to know this spiritual and highly poetical world culturally too, not just politically. That is an intellectual challenge, of course.

The exhibition had to be extended three times.

Your art was very well received in Tehran. Is that because of the “Islamic spirit” that was seen in your works?

The exhibition was incredibly successful – it had to be extended three times. But I must underline that ultimately, I was showing European art in Tehran. Nevertheless, the visitors there had no problems at all with my exhibition. I think the Iranians were fascinated because it was an artistic language that met them half-way.

Your latest exhibition “Transit between Occident and Orient” at the Berlin Museum of Islamic Art has been your most successful to date, with 120,000 visitors. Does art provide a way of overcoming cultural barriers?

Art is a universal language. It used to relate only to the West – now it is opening up towards the East. This dialogue has to be supplemented, of course. I regard the present cultivation of fears towards Islam as disturbing. Of course, terrorism is one of the most dreadful things one can imagine - we have had terrorists in our own country ourselves. But just because this terrorism acts in the name of Islam, it does not mean that the whole of Islam is to be damned. The terrorists are an absolute minority.

Does your art help you to accept a different culture?

Art is not there to take on roles. Art has to exist in its own right. But if it takes on a humanistic attitude indirectly, not only tolerating but understanding and accepting the other, an interesting and fruitful relationship can result. If I take an interest in others, there is also a dialectic chance that others will take an interest in me. That is why I think it is all right for people to call me a “cultural ambassador” in this connection. Perhaps I have been able to communicate something that might not otherwise have been communicated. And that’s an ambassador’s job, isn’t it?

Heinz Mack
Heinz Mack, a painter, sculptor, object artist, illustrator, stage designer and photographer, was born in Lollar, Hessen in 1931. After studying at the Kunstakadamie in Düsseldorf and reading Philosophy in Cologne, he initiated the avant-garde artistic movement ZERO with Otto Piene. His trips have taken him not only to the Near and Middle East but he also lived in New York for three years and has travelled to Japan and the Arctic. The artist’s works are to be found in more than 100 museums in Germany and abroad and have been shown in more than 170 individual exhibitions around the world. Heinz Mack, who celebrated his 76th birthday on 8 March, now lives in Mönchengladbach and in Ibiza.

Institutions or people in Islamic countries who are employed in the journalism or culture sectors have the option to obtain a free subscription.
To the application form ...

Qantara.de – Dialogue with the Islamic World

Covering the Muslim world with a critical, resourceful, and balanced view