From September 2008 to February 2009, I experienced six exciting months in the rough city of Glasgow. It was really great! Despite all the pessimistic prophecies it rained very little throughout that time. On the contrary sun and sea awaited me on weekend trips to picturesque Ayr. Back in the big city there were plenty of museums, pubs and charity shops to keep me occupied. Glasgow is undeniably trendy: vintage, outlandish or chic – anything goes.

There was just one thing that I really missed – my dearly beloved bicycle. Sometimes it took forever to get from Dennistoun to the West End. Of course there was an abundance of buses, cars and taxis, but not a bicycle to be seen. Okay, okay, maybe I spotted a handful of bikers while I was there. Maybe. But how was this possible?

At the very beginning of my stay, my landlady had warned me that riding bicycles in Glasgow was a dangerous enterprise and buying one was unaffordable anyway. Well, for the limited time I was going to be here, I would confine myself to buses and ‘shanks’s pony’. Yet there was my roommate’s bicycle... I couldn’t quite understand why it was allowed to idle away all day in the apartment. Hence the following plea on behalf of the bicycle.

Germany without bicycles? No way! 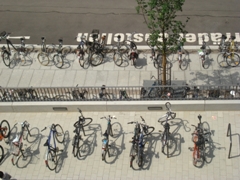 Onto the saddle and off we go!

More than ever the Germans en masse have taken to this metal beast of burden, thanks to its unlimited multifunctionality. Every German – literally everyone – owns at least one of these amazing creatures and enjoys the advantages day in, day out. In town or country, cyclists sail along on the breeze at their own tempo. The whole body moves forward unstoppably with incredible lightness. What a feeling of being alive – whoohoo!

Apart from the satisfaction gained from physical exercise, you notice with no less satisfaction that cycling also offers a means of resisting the constraints of our time. No more hanging around in traffic jams or waiting for public transport. Cycling freely and independently through the world is so much more relaxing!

It’s all so simple

The bicycle is also transformed into a beast of burden when Germans are looking for a way to transport people or things. Baby seats, baskets, bags, trailers... when it comes to an outing or a shopping trip, a cyclist’s needs will always be met. Protected from the wind, tiny tots peep gleefully from their carts, or peer with curiosity from behind their parents’ backs. And, of course, a four-legged passenger can make a unique figurehead.

Then again, sometimes one of these flamboyantly dressed racing cyclists finds himself caught up in the treacley traffic of a city centre. Passers-by marvel at how nimbly cyclists can bypass the traffic jams. Sooner or later everyone, even the most unathletic townie, feels the urge to spend some time in the country – and the easiest way is to cycle there. Today’s two-wheelers offer so many conveniences: comfy saddles, innumerable gears, powerful brakes... and fresh wind in your hair for free. There’s a model for every type of cyclist!

Pedal, pedal – slower and slower... Only brave pioneers manage to cycle in Scotland. To my mind it’s much harder to lead a two-wheeled life in Glasgow than it is in Leipzig. A few hardened individualists stand their ground – on which there is not a single cycle lane. Drivers of cars and buses berate these few courageous athletes with the help of horns, accelerators and a variety of verbal insults. In this respect, cycling in Glasgow is really for people with a death-wish. Threatened, harassed, insulted – cyclists constantly have to find ways of avoiding the four-wheeled menace. And yet you can still spot some hardy individuals in high-visibility jackets snaking their way through streets clogged with noise and fumes.

Where are you? Is there anybody out there?

Locating a bicycle shop in Glasgow turned out to be an almost impossible undertaking. And once found, I was left with a stark choice: dig deep into your pocket or forget about it. Maybe if I had inherited a nice sum at that point, I could have afforded some fresh wind in my face. But even a second-hand market for bicycles was nowhere to be found. Most of the city was bikeshop-free with a few costly exceptions. It really is a pity that the Glasgow trendsetters have not managed yet to sell such an individualistic thing as a bicycle to their fellow Scotsmen. A bicycle not only makes everyday life easier, but it can also be an expression of one’s individuality. The additional equipment can tell us a lot about its owner. In Germany bells, saddle covers, helmets, and cycle clips are all subject to ever-changing fashions – distinctive features that cyclists willingly adopt.

Scottish objections – like “I’d love to take the bike sometimes, but Glasgow’s wind and weather...” Or, “Dalhousie Street is just too steep for me” – would fall on deaf ears over in Germany. Cycling in cities is an issue which is misunderstood on both sides of the channel. Germans, on the one hand, push the pedals even in rainwear to get from A to B. The stubbornness they share with their two-wheeled pack animals has brought them dedicated cycle paths and priority over other traffic in some respects. Scottish cyclists, on the other hand, dream of some space and clean air in which they can cycle freely. In the meantime, many more Scots stand at the bus stop until they are ready to drop – then show annoyance and impatience if their bus is slowed down by a stray cyclist. Both attitudes seem incorrigible. And that is exactly what they are. One is not better than the other. They are just typical.

Christin Klöppner is attending the teacher training programme at the University of Leipzig. Her subjects are English and Spanish. She was born in 1982 in Heilbad Heiligenstadt in the centre of Germany. After graduating from High School, she worked for one year as an au pair near Geneva, in the French part of Switzerland. In the course of her studies, Christin studied abroad for one semester at the University of Salamanca. Recently, she took up a six-months-internship at the Goethe-Institut in Glasgow.