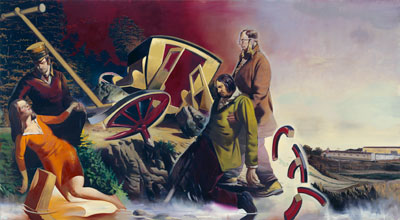 There’s hardly any other contemporary artist who enjoys such great popularity and reaps such harsh rejection and damning reviews: a major double exhibition in Neo Rauch’s home city of Leipzig and in Munich celebrates the painter’s 50th birthday and shows how his paintings have changed.

“If art has any purpose at all, it is to ignite a small flame – be it good or bad”, declared Neo Rauch at the opening of his exhibition at the Museum der bildenden Künste (i.e. Museum of Fine Arts) in his home city of Leipzig. His pictures provoke a great deal of controversy, because he insists on painting – and, what is more, he does so in the traditional figurative style, despite the fact that this is generally considered outmoded now that image production has been taken over by technical media.

A down-to-earth citizen of Leipzig, Rauch is one of the most prominent pioneers of a new triumphant advance in the world of painting, and has even become something of a “media star”. It is not his meteoric rise to fame, however, nor the market, nor the artist’s eloquence and not even his 50th birthday, explains curator Bernhart Schwenk in Munich, but the work itself that is the reason why the Pinakothek der Moderne (a modern art museum in Munich) is showing the other part of this double retrospective.

Rauch’s work has changed dramatically over the past 17 years – as a visit to either of the two exhibitions, each featuring 60 paintings, proves. The canvases originate mainly from private collections; public museums were initially hesitant to purchase Rauch’s work, and were subsequently unable to afford the soaring prices his paintings were fetching.

Vorführung (1996) is the title of the first canvas that confronts visitors at the top of the large staircase leading to the museum’s upper floor in Munich. It depicts a group of men around a table, on an incline, between an indescribably pink sky and the banal green beer crates that are being used as chairs. Is this an adaptation of the last supper motif popular among the old masters? Is it the artist who is now being betrayed? Rauch’s paintings intentionally avoid the obvious.

In Leipzig, the visitor walks down the stairs and encounters either Oktober (2009) or Weiche (1999). The idea here is to initiate a dialogue between works painted at different periods. The Munich curator is proud to be able to show a “different Rauch” in each room, and in each case makes a motto out of the picture’s title. The artist, after all, loves titles, which like his paintings cause the viewer’s thoughts to drift off into different directions.

Is it still possible to stage great world theatre with the tools of the painting trade?

In Neo Rauch’s painting, colour began in the late 1990s to conquer the black that characterized his early works – in a somewhat reserved manner which was interpreted as being faded. Das Haus (1996) is one of the wonderful paintings in which the artist plays with illusionistic and abstract image zones in virtuoso style, with intelligence and frequently also with irony, and uses graphical contours to maintain control over what is happening in the picture. He often incorporates snippets of conversation and speech bubbles into his works. Subsequent years see increased use of colours and formats, more and more people featuring in the pictures, and shades of gloom sneaking into what are sometimes even upbeat and cheerful moods.

A painting such as Das Unreine (2004) has the same sort of impact as a boundary stone. Dark cattle with human faces are bent down in the foreground of a dimly lit room. Thick rivulets of paint ooze decoratively down a wooden staircase while a fur-covered ham hangs on the wall. A man spoons soup into a tureen which is served by a small waist-coated man in the background. Is this a bitter persiflage of the art market?

From this point on, heavily significant figures crowd together on ever larger canvases. Is it really still possible to stage great world theatre with the tools of the painting trade? The artist attempts to do so on a three by five metre canvas entitled Revo, one of numerous paintings fresh from the studio, spelling out the word “Over” backwards on it. The picture has neither a spatial nor a conceptual centre, but diverging vanishing points.

Picturesquely splendid regions, terrains abandoned unfinished, eclectic assimilations and fantastical invented shapes can occur in one and the same picture, while canvases that were produced close together such as Ausschüttung (2009) and Schilfkind (2010) can appear so alien to one another that it is as if they were painted by different artists.

In the wake of the political turnaround, painting was frowned upon

In the wake of the political turnaround that promised such great changes, painting – especially that of East German provenance – became the subject of general suspicion: painting was frowned upon, and smelling of oil paint and turpentine became stigmatized.

Neo Rauch was 30 years old in 1990. Born in Leipzig, he grew up with his grandparents in the town of Aschersleben in Saxony-Anhalt because his parents – both of them art students – died in a train accident just a few weeks after his birth. From 1981 to 1986 he studied under Arno Rink at the Leipzig Academy of Visual Arts and then as a master student under Bernhard Heisig. He resigned after just three years from an honorary professorship he took up in 2005.

The abuses he suffered continue to generate potential for resistance even today. Neo Rauch turned his pictures into battlefields. And they have remained so. He plays through his battles in them – in art and as in life – using an arsenal of figures that accompany him. A protagonist that resembles him can be found in almost every one of his paintings.

The exhibition is not called “Companions” for nothing

It is above all the Americans’ fascination with his “post-socialist realism” that has earned Neo Rauch a worldwide reputation. As Leipzig museum director Hans-Werner Schmidt says, what is fascinating is that which is unfamiliar and disconcerting.

Neo Rauch’s success has encouraged numerous younger artists to return once again to painting, and has put Leipzig firmly on the world’s art map. At the same time, however, the double show provokes the question of whether Rauch’s oeuvre will survive.

A painting entitled Die Flamme (2007) portrays a man taking great strides; the windmill blades that are tied to his legs are beginning to come loose.

The exhibition “Neo Rauch – Companions” is being shown simultaneously at the Museum der bildenden Künste in Leipzig and at the Pinakothek der Moderne in Munich, until 15 August 2010

Exhibition catalogue, edited by Hans-Werner Schmidt and Bernhart Schwenk with texts by the curators, art historians and artists, and featuring an essay by Uwe Tellkamp, published by Hatje Cantz
Sigrun Hellmich
is an art historian, journalist and author. She lives in Leipzig.