It is not usual for the regulars at my local pub to fall silent. They are ready to guffaw at the worst possible jokes, chatter and wisecrack even when watching a crucial football game on the television in the no-smokers room. But when they gather on Mondays to play Skat, you could hear a pin drop. 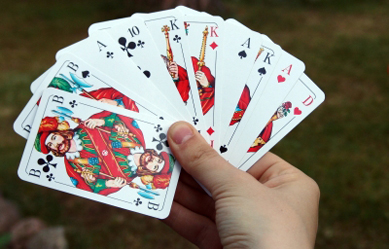 That is not the only thing to feel grateful for as Germany’s national card game celebrates its 200th anniversary. It is a game that is tangled up with the country’s history in a way that its rivals, poker and bridge, are not. The rules may seem impenetrable to foreigners but after a few hours of quiet observation you can usually pick up enough knowledge to play at least a losing hand. Three players (two against one), 32 cards (three hands of ten and two discarded cards), the ten tricks. I won’t try to explain all the rules. Suffice it to say that it is a game that depends heavily on memory, counting, logic and on being able to read the players. Luck has only a marginal role.

The chairman of the Stuttgart Skatfederation, Hans Schedler, says nothing irritates him more than when a player shouts out “I had a bad hand!” (“Ich hatte schreckliche Karten!”) If you lose at Skat, you can only blame yourself. “A good player doesn’t moan about his mistakes, he learns from them” (“Ein guter Spieler meckert nicht über seine Fehler, er lernt daraus”). The fact is you have to be able to concentrate. That is why publicans don’t much like the Skat players – the game does not encourage heavy beer consumption.

Germany is unthinkable without Skat 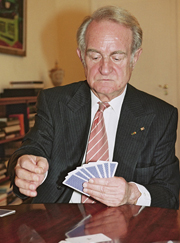 But he has to put up with it because Germany is really unthinkable without Skat. That’s why politicians who want to show that they are close to the grassroots take it up. The ex-chancellor Gerhard Schröder holes up in the North Sea island of Borkum for his summer holidays and since there is not much by way of entertainment up there, he plays Skat at the island pub and, as he admits, always loses. The late president Johannes Rau was a more successful player, as is the former head of the Left Party, Oskar Lafontaine. The Noble-winning novelist Günter Grass plays with Social Democratic colleagues and made the game one of the threads of his book The Tin Drum. All of which suggests that Skat may be a game tailored for political minds. It is difficult though to picture Chancellor Angela Merkel taking part in a Skatrunde. It began as a male-dominated game and though there are estimated one million female players (out of a total of 20 millions) in the German speaking world, it remains that way. One friend, a banker in his 40s confessed to me that “Skat made me into a man”. By which he meant, it gave him the ability to accept defeat and move on. 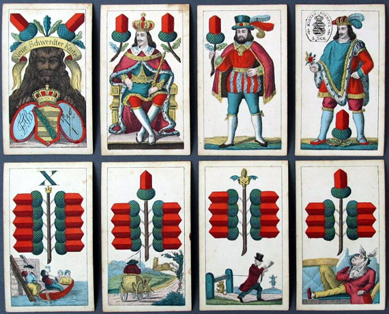 Originally, the game seems to have come from Italy. According to legend, the fundamental ideas were introduced by a coachman arriving from the south; he had played the game with his Piedmontese colleagues. Skat comes from the Italian word “scartare” to discard – and “scatola”, meaning a box for keepsakes. The game is a variant of Tarock – also sometimes called Tarot – and the ancient game of Schafkopf, or Sheepshead. But Skat was only formalised, one could say Germanised, in 1810 in the Thuringian town of Altenburg.

The best minds of the town sat around a table and worked it out – the grammar school director Johann Friedrich Hempel, the medical consultant (Medizinalrat) Hans Carl Leopold Schuderoff, the notary Friedrich Hempel and the court chamberlain Hans Karl Leopold von der Gabelentz. Occasionally, they would be joined by the publisher Friedrich Brockhaus (his encyclopaedias are standard works in Germany, even now). Why they had so much time on their hands is anyone’s guess. From Altenburg it spread to university towns and became a favourite student pastime. Germany was at the time living under the shadow of Napoleon and it was to stay a patchwork society of duchies and principalities until unification in 1871.

During those years different versions of Skat were played in the south, north and east of the splintered nation. But it had already established itself as an almost classless game and it was not unusual to see craftsmen playing with pharmacists and doctors. It was not uncontroversial: the philosopher Arthur Schopenhauer declared it to be a mentally bankrupt occupation, while Richard Strauss was so struck by its hidden order that he integrated a game into his opera, Intermezzo. 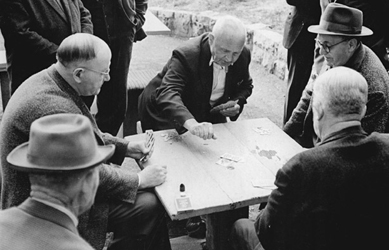 After Bismarck unified Germany, Skat too had to be unified. From 1886 national Skat-congresses – taken very seriously indeed – hammered out the rules. Should one bid (reizen) on the basis of colour or numbers? Skat became a metaphor for an emerging nation. Around the campfires before the Battle of Sedan (1870) Bavarian and Thuringian soldiers couldn’t even agree on the rules. But by the First World War – judging by the passages in Erich Maria Remarque’s All quiet on the Western Front (Im Westen nichts Neues) – Skat had become a cherished way of killing time in the trenches.

One of the hidden backchannels of German unification

The 11th and 12th Skat congresses in 1927 and 1928 finally codified the rules. Soon enough though German history was catching up, souring the game – from 1937 Jews were forbidden to play – and another generation of soldiers was shuffling the cards before going into battle. In divided past-war Germany, there were two Skats, an eastern and western version. The East German communists banned Skat clubs for a long period, fearing that the game could become a hub of subversive activity. Three players, all known and trusted to each other could be fairly certain that they had not been infiltrated by a police informer. 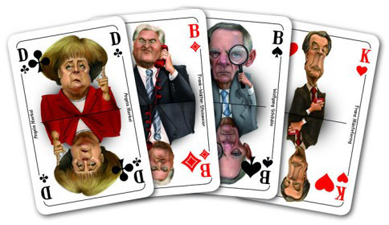 But over time, the communists relaxed and permitted Altenburg to resume its activities as a rule-maker and arbitration committee for Skat problems worldwide. That opened up a line of secret communication between Skat lovers in West Germany and East Germany: one of the hidden backchannels of German unification.

And so it is that Skat has survived and flourished even in the age of on-line poker and video-games. Kurt Tucholsky, the brilliant satirist form the 1920s, had already spotted that Skat had become part of the national fabric. “Wenn dem Deutschen so recht wohl ums Herz ist, dann singt er nicht. Dann spielt er Skat." ("When the German is feeling good, then he doesn’t burst in song. He plays Skat.”). As usual, Tucholsky got it right.

Roger Boyes
is Germany correspondent for the London daily newspaper "The Times". He has been living in Germany for twenty years and is author of the column "My Berlin" in the "Tagesspiegel". In his book "My dear Krauts" he describes the peculiarities of everyday life in Germany with typical British humour.

Do you have any questions about this article? Write to us.