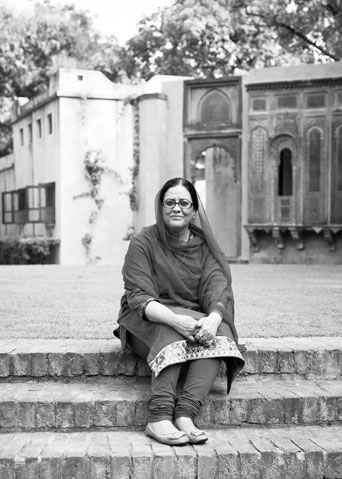 Foto: Goethe-Institut / Andrea Fernandes
Naseem Shafaie was born on December 25, 1952 in Srinagar, Kashmir. She completed her MA in Kashmiri and worked as Assistant Professor of Kashmiri for Higher Education, Govt. of J&K. She is now retired.

Naseem Shafaie started writing for magazines in the 1970s while still in college. Her first collection of poetry, Darie-Che-Muthrith was published in 1999. Many of the poems from this collection were then translated into different Indian regional languages as well as foreign languages such as Italian and Korean, besides English. Her second collection of poems published in 2007 is called Na Thasay Na Akx (Neither Shadow nor Reflection). She received the Tagore Literature Award (a joint award by the Govt of India and Govt. of Korea) for this.

In 2011, she was also awarded the Sihiyta Academy Award, the highest literary award in India.