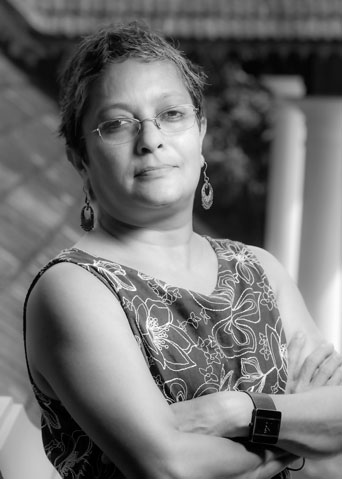 Foto: Goethe-Institut / Roy Sinai
Mamta Sagar, is an academic, poet, translator and playwright writing in the Kannada language. She has four collections of poems, four plays, an anthology of column writing, a collection of critical essays on gender, language, literature and culture in Kannada and English and a book on Slovenian-Kannada Literature Interactions to her credit.

A recipient of the Charles Wallace Fellowship 2015 at UK, Mamta Sagar has toured with Mark Gwynne Jones in India and UK on ‘Melding Voices’, the UK Arts Council Funded projects. She has participated in ‘Literature Across Frontiers’, international poetry translation workshops, collaborated with translation activity in many Indian and foreign languages, engaged in collaborative performances with artists and poets, translated poetry and prose into Kannada and English and has been 'Poet in Residence’ with Auropolis, Belgrade, Serbia.

Worlds Literature Festival 2015 hosted by the Norwich Writers Centre opened with Mamta’s poetry presentation. She was invited to present a provocation at this festival. Ledbury Poetry Festival 2015 showcased poetry performance by Mamta.

Her poems are widely translated into most of the Indian as well as several foreign languages and have also been published in those respective languages. Her latest book ‘Hide & Seek’ is a collection of her poems translated into English with source text in Kannada.

Mamta Sagar has conducted poetry workshops, curated poetry events, invited and organised events in India for poets from Senegal, UK, Malta and Slovenia. She has collaborated and performed with artists and poets from India, UK, Australia, Philippines and Vietnam. She has presented poems at poetry festivals including Ledbury and Norwich in UK, STRUGA in Macedonia, Poetry Africa in South Africa, Granada Poetry Festival in Nicaragua, Medelline International Poetry Festival in Colombia, in Cuba, Serbia, Slovenia, Vietnam and Sri Lanka.

Mamta is a columnist with Bangalore Mirror. She teaches at the Centre for Kannada Studies, Bangalore University, and lives in Bangalore.