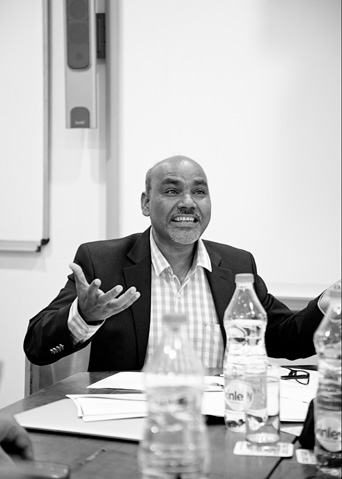 Foto: Goethe-Institut / Soumya Sankar Bose
Basudev Sunani Born in 1962 in the remote village of Maniguda, in the district of Nuapada, Odisha, Basudev Sunani is an Odia poet of growing repute.

He has authored seven poetry books, three essay books, short stories, a biography, one novel and translated a book on Mahatma Jotirao Phule which has been published by National Book Trust, India. He has edited two books - Buddhism and Dalit: Vision of Modern India and Odia Dalit Literature. Many of his works have also been translated into English and several regional languages such as Hindi, Gujarati, Bhojpuri, Punjabi, Tamil and Marathi.

He has received numerous State and National level Awards such as Bhubaneswar Pustakmela Puraskaar, Bhubaneswar, Basanta Muduli Puraskaar and Gyanada Kabita Samman. One of his most prestigious awards is the one given by the Book Sellers and Publishers Association of South India (BAPASI) “Muthamizh Arignar Kalaignar M.Karunanidhi PORKIZHI AWARD-2015”