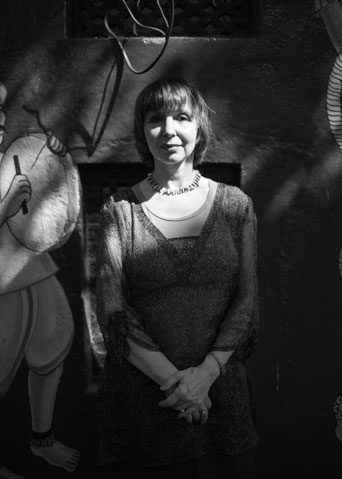 Foto: Goethe-Institut / Vivek Muthuramalingam
Sylvia Geist was born in 1963 in Berlin. She studied Chemistry, German Studies and Art History at the Technical University of Berlin. In 1989, she moved to Hannover. Today, she lives in the Uckermark region and Vancouver.

Geist works as an editorial journalist and reviewer of the Financial Times Germany as well as editor of Middle-eastern European Literature. She writes poetry and prose (fiction and essays) and also translates works from English. Her translated works consisting of poems by Peter Gizzi, Chirikure Chirikure as well as contemporary poetry from South Africa have been published. Short prose and poetry of Sylvia Geist have been translated into various languages including French, Polish, Belarussian, Slovakian, Arabic and English.

Her language is characterized by a mix of linguistic styles, a parallel between pathos and brevity: the precision of scholarly denotation: the agitation of the vernacular and last but not the least, the extreme condensation of the language of poetry.