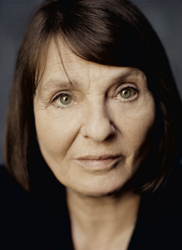 Monika Maron was born in 1941 in Berlin, grew up in the German Democratic Republic, moved to the Federal Republic of Germany in 1988 and today again lives in Berlin. Her published novels include Flugasche, Die Überläuferin, Stille Zeile sechs, Animal triste, Pawels Briefe. Eine Familiengeschichte, Endmoränen and Ach Glück. She has received numerous prizes for her talent as a narrator and essayist, including the Kleist Prize (1992), the Friedrich Hölderlin Award (2003) and the German National Prize for Art and Science (2009).

The narrator of this novel remembers for the last time the love affair she experienced in the summer of 1990, when she was no longer young but not yet old. After her lover leaves her she withdraws from the world, and from then on she plays back in her memory the time she spent with him as an unending love story. The end of the dictatorship reveals the structure of her life as absurd, and the newly gained freedom no longer fits in with the rest of her life, but instead throws into question the decisions she has made about her life so far. Her love for Franz, who grew up on the other side of the Berlin Wall, becomes an obsessive passion that leaves no room for refusal or for consideration of the feelings of others. The heroine of the novel conjures up love as the ultimate anarchic meaning of life, which disregards every kind of existing order and instead creates its own order.