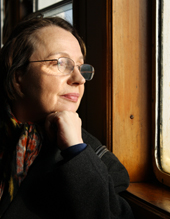 Katja Lange-Müller was born in 1951 in East Berlin, where she was expelled from school at the age of sixteen for ‘un-socialistic behavior’. After training as a typesetter, she worked as a picture editor at the newspaper Berliner Zeitung and as a prop master for an East-German television station. She then worked for several years as a nurse in various psychiatric wards. In 1979 she began studying literature at the Johannes R. Becher Institute in Leipzig, and spent an exchange year in Mongolia in 1982. Upon her return to the German Democratic Republic, she worked as an editor for the publishing company Altberliner Verlag. In 1984 she fled to West Berlin. The city remains her home today.

West Berlin, 1987: Soja is a trained typesetter who has fled from East Germany and now works as an assistant florist. She is also a woman with a heart of gold. One day she meets Harry – tall, independent, quietly determined, with a dark past and a murky future. From now on, her life will be determined by his fate.