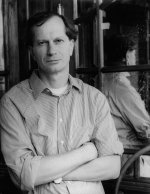 Josef Winkler was born on March 3, 1953, in Kamering near Paternion in Carinthia, Austria. After graduating from high school he took courses at the Commercial College in Villach for three years. His first job was in the office of a dairy in Oberkärnten; subsequently he attended evening school at the Abendhandelsakademie in Klagenfurt, working during the day at a publishing company specializing in novels by Karl May. In 1971 he joined the administrative department of the new College of Educational Studies in Klagenfurt, attending lectures in philosophy and German literature in his leisure time. Josef Winkler has been a freelance author since 1982 and has received many accolades, including the 2008 Georg Büchner Prize and the Great Austrian State Prize in 2008. He lives and works in Klagenfurt.

“Figs, fresh figs!” shouts a fat Roman matron in front of the gates of the Vatican. Standing next to her is a man with a shaved head who wears a T-shirt printed with the message “Mafia: Made in Italy” and holds up, impaled on a stick, a small plastic tribal head for the passing pilgrims to see. In his “Roman novella”, Josef Winkler describes the city in overpowering images that the reader can feel, smell, hear and see. He writes about the places where Rome is at its liveliest: the busy weekday market on the Piazza Vittorio Emanuele, and the square in front of the Vatican where people wait and lounge around on Sundays. Among those who are waiting is the market woman selling figs and her handsome son Piccoletto, who works on weekdays for a fish dealer on the Piazza Vittorio Emanuele. Winkler’s tale of this world and how it is pulled – for one seemingly endless moment – into the undertow of Piccoletto’s fate is breathtaking.