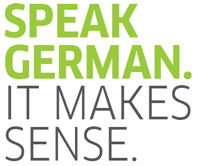 In a world growing smaller by the day, diversity is a fact of life. Information, culture, and progress are the hallmarks of a global consciousness, of people sharing knowledge and achievement.

To communicate effectively and better understand the complexity of the modern world, one language is not enough.

But one language certainly can help: German.

And there are good reasons for this.

Some of the world’s greatest writers, composers and philosophers all worked in German

103 Nobel prizes have been awarded for work done in German

Over 94,000 new books are published each year in German

The largest population in the EU speaks German

The fourth largest economy in the world does business in German

Some of the leading research in biotechnology, nanotechnology, Computer science, biometry, aerospace, electrical engineering, and logistics is conducted in German

So if you’re looking for a second language, the first to choose is German.

SPEAK GERMAN. TALK TO US.