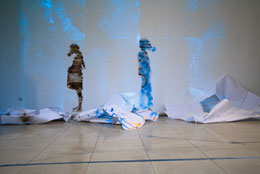 "You are 10
And you can take a Kalashnikov apart in 3 minutes
and put
it back together again."

Hardened towards violence, weapons, and war, with killing as a means of political manipulation: Antidot (Antidote) presents a dark, sombre work before and after the fall of the Wall. The Republic of Moldova became independent after the Soviet Union collapsed, but Esinencu is describing a country on the margins of Europe where the old mentalities and the cynicism of those in power have continued unchanged.

Premiere on 28.11.08 in Centrul Constantin Brâncuşi – Chişinău, Republic of Moldova

COPENHAGEN: „Fremtidens Historie“ (The History of the Future)