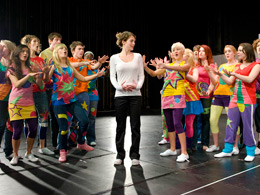 I have always used playwriting as a catalyst rather than as an end product. I originally started writing when the interest groups I was doing applied drama work with kept asking to if they could put on a ‘real play’. I wrote the plays so that they connected directly with each group’s hopes, fears and concerns, challenging them and yet offering them choices. One of these plays The Big Heart was a finalist in the Contact Theatre playwriting competition in Manchester and from then on any group or class I worked with wanted me to write a play for them.

I believe young people often feel overwhelmed by a sense of powerlessness, that for them the ability to bring about change appears too huge an exercise, a feeling exacerbated by the sense of ever increasing global economy and the local loss of cohesive community. But, I believe, if they are helped to recognize and take control of seemingly small moments or events they can bring about change and consequently begin to feel they have some control over their lives. Otherwise all they can look forward to is being part of the blame culture, a culture quick to blame the outsider.

In the play Not Yet I attempt to use the anniversary of the fall of the Berlin wall to illuminate the present and explore the possibility of cultural change. With the expansion of the European Union we need to be at our most culturally flexible and yet, in the popular media, reporting of the expansion often aims to fuel our fears and insecurities. If the play Not Yet can disturb – just a little - any of the negative assumptions which young people often are fed by the popular media, then that is all a playwright can ask.

Interview with Sarah-Jane Dickenson about "Not Yet"

Sarah-Jane Dickenson about the wirting process of "Not Yet"