Sherko Fatah – At the Breaking Edges of Cultures 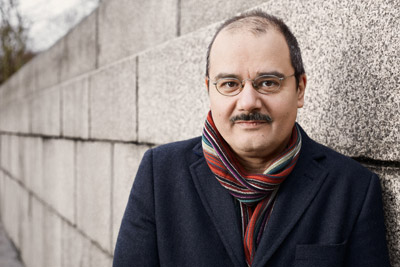 In honouring Berlin writer Sherko Fatah for his novel “The Last Place”, the Chamisso Prize comes into its own. 2015 couldn’t have started better for Sherko Fatah, born in East Berlin in 1964. Soon after receiving his home town’s Great Art Prize, the jury of the Adelbert von Chamisso Prize selected him as this year’s winner. About time, too, you might think. After all, Fatah has produced six remarkable novels since 2001, all of them revolving around the same topic: the experience of war, terror and violence. That the interest in his oeuvre is mounting at this very time may well be due to the political climate, considering that his latest novel The Last Place (2014) is once again set in Iraq, a country torn apart by war and violence that four million people have left behind since the 1990s. However, nothing could be more wrong than assuming the author simply appropriated a highly topical subject matter in order to exploit a politically volatile issue.

The son of an Iraqi Kurd and a German mother, Sherko Fatah grew up in the GDR. In 1975, the family first moved to Vienna, then to West Berlin, where Fatah studied art history and philosophy. His familiarity with Iraq and especially the Kurdish areas arises from his many visits to relatives, in particular to Suleymania, a city located at the Iranian border. Yet questions of Islamic identity aren't at the forefront of his books. “My father was a socialist”, the eloquent writer stresses before embarking on a little historical side note. How cosmopolitan the region was under Ottoman rule, with large Jewish communities in Baghdad and Damascus. The trouble began with the appearance of the British colonial power, though of course that wasn’t the only cause of the atrocities. In his books, Fatah offers a more nuanced view than virtually any other writer. Naive young men often take centre stage, fellow-traveller types who end up suffering every conceivable brutality. Initially, a range of options seems open to them: a humble but honest bourgeois existence, a dangerous yet lucrative life as a smuggler, joining one of the fighting groups or eventually fleeing into exile. Fatah stays close to verifiable facts. His novels are becoming historically ever more specific. Their scope is far-reaching, as previously demonstrated in his novel A White Land (2011). It deals with a largely unknown chapter of World War II. Fatah refers to the collaboration of the so-called Reichsführer-SS Heinrich Himmler with the Grand Mufti of Jerusalem. This collaboration culminated in the formation of an Arab SS division that was deployed on the German Eastern Front, among others. Critics have accused this novel – as well as Fatah's other books – of an excessive depiction of violence. However, it is precisely in exploring different forms of expressing violence that Fatah’s strength becomes apparent: How the serene description of the Kurdish mountain landscape suddenly turns into naked horror when Saddam's bands of soldiers throw people from helicopters is described with shocking intensity.

In his books, Fatah anticipates the events that fill our newspaper columns these days: the flourishing abduction business, the cruel executions in front of rolling cameras. The two protagonists of The Last Place, German archaeologist Albert and his translator and driver Osama, are abducted by armed men. Worn down by torture and uncertainty, their hopes of rescue are dwindling. They struggle to understand and make themselves understood, they distrust each other, they accuse each other of betrayal.

Truly the stuff of thrillers, and occasionally the author leads his readers down this path only to take them in an entirely unexpected direction a short time later. For Fatah, it is about the “asymmetries that arise at the breaking edges of cultures”. What weighs heavier, trust in each other's help or cultural identities and barriers? Only a writer with a biography like Sherko Fatah’s could think up such constellations. Albert and Osama, both disillusioned, albeit for different reasons, fail to save themselves because of their distrust. Even if Fatah leaves the ending open, it becomes clear that while understanding is attainable at certain points, the relationship between West and East is too complex to escape the vicious cycle of projections and attributions of blame. In this sense, there has rarely been an awardee in the history of the Chamisso Prize who fulfilled both the charter and the necessity of the award as completely as Sherko Fatah.


Every year, the Chamisso Prize of the Robert Bosch Foundation awards books written in German by authors with non-German roots. Sherko Fatah’s novel The Last Place was published by Luchterhand. Two development prizes are awarded in addition to the main prize. In 2015, these will go to Olga Gryasnova and Martin Kordić.
Bernd Zabel
covers literature and translation for the Goethe-Institut.

Any questions about this article?
Please write to us!