“Diversity is very appealing” – a conversation with Célia Šašić 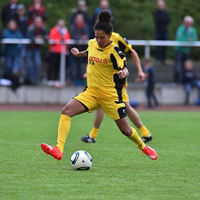 Until 2015, Célia Šašić was the forward of the German women’s national football team. She was named not only Germany’s but also Europe’s 2015 Player of the Year after receiving several prizes for her excellent performance. Everyone was surprised by her departure from football. Since 2010, Šašić has been active as the German Football Association’s Integration Ambassador.

These differentiations are the same in men’s as in women’s football. Most clubs or countries have a philosophy or idea of football that is usually nation- or culture-specific and not determined by gender. German women play in a typically German style and the Italian women play just as Italian as the men’s teams.

By virtue of your personal performance in sport, you have celebrated some major successes. You’ve been German Footballer of the Year twice and in 2015 you were named Best Women’s Player in Europe. For us, your departure from active football came as quite a surprise. You’re in your football prime. What moved you to end your football career at only 27?

I’m asked that question often and my answer is always the same. After a very successful decade-long career, I simply want to dedicate myself to other things in life. With the birth of my first child, I’m looking forward to the new challenges that await me. Nevertheless, it was an incredible time that I will never forget and that made me who I am. 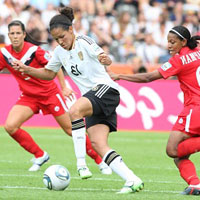 Football is and will always be a part of my life. I love this game. And just because I am no longer playing as a professional doesn’t mean that football is no longer important to me. I hope that I can continue to be active in football in another role in future.

The Bundesliga is very multicultural. Footballers from all over the world play in the men’s teams. The same is true of the women’s teams today. Do you see advantages or rather disadvantages in this? Doesn’t this blur whatever represents the national virtues of teams? 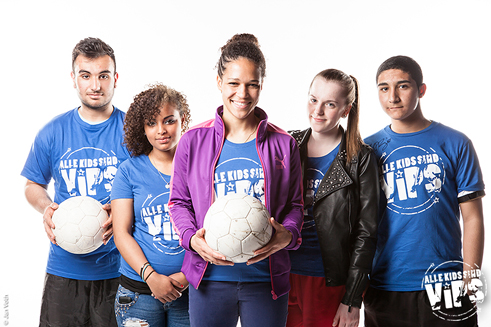 On principle, I always consider it an advantage when people from different cultures encounter one another, since each of them can only profit from it and things arise that would otherwise not be possible. This diversity is very appealing and it was always a lot of fun for me personally to play with international players. And just because you expand your horizon a bit doesn’t mean that you are no longer true to yourself or neglecting some virtues.

Aside from our famous national goalkeeper and the keeper for Arsenal, Petr Čech, do you know any other Czech footballers? What experiences have you had with Czech football?

Of course I do. There’s Pavel Nedved, Tomas Rosicky, Jan Koller, Milan Baros and Poborsky, all players who were very successful internationally. But I sadly do not know any female Czech footballers and was never able to play against the national Czech team.

The interview was conducted by Teresa Weiser, an intern at the Goethe-Institut in the Czech Republic.