Migration: Hightailing It Out Of Germany?

An official migration review shows that at the moment more and more people are emigrating from Germany rather than immigrating to the country. There are all kinds of personal and occupational reasons for this development. Nevertheless the return of the emigrants is often a foregone conclusion.

Good bye Deutschland – die Auswanderer, Auf und davon and Mein neues Leben – these are the successful German equivalents of reality TV shows like No Going Back in Great Britain that are followed every week by millions of viewers. They tell the tale of Germans who move to other countries in Europe, in America or Australia, for example. They are either stories about singles or families who make a successful, new life for themselves in the new country, stirring a yearning for far-away places in those who stayed at home, or about failures that provoke a certain malicious joy in the viewers.

These TV images however are more often than not the exception – the reality is much less spectacular. In 2008, according to statistics from the Federal Agency Of Migration and Refugees, 770,000 people left Germany to live in another country and, vice-versa, 680,000 newcomers were registered as immigrants. For Germany, with its population of 82 million, this means a “migratory loss” of about 90,000 people. Three-quarters of the emigrants were foreigners who live in Germany. Most of them are retired and are going back to the land of their parents. In the target year of 2008 174,000 of these “birds of passage” held German passports. They, too, had come mostly from Turkey to work in Germany and many of them had been in the country since the 1960s – they, too, can therefore be classed more as returnees rather than emigrants in the general sense of the word. There are no official statistics on the number of “natural-born” Germans however who have exchanged their roots that go back over generations for a new homeland.

The figures are deceptive 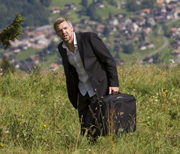 Marcel Erlinghagen, a migration researcher at the University of Duisburg-Essen, has pointed out a few other statistical irregularities: the official register of residents does not provide nay information on whether a person has left the country on a temporary basis or whether he or she has gone for good. We can safely assume that the tens of thousands of students who spend a term or two at a foreign university every year have left the country only on a temporary basis. In the same way German companies often send specialised employees and management personnel to foreign markets only for a few years at the most; people in the know refer to this as “circular” migration – back and forth every now and then. These global players on the world labour market (“cosmopolitans”) are motivated in a completely different way compared to the emigrants.

“In contrast to the past two centuries, for the past 40 or 50 years emigration has not taken the form of a wave phenomenon with temporary peaks and regional focuses in areas of economic distress,” says Gabriele Mertens from the non-profitmaking Raphaels-Werk – an organisation that has been the leading consulting agency for emigrants since 1871 and since 2009 has also been one of the main personnel consultants for German export companies. “These days every case is a highly personal, unique case when it comes to motivation and aims or weighing up the pros and cons.”

The German labour market has a few structural characteristics that can in fact be of benefit to the quest for happiness elsewhere. The classic example is that of doctors who are welcomed with open arms in countries like Switzerland or Scandinavia – places other people go to for their holidays. The health system in Germany in contrast has long since reached the limits of its growth; hospitals are being closed down, the costs of running individual practices now have to be budgeted, leading to a capping of income. Nevertheless figures show that emigration among doctors is more of an exception; in the year 2008 only about 3000 doctors from an overall national total of 320,000 turned their back on Germany, 2000 of whom were foreign passport holders. The other way round, at the moment there are more than ten times as many foreign doctors practising in Germany – about 22,000 of them.

Multicultural mix has the edge

Today there are about seven million people who come from an immigrant background living in Germany. In the meantime however their children and grandchildren, who have been through the German education system or done vocational training, who have graduated from a German university and gone through the multicultural experience, are now very often attracted to working in the land of their fathers, often for a German export company. Poland is an example of this – a member of the European Union that is enjoying a clearly higher rate of economic growth at present than Germany. The University of Regensburg has a special scheme for supporting, what they call “Secondos”, second-generation immigrants. The second year of its three-year bachelor’s degree course is spent at a partner university in another country, culminating at the end of the course in a bi-national qualification and a job abroad.

Against the background of the global financial and economic crisis concern among immigrants about their children finding a job in Germany has become particularly widespread. This was ascertained in a recent study conducted by the independent German Institute for Economic Research. At the same time welfare services are also being cut back. The fear of a losing income and being socially downgraded is rife.

“All this gloom and doom is the main reason for the motto “Goodbye Germany”, explains social scientist, Erlinghagen. “Most of them however don’t get any further than venting their growing social dissatisfaction in this somewhat damning expression. Only a few of them in fact really want to swap their lives in Germany for one in another country.” Incidentally there has already been a follow-up on German TV to the first “Goodbye” reality shows. It is called Die Rückwanderer (The Returnees) and was not quite as successful as the first series.

Hermann Horstkotte
is an education journalist living in Bonn.