In the Refugee Camp, in Istanbul: Art is Everywhere 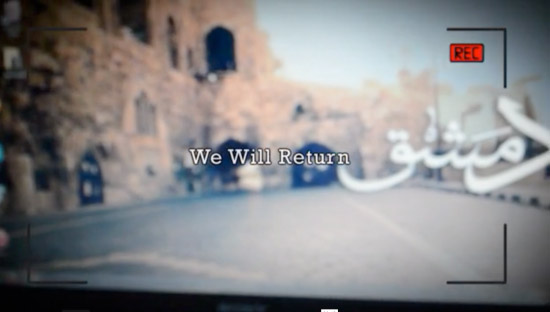 Turkey is overrun by refugees at present; nearly two million Syrians have sought refuge from violence and war here. The local Goethe-Institut is also responding to the situation, attempting to do cultural work for the refugees in theatre workshops, film projects and language courses.

“An unprecedented refugee disaster” is what Christian Lüffe, the director of the Goethe-Institut in Istanbul, calls the situation in Turkey. Many merely want to pass through; some stay, more are following. All of them need to be supplied with the basic necessities, but almost as importantly: with the arts.

The Goethe-Institut is therefore supporting children and teenagers in refugee camps in eastern Turkey, 20 kilometres from the Syrian border, who are living there in desolate conditions. For them, the theatre projects are a ray of hope that can give them strength. Meanwhile in Istanbul the institute is offering film projects and workshops for refugee filmmakers and artists as well as language courses for refugees who have received residence permits for Germany. We spoke with Christian Lüffe, the institute director.

Mr Lüffe, are you able to continue your work after the series of attacks in Istanbul? What’s the situation?

Given the armed conflicts we have to weigh it every day. We are in constant contact by telephone with the staff of our partner in Mardin in eastern Turkey, the NGO Her Yerde Sanat (Art Anywhere). At present, Mardin appears less at risk than other cities in the Syrian and Iraqi border region. Nevertheless, the current overall situation makes our activities more difficult, of course, because the permits must always be newly obtained there.

How can work with the arts support refugees?

Art can do something very important that is frequently much underestimated: it gives people something new to think about and requires creative concentration. In this way it can contribute to rekindling creativity and developing new perspectives. Playing music, painting or dancing can help to break through the everyday thought cycle and to dispel the numbness of trauma.

What is the work of the Goethe-Institut targeting? 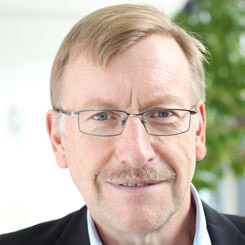 At present, we have two focal points: one in eastern Turkey, 20 kilometres from the Syrian border, in a refugee camp near the city of Mardin. We have been working mainly with children, teenagers and young adults there since December 2014. Mardin has about 150,000 inhabitants and 100,000 urban refugees have arrived there. There are also other camps nearby with thousands of refugees. We consult with trauma experts for all of our initiatives and collaborate with organizations that coordinate aid on location.

In Istanbul, where there is an entirely different situation, we mainly work with artists and filmmakers who were forced to flee from Syria. We offer them things like theatre workshops and film projects.

How are things in the refugee camp?

There are hardly any trees and it is incredibly hot in the summer, but even if every family has only 20 square metres of living space, at least they have clothing and food. As for education, the supply is far worse: there is one schoolhouse with 10 classrooms for about 1,500 children. In addition, the refugees are only allowed to leave the camp every 14 days for six hours at a time.

So, what are you doing exactly?

For example, we organize hip-hop seminars with a German-Turkish rap artist, we offer music therapy and in the second semester also a workshop on teaching trauma victims for the camp teachers. This workshop is run by a lecturer from the Institute for Victims of Torture in Berlin who speaks Kurdish and Arabic.

As said, we are also working very closely with an NGO with experience in this field (Art Anywhere), which is active in circus, music and art education for children. Together with this NGO, for several months we have regularly invited artists here, for example experienced theatre teachers from the group Die Stelzer in Landsberg/Lech, Germany. They offer stilt workshops in the refugee camp and produce performances with the young refugees.

Sure! Two or three instructors go there and meet a group of teenagers. The principle is teaching the teacher, so we teach these teens how to walk on stilts and they go back to camp and teach others. The practice all day, sew costumes from fabric we provide and have had performances and parades in Mardin and even neighbouring towns. We are particularly thrilled that the Mardin Giants, as they now call themselves, have been invited to a youth circus festival in Istanbul.

For many youngsters it’s a special feeling to be a metre and a half taller than everyone around them; to see things from the bird’s eye view. The joy that their demonstrations trigger among the younger children in the camp and the enthusiasm of the adult audience strengthens the self-confidence of the young artists. Others go about it more pragmatically: they’ve specialized in using their stilts to paint roofs because they don’t need ladders. And then they proudly send us videos they shot on their mobile phones.
In the meantime, our Bavarian teachers are learning from the refugees, who have combined their own traditions with the stilts. Young men perform Kurdish folk dances on stilts and showed the teachers their steps. 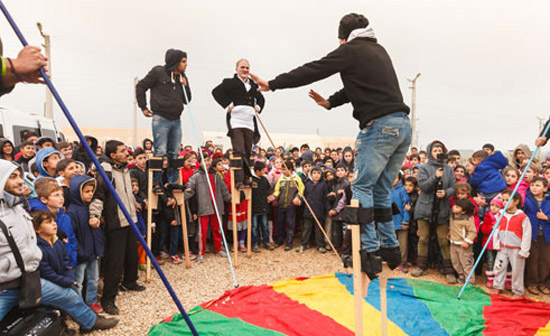 Tell us about your work in Istanbul.

We are collaborating in Istanbul with the Syrian-Turkish institution Diyalog. Two German journalists and filmmakers who work frequently in the troubled Syrian-Iraqi region are also involved. This initiative focuses mainly on young artists who fled from Syria and are now forced to remain in Istanbul for a longer period. Under the title Searching Traces they are recording their own refugee stories in film workshops – some satirically, some as documentaries. Others are taking part in dance and theatre workshops.

But it is just as important for us to teach the language to those who have already received residence permits for German speaking countries. The UN refugee agency, with whom we work in close cooperation in Istanbul, sends us these refugees and we hope that our courses make their arrival in Germany easier both from the language and cultural perspectives.

These are young people with artistic ambitions who were studying subjects like film, dance, art or theatre in Syria before they fled the country. One of the participants in our film workshops, for instance, won a prize at the documentary film festival DOK Leipzig. But many of them consider Turkey as a stopover on their way to other countries. A young filmmaker we worked with here just went to Vienna. Another artist is now in Greece. It is difficult to establish something permanent. Many are very concerned about their futures.

Workshops for artists who were forced to flee – isn’t that a drop in the bucket?

Definitely, it is. But the solution can’t therefore be to do nothing. The NGOs working in this field, including the traditional humanitarian aid organizations, are aware that they can only do a fraction of the work that is needed – and we all meet once a month in Istanbul to stake out our work fields and sound out synergies. A large number of initiatives are involved, each in their own field, but it remains an unprecedented refugee disaster. We see this on the streets of Istanbul every day.

What are your hopes for the future?

We are trying to raise additional third-party funds for our projects. We have already had responses from private initiatives, which are paying some teachers’ fees. Most of all, we hope we can continue our work in spite of the sadly recurring outbreak of the Kurdish-Turkish conflict.

On The Latest at Goethe you can find more features, reports and interviews from around the world.