Munich Literature Festival: Engaging in dialogue with refugees through literature 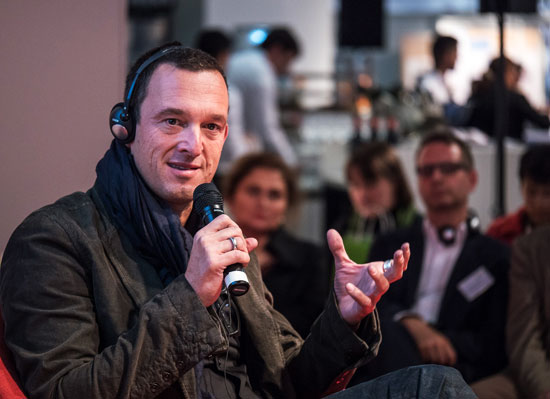 Between 18 November and 6 December, the Munich Literature Festival with forum:autoren curated by Albert Ostermaier will show how dedicated and political literature can contribute to engaging in dialogue with refugees. Every refugee, every expatriate brings their story with them. Literature can translate destinies, build bridges of understanding and express fears.

The Munich Literature Festival will offer a platform to more than eighty authors from all over the world, including António Lobo Antunes, Umberto Eco, Péter Esterházy, Judith Holofernes, Adolf Muschg, Salman Rushdie, Zeruya Shalev and Feridun Zaimoglu, between 18 November and 6 December.

front:text — an invitation to involvement

Ostermaier dedicated his festival contribution front:text entirely to the goal of “engaging in dialogue with refugees.” This is intended to occur at three levels. The first is by inviting German and international authors who come from regions of conflict themselves from which the majority of the refugees are currently coming to Germany.

Then, in cooperation with the Goethe-Institut, Ostermaier sent authors to hot spots and asked them to tell about their experiences there: an invitation to involvement, to expose oneself to the situation and to process what they experienced and saw in literature.

Finally, refugees presently living in Munich will appear in person: in literature workshops, in a poetry slam and a football match organized by Ostermaier, who is the goalie of the German national writers’ team.

The Sixth Munich Literature Festival will be opened on 18 November by the Lebanese poet Adonis, the secretary-general of the Goethe-Institut Johannes Ebert and Albert Ostermaier.

Mr Ostermaier, how did it come about that you dedicated the programme of forum:autoren entirely to the refugee issue?

It began with a journey to Lebanon and a visit to a refugee registration camp there. Otherwise, we are conditioned by media images. We are familiar with the images from refugee camps and create a protective filter we use to sort things or keep our distance with. But when we are there all of a sudden, when all of these protective filters are eliminated and we find ourselves exposed very directly to it all and we meet the people, we grasp that each of them has their own story and that they are not abstract numbers or statistics, but that each individual person has their own destiny, their own reason for fleeing and the story linked to their flight.

What does this mean for literature? How can literature behave faced with this large number of refugees?

In this context, literature can play an important role because it is a translation. It can tell the untold, make the invisible visible and in the best case be tremendous. Literature can zoom in on the destinies, the stories of people who have fled their countries and bring them closer to us as human beings. It can break down prejudices.

“Literature can see inside minds and hearts”

Literature doesn’t necessarily need to have any political agendas, it doesn’t need to be electable, but rather can show attitude, can confront and provoke. It also can express fears. In the context of this issue in particular, we see so many fears buzzing about and we are surrounded by prejudices, superficial knowledge, false attributions, by fears and by hate. Here in particular, literature is important because literature can see through all of that and make it comprehensible to a certain extent. Literature can see inside minds and hearts.

You placed forum:autoren under the motto of dedicated and political literature. Was this also an invitation for the authors who are appearing there to become involved?

Unfortunately, these terms are so petrified and hardened, that we associate political or committed literature with bad literature, with simplistic literature that either cheaply relies on provocation or prescribes to only one predefined truth. For me, however, any literature that is precise, that is exact, that describes our present, is political.

When it comes to literature, I was socialized by Georg Büchner: Büchner was always a political and at the same time a highly literary author. As someone who was fascinated by language and who wanted to work with the language, the terms of politics and poetry for me were never opposites, but always belonged together.

“Munich will not be the same Munich”

You live in Munich and you love this city. How has the arrival of the refugees changed Munich?

For me it’s quite clear that Munich will not be the same Munich and that the city is now and henceforth in a new era. There will be major mutation and metamorphosis and I see that very positively. Munich is often equated with conservatism, but this is not true at all. Munich has always been a city that is very dedicated, very open and curious, with a much more liberal history – remember the Bavarian Council Republic – and that means that Munich is now returning to these roots.

In recent years, there’s been great lethargy, great isolation, the city has been smothered in prosperity and there was a great yearning for meaning. Therefore, for many the experience of being able to do something themselves and break out of their permanent impotence and consumerism was a good thing. The influx of other people, other ideas, other cultures and other necessities will only do this city good. We otherwise only know this from the Oktoberfest, to which people also come from around the world and Munich is suddenly marked by internationality and exchange.

You also stress that we in Germany are not only the givers and the refugees the recipients, but that this relationship can be reversed: the refugees are a gift.

The refugees bring themselves, they bring gifts with them when we receive them as guests, they bring their culture, their experiences. Of course, they also bring along the urgency of flight and thus also the telling of what happens when a society tips into civil war.