The Goethe-Institut’s CINEMANYA film cases have been in use across Germany for media education work with refugee children and teens since 2015. In the year 2016 alone, they reached over 10,000 youngsters. A visit to a film screening at the initial reception facility of the German Red Cross in Hamburg offers insights into the work of the volunteers.

When the lights go out and the film begins, the room suddenly becomes quiet. A moment ago, about 20 children from several countries had been making a commotion, but now they are sitting very quietly in a semi-circle around a small screen. The screening of the films at the initial reception facility of the Hamburg-Harburg district chapter of the German Red Cross in the Stellingen neighbourhood is a welcome change for the children from a daily routine made up mostly of waiting and uncertainty.

“We’ve held events in far larger auditoriums,” says Reiner Jodorf with pride. Together with his wife Iris Alimci, the 63-year-old social education worker is a sponsor for the CINEMANYA film cases. Forty of them are in circulation all over Germany and are intended to help the refugees on their arrival here. Film case sponsors make a variety of films accessible to children and teens, who, due to their experiences with war and flight, may become frightened in the darkness of a film screening. For this reason, the sponsors are prepared for their volunteer work in seminars focusing on trauma.

The cases are filled with 20 German-language feature films that are subtitled or voiced-over in Arabic, Persian (Dari) and German. They include hits like Ostwind (2013) and Hände weg von Mississippi (2007) as well as the school comedy Fack ju Göhte (2013). For the younger viewers there are an additional two nonverbal short film programmes.

The shorts are also shown at the film screening in Hamburg. One of the visitors is 14-year-old Palestinian Yara, who is accompanying her Syrian girlfriend Yamama. The two hope that they and their families can soon move out of the austere containers they have been housed in for months and into their own flats. Yara likes the freedoms she has in Germany that she did not have as a girl in Saudi Arabia, where she previously lived, explaining, “I don’t have to wear a veil anymore and can even play basketball in the open.”

Today, Reiner Jodorf and Iris Alimci brought along an assistant, 17-year-old Salman. The Somalian youth came to Germany alone and is now living in a supervised shared flat for young people. He learned to produce short films at school and helps the couple frequently. Each film case screening is different depending not least on where they are held and who attends them. The sponsors first have to search for project partners; places like accommodations for refugees, schools, youth centres or social and cultural institutions. “You need to make contacts, maintain networks and organize the technical equipment if it’s needed on site,” says Reiner Jodorf.

Every CINEMANYA screening is special

Flexibility is important, says film sponsor Annette Linneweber. The artist and journalist from Saarbrücken has been active in refugee aid for three years. Every time, the circumstances are different, she reports. Sometimes the age restrictions are not observed by the families, sometimes there are anxious debates over the content. In the feature film Goethe! by Philipp Stölzl, for example, there is a lengthy kissing scene. Some wanted to leave the cinema when this was announced beforehand. But Linneweber persuaded them to stay. “Afterwards, one family thanked me,” she says.
The LiteraturInitiatve (LIN) in Berlin pursues an integrative approach. Together with the Valerian Arsène Verny Foundation at the Palais Mendelssohn in Grunewald it organizes film screenings for 200 viewers to which they invite not only children from welcome classes, but also pupils from regular classes. Since the language selection is difficult – the children come from up to eight different countries – the films are usually shown with German subtitles. “Ultimately, it’s also about the refugee children learning German through the films,” says LIN managing director Birgit Murke.
In order to organize film screenings regularly and at different places, Murke suggests cooperation with schools and is encouraging small Berlin art-house cinemas to open their halls once a month for CINEMANYA matinees. The first to do so was the Bali-Kino in Zehlendorf in late March. It is hoped that many more will soon do the same. 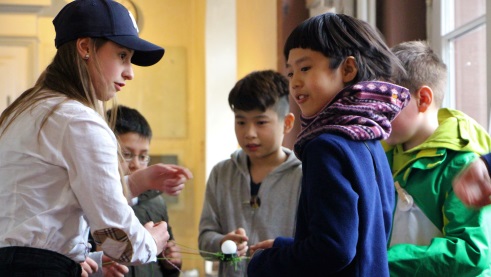 Cinemanya
Films are one way to ease access to a different culture and language. With the CINEMANYA film cases, the Goethe-Institut, in cooperation with the Federal Association for Youth and Film (BJF), provides German films for media education work with refugee children and teens. The cases can be employed via film case sponsors. The film selection was curated by Michael Harbauer, director of the international Schlingel film festival for children and young audiences. In addition to the films, the cases contain a companion book with tips and hints for preparing for and following up on the film presentations.