The Feininger Masters’ House
Crying out for colour

Now, 80 years after their heyday, the rooms of the Lyonel Feininger Master’s House can be admired once again in their original colours. 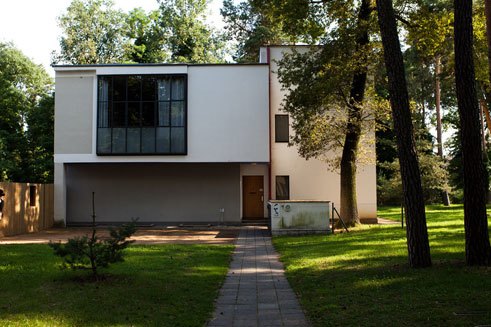 Feininger Masters’ House in Dessau | © Børre Ludvigsen, 2011 The Masters’ Houses, designed for the Bauhaus professors in Dessau-Roßlau by Walter Gropius in 1925, are a unique ensemble listed by the UNESCO as a World Heritage site of special cultural significance. The restoration and refurbishment of these dwellings has been making successful progress since 1990, based on a combined effort with many donations and a strong commitment. In the spring of 2011 a further step towards recreating the original living and working environment of the Bauhaus Masters was accomplished with the recreation of the interior colour scheme in the Lyonel Feininger House. Since the beginning of the nineteen nineties the Feininger Master’s House, that today is just a rudiment, has been occupied by the Kurt Weill Centre. The other part of the semi-detached building was originally home to the artist couple Moholy-Nagy and was destroyed in the second world war.

The painter, graphic artist, caricaturist and musician, Lyonel Feininger moved into this house in 1925 together with his wife, Julia, sons Andreas, Laurence and Theodore Lux. Walter and Ise Gropius were living directly next door in a detached house. Further up the road, towards Schloss Großkühnau, the next dwellings followed at distances of about 20 metres. These included the semi-detached residences for the Bauhaus Masters Georg Muche, Oskar Schlemmer, Wassily Kandinsky and Paul Klee. The artist community did not last long. Six years later all of the Masters’ Houses had to be vacated. With the rise of National Socialism the Nazis closed down the Bauhaus in 1933 and the Bauhaus teachers had to give up their artistic home. Many were forced to emigrate, and the National Socialists vilified many of their works as “degenerate art.”

However, in spite of all the modifications and changes that the buildings were exposed to after 1933, the aura of this ensemble has not been lost.

Right up to the present day their architectural authenticity remains, with its modern clear lines and quality design features. The buildings are designed without any superfluous distractions, drawing the onlookers’ attention through large spacious windows. The houses blend in with the surrounding environment and nature – like allies – circling the Bauhaus ‘mother ship’ like small satellites in the tall pine trees, always friendly always bright, but keeping their distance.

„We are through with Weimar, gentlemen, now it’s time to do Dessau!“

Meisterhaus Feininger Dessau, wall cupboard, Photo: Peter SchöneThe Bauhaus building and its Master’s Houses were commissioned by the municipality of Dessau that was also developer, owner, supervisory authority, employer and landlord. In a letter dated February 20, 1925, Lyonel Feininger writes to his wife: “Meeting at lunchtime today with all Masters, presentation by Kandinsky and Muche on Dessau. A visit by the gentlemen with their wives went extremely well, greatest satisfaction in every aspect. (...) The houses for the Master artists are to be built in the beautiful park according to our individual wishes and plans, completion date is set for October! And with studios built on top of the house. (...) We are through with Weimar, gentlemen, we are now going to do Dessau!“

As if living outdoors 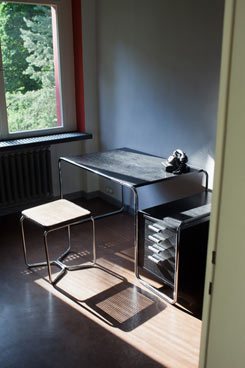 Feininger Masters’ House in Dessau | Photo: © Børre Ludvigsen, 2011 By the end of July 1926 the houses were ready for the Bauhaus Masters to move in. Lyonel Feininger was there too, although he did not have a teaching commitment at Dessau’s Bauhaus. He wrote about the new dwelling in a letter to Julia: “I’m sitting on our terrace that is absolutely delightful. (...) The trees are a real blessing, even in brightest sunlight you can still look out without being dazzled; and the tops of the trees are so beautiful against the sky. There is space here, and it gives you the feeling of being completely outdoors.“

„What do you think about bright red?“

In this letter he euphorically praises the spacious rooms to which the furniture designed by his son Andreas award “so much colour and warmth”. “One can indeed speak of a creative activity, of a new structural work of art.“ He was particularly taken with the staircase, “so much fun, with the red railing on the cobalt blue, smooth stringer.“ He was delighted with the new and open living style and it drove him on further. “We will have to have our wicker furniture painted or I will gladly do it myself. What do you think about bright red?“

A house with 40 colours

The first colour designs were drawn up in the Bauhaus wall painting workshop that was headed by Hinnerk Scheper. As with the other Masters’ Houses each room was dealt with individually, not just with a different colour scheme, but regarding the surface treatment as well. In just a few months the architect Hans-Otto Brambach from Halle an der Saale and the restorer Peter Schön – both commissioned in 1994 with the reconstruction of the building envelope of the Feininger house – managed to restore the initial colour concept of the individual rooms that was present when the house was first moved into. The fire engine red and cobalt blue of the staircase banister winding up to the glazed staircase on the top floor. Red, grey, black with subtle pastel shades for the walls, rich in contrast and exhilarating. 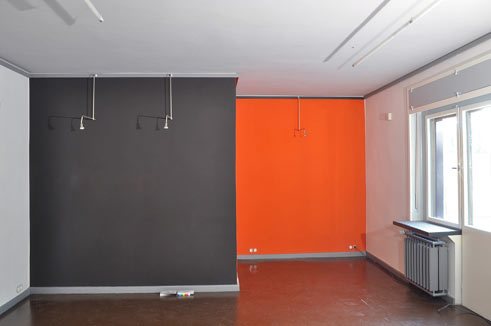 Meisterhaus Feininger Dessau, studio | Photo: Peter Schöne Besides studying the pigmentation and binder composition of the original findings, Peter Schöne also investigated the changing influences coming from light, dust and nicotine. The original doors and door frames have also been preserved, restored and their surfaces cleaned. There were once over 40 different colours used inside the Feininger house, and this composition can now be experienced again thanks to this sensitive and careful restoration. But there is more to come. The Moholy-Nagy Master House, that was destroyed, and also the Walter Gropius House are to be rebuilt and made open to the public by 2013. The Berlin architects Bruno Fioretti Marquez convinced the jury with their “Contemporary implementation of the original ensemble.“

A stroke of luck for all visitors, that will enable them to experience with all their senses the still valid concepts of modern community living and working.