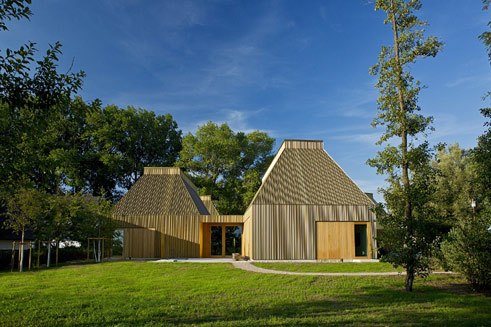 Building art museums has taken over from abbeys and cathedrals as the major architectural undertaking. No other projects allow the architect so much adventurous freedom in their design of form, shape and space. Therefore, for many architects it is indeed a sorry task to have to plan a museum that they cannot triumphantly boast about, that has to blend inconspicuously in the local surroundings using the regional form and style, and still not evoke a feeling of traditional nostalgia.

An artists’ colony in the secluded countryside

The architects Volker Staab Architekten, from Berlin, have magnificently accomplished this task. They won the competition announced by the foundation Kunstmuseum Ahrenshoop. The small and tranquil fishing port on the Fischland-Darss-Zingst peninsular in the Baltic Sea made a name for itself as an artists’ colony. This was in 1898, following the departure of many artists from the hustle and bustle of the big cities at that time to live in a more secluded area where they could still enjoy the company of their contemporaries. The dreamy countryside between the Baltic Sea and the Saaler Bodden was, of course, the subject matter of many of their paintings. 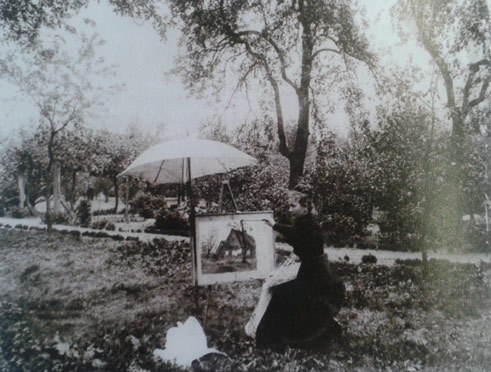 Artists´colony Ahrenshoop, Elisabeth von Eicken, nach 1880 | Photo: Museum of Art Ahrenshoop During the First World War the colonists left, but after it ended new artists, including Alfred Partikel, Theodor Schultze-Jasmer and Hedwig Woermann, were drawn to the fishing village, particularly in the summer months. With the founding of the German Democratic Republic some artists fled to the Fischland peninsular to escape political pressure from the state led cultural scene, and Ahrenshoop became an artists’ colony again. Today it still fosters its tradition and name as a place for inspiring and communicating art, with Open Studio events for tourists as well as scholarships etc.

Between tradition and Modernism 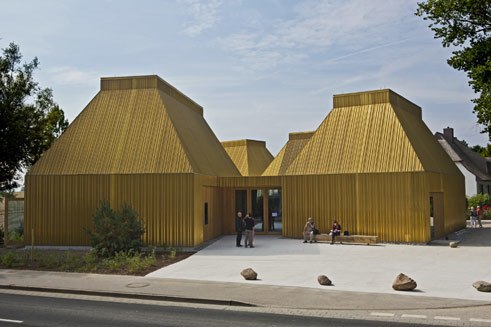 Museum of Art Ahrenshoop | Photo: Voigt & Kranz UG Prerow This communication has now been enhanced through the erection of the new Art Museum. The complex is situated on the edge of the village and gives the impression of being a mere addition to the other village houses. It comprises an ensemble of five buildings that has been built to the scale and in the style of the local surroundings. The houses of approximately the same size are arranged in an irregular order, reminiscent of a farmstead, and are interlinked by a flat tract that accommodates the central foyer. 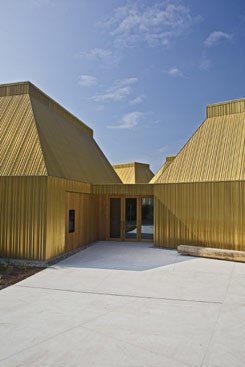 Museum of Art Ahrenshoop | Photo: Voigt & Kranz UG Prerow By cladding the walls and roofs with an envelope of irregularly profiled brass sheets the houses have the traditional thatched look of the cottages found all over the Darss (this being the middle section of the Fischland-Darss-Zingst peninsular). Oxidisation will soon make the shinny-gold brass almost indistinguishable from the thatching of the neighbouring buildings. The houses are built without projections at the eaves and instead of a ridge there is an upturn that holds the skylight, distinguishing the design as a modern artefact that stands out against the traditional fisherman’s houses.

One of the individual units accommodates the administration office and a room for seminars, the other four houses each feature a windowless “white cube” of an agreeable size for large and small picture formats. Daylight is softly dispersed through glass prisms mounted in the skylights. A narrow glass door creates a link to the outside world and simultaneously serves as an escape route. The four smallish exhibition rooms are designed with almost equal proportions and uniform walls, and make life easier for the curators.

A way to enjoy art on vacation 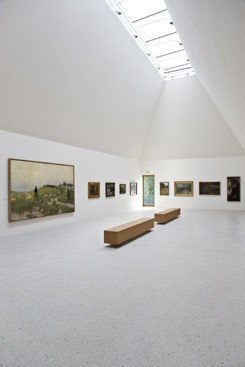 Museum of Art Ahrenshoop | Photo: Voigt & Kranz UG Prerow Visitors to the art museum in Ahrenshoop on the Darss come to look around in a leisurely, holiday mood. They are perhaps just passing by. It may be a dull rainy day and they can simply enjoy the museum in a relaxed atmosphere. Here they will discover an exhibition that is carefully put together, charmingly curated and inspired by genius loci. The opening exhibition “Um uns ist ein Schöpfungstag” (Like a Day of Creation) shows works of art that highlight Ahrenshoop as a home to artists. It also allows one to identify interactions between the founders of the colony, like Paul Müller-Kaempff or Elisabeth von Eicken, and those artists who came to this coastal region as summer guests. Among these were such famous names as Erich Heckel, Alexej von Jawlensky or Lyonel Feininger, and also César Klein and George Grosz, as well as Gerhard Marcks with his sculptures. Also leading artists of the GDR, like Manfred Böttcher and Wolfgang Mattheuer, discovered motifs for their work in Fischland/Darss. 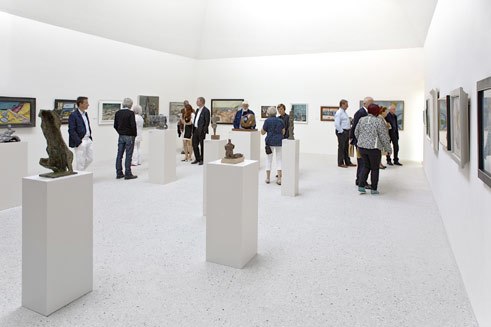 Museum of Art Ahrenshoop | Photo: Voigt & Kranz UG Prerow The new museum on the Darss is not on the scale of an internationally famous or spectacular building with Bilbao Effect - this would not be appropriate in such a setting. The truly positive experience when visiting this museum and its collection is the enjoyment of art in an unhurried fashion and the concept of being able to understand and recreate the way the artists felt in this rather special location. Newspapers and journals were indeed full of praise for the museum, and it is certainly destined to receive a host of architects’ awards.

Falk Jaeger is an expert on historic buildings and critic of architecture in Berlin.