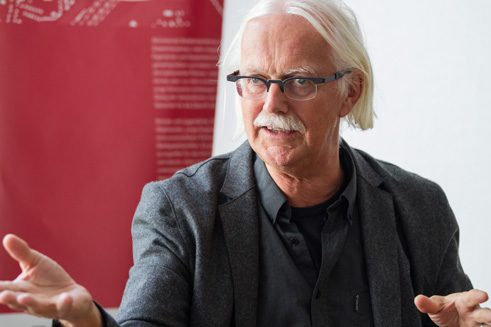 In the 1970’s, resistance to the conversion of city centres began to emerge in major German cities. The first citizens’ initiatives against so called “urban obliteration” (“Kahlschlagsanierung”), of for the most part old, Wilhelminian neighbourhoods took shape. In the place of demolition, demands were made for the preservation of mixed structures in city centre areas and affordable housing. Since the early 1980’s, architect and urban planner Klaus Habermann-Nieße has been committed to social housing policies and community-oriented residential culture.

Mr. Habermann-Nieße, in 1981 almost 200 buildings were intermittently occupied in West Berlin. These hard-won liberated spaces turned into laboratories of an alternative way of community living. But other groups besides radical squatters also emerged from the protest movement which sought to find avenues for legalising communal residential experiments. What was the situation like in Hanover in the early 1980’s, what gave rise to a renaissance of the residential cooperative system precisely here?

Hanover was of course not cut off from the political and social movements of the late 1970’s. As young architects, we were interested in a cautious, circumspect urban rehabilitation instead of demolition, as well as in new residential forms and affordable housing for all. In Hanover, we had the so called “Freies Studium” (i.e. free study) and were encouraged and supported in our critical thinking at the University of Hanover, especially by Gerhart Laage, head of the Department of History and Theory of Architecture. In the early 1980’s, young architects were criticising the City of Hanover and its demolition practice in urban rehabilitation and were given the opportunity to independently modernise some initial buildings in the Ahrbergstrasse in Linden (a district of Hanover) through the architectural firm Agsta. Subsequently, in close consultation with advocacy planner Klaus-Jürgen Holland the first residential cooperative Linden Selbsthilfe was founded in 1983 and which henceforth began to modernise buildings on a self-help basis.

Your goal was circumspect, sensitive urban rehabilitation and affordable housing. What did the composition of the newly-founded cooperative Linden Selbsthilfe and WOGE Nordstadt look like?

In numerous round-table discussions, plans and calculations were made to enable modernisation of the buildings at sustainable rents. The City of Hanover allocated public funds to the architects and the cooperatives supported by them for the modernisation. The lack of equity was made up for through self-help in form of working hours on the part of the future residents.

Being a founder of a cooperative in a self-help project involves a great deal of responsibility. All of a sudden one finds oneself dealing with financial planning, mortgages and statutes, one has to develop business skills, bring together capital and apply for funding. 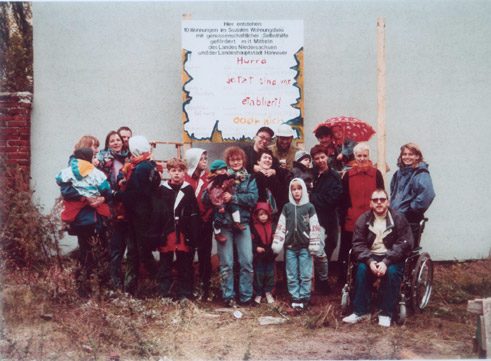 WOGE Nordstadt EG, self-help-group Kniestraße 12 in Hanover in front of their construction sign | Photo: Klaus Habermann-Nieße Responsibility? That’s for sure – back then we always said that we laid claim to the public funding that other applicants also received. For us, it was important to prove that we could succeed in setting up a residential project with unpaid, volunteer self-help and thereby generate something jointly. At the incorporation meeting, for instance in the case of WOGE Nordstadt, 60 sustaining members came together who were each willing to purchase a cooperative share of 1000 DM. We had a lot of support from policy-makers and also from many neighbourhood residents who did not want to live in the cooperative themselves, but thought it was a good idea. In any event, the support provided by the model of the advocacy planner – who accompanied and advanced the communicative aspects of the processes - was very helpful. After the incorporation meeting, it took a while until the first modernisation objects were made available. Then the financing was negotiated and the residential group project was put together in the cooperative. We architects took on executive board tasks on the one hand and residential group advising on the other, which kept both us as volunteer board members and the commissioned architects busy well into the evenings.

This form of an committed architecture is very reminiscent of the values that the generation of young architects in the 1920’s associated with their professional ethics and sense of their calling. Do you see them as forerunners?

The idea that architecture is more than designing and building houses has very much guided us. We wished to enhance the profession with new contents. Honest participation, new residential forms for alternative lifestyles, environmental aspects, self-determination within the community, including socially marginalised people as well, move our work as architects and city planners to this day. In 1988 we founded the WOGE Nordstadt eG and landed in the midst of the conflict over the occupation of the Sprengel grounds. We spoke a great deal with the occupiers and mediated in the conflict between the city and groups of occupiers. Parallel to this, with the assistance of the AWO (Arbeiterwohlfahrt /Workers’ Welfare Association), we developed the project “Jugendwohnen im Stadtteil” (i.e. neighbourhood housing for young people), mini-flats for young people who drop out of families or the residential project in the Warstrasse with drug addicts who also had to contribute 10 percent of the financing costs through self-help. That wasn’t always so simple, but it was successful. Today, the WOGE Nordstadt has 250 flats, many of which have occupancy rights from the City of Hanover, among them are many tenants who were once initial occupiers of the Sprengel grounds, and today have stayed on and are living in the neighbourhood with their children.

Today, after 30 years, do you still see a need for the concept of cooperative planning and living?

Yes, absolutely. Perhaps I might even say more than ever. The network of advisory facilities for group living projects has expanded in Germany. Today, these projects and joint building ventures characterise a segment of the housing market and the architecture industry. The privatization strategies that began on the German housing market in the mid-1980’s have become far more comprehensive. Affordable housing is becoming increasingly scarce, especially in cities. The supply of residential space has long since ceased to fulfill the needs and wishes of many people. Multi-generational residential forms are in demand, in other words, residential projects for young and old (together instead of lonely) and self-help projects for communal residential and living arrangements in the heart of the city. I see a great willingness on the part of many people to conceive of housing both as a cooperative organisational task as well as in terms of its social and political responsibility. Particularly in cooperatives, people learn to practice democracy on a small scale. With the cooperatives, housing is freed from the dynamics of capital markets and thus acquires a meaning that we need for a functioning society.

Together with Diplom-Ingenieur Brigitte Nieße, architect Klaus Habermann-Nieße directs the architectural firm Plan Zwei in Hanover. He is chairman of the cooperative WOGE Nordstadt, founded in 1989, and managing director of the IWS (Institut für Wohnpolitik und Stadtökologie e.V. /i.e. institute of housing policy and urban ecology). Between 1996 and 1998, on behalf of the cities and local housing enterprises the IWS actively advanced the incorporation of two cooperatives in large-scale residential areas in Kiel–Mettenhof, and in Hanover–Vahrenheide.

Ute Maasberg hold this conversation. She is curator and publicist and lives in Hannover.