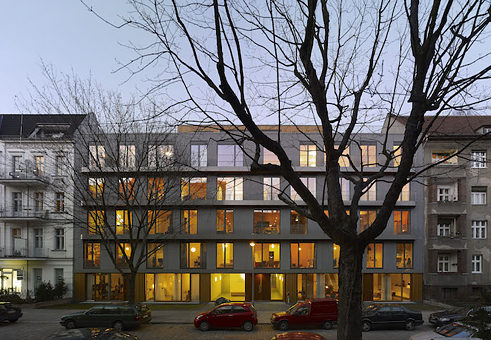 The image of wood as a building material is changing rapidly. In the past, “wood” as a keyword called forth associations with mountain cabins and field barns, flimsily walled emergency barracks and simple American housing estate homes. Today timber construction has gained in solidity and precision, and adopted more contemporary forms both technically and in terms of design.

On the one hand, it comes down to the ecological advantages of wood as a building material: it is greatly appreciated as a resource-friendly, renewable raw material, as a CO2-depot and – in the interests of global climate – on account of its low need for “grey energy” for production and transport. On the other hand, construction timber’s admirable qualities are drawing more and more attention: it is far lighter than steel but has the same load-bearing capacity. It has almost the same compressive strength of concrete but can absorb tensile forces that with concrete would require steel reinforcement. It is insulating,  pleasant, warm to the touch and possesses perceptible, haptic qualities. 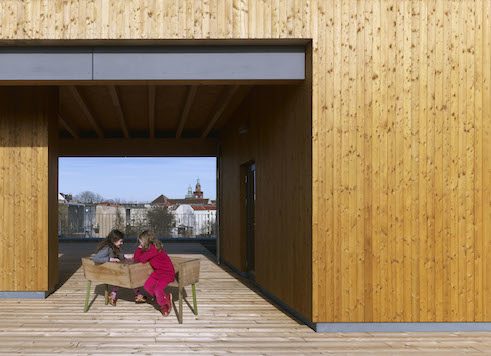 Project 3xgrün in Berlin-Pankow | IfuH Institut für urbanen Holzbau with atelier pk, roedig.schop architekten, rozynski_sturm architekten | Photo: Stefan Müller If only it didn’t have this problematic feature: wood burns. But wood still does have plus-points with respect to steel reinforcement. Steel requires expensive protection from fire impact, since it softens and loses its load-bearing capacity. By contrast, a wood beam at first burns only superficially, the remaining cross-section lasts long enough to rescue all endangered persons. If one intends to promote timber construction, one must take account of its qualities in new fire-safety technology and guidelines. 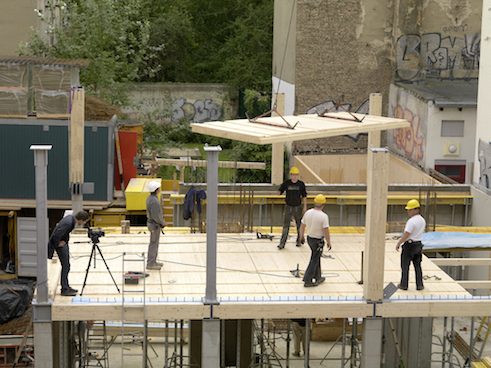 Residential building E3 in Berlin | Kaden Klingbeil Architekten | Photo: Bernd Borchardt This applies most of all to multi-storey buildings such as are usual in city centres. Crowded cities of half-timbered houses were the norm in the Middle Ages and the Renaissance. And practically every city chronicle tells of devastating fires in entire neighbourhoods. Only open construction and the altered mode of construction of the houses put an end to the urban conflagrations. But the fear has persisted into the present, and for architects who intend to build timber buildings in city centres dealing with fire safety issues is therefore still the greatest challenge. 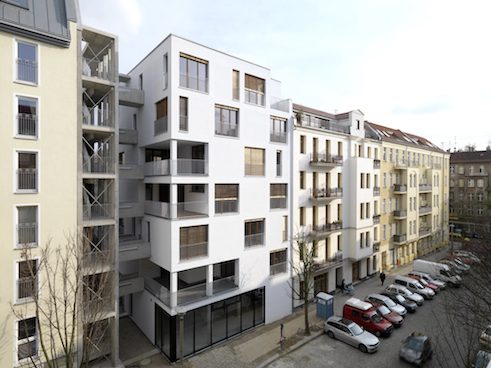 Residential building E3 in Berlin | Kaden Klingbeil Architekten | Photo: Bernd Borchardt Berlin is pioneering in timber construction, where numerous six- or seven-storey buildings have arisen in gaps between buildings in Wilhelminian neighbourhoods. At first, the authorities emphasised extreme fire-safety measures, which as late as 2008 resulted in solutions as in Esmarchstraße 3 (Kaden Klingbeil Architekten), where a concrete stairwell was separated from the building proper by concrete bridges. Since then, the dangers have been specified more precisely and regulations correspondingly refined. Timber buildings are now considered to be completely compatible with city-centre conditions, and with their panel and glass facades no longer recognisable as such, as in the case of the residential building 3xgrün in Berlin-Pankow (ArGe IfuH i.e. Institut für urbanen Holzbau, Atelier PK, roedig.schop Architekten and Rozynski-Sturm Architekten). 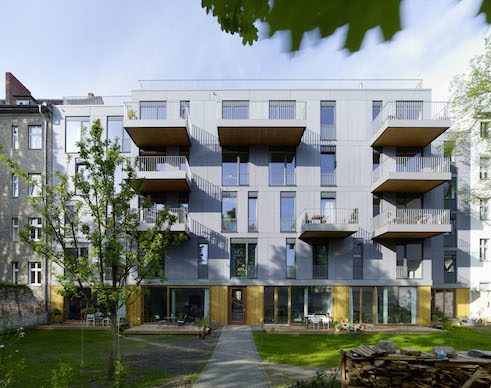 Project 3xgrün in Berlin-Pankow | IfuH Institut für urbanen Holzbau with atelier pk, roedig.schop architekten, rozynski_sturm architekten | Photo: Stefan Müller In any case, the cellar and often the ground floor as well are built in massive construction fashion, as in any steel or concrete-skeleton building, stairwells are executed as structurally bracing concrete cores and at the same time as protected emergency exits. For the supporting skeleton, but also for ceilings, partitioning walls and exterior walls, increasingly sophisticated timber construction systems are being developed. Completely prefabricated with high precision at the factory, they can be set up and assembled on site in a few days. Trades such as plasterers, painters and floor layers are often not needed, which speeds up, simplifies and reduces costs of construction even more. Nonetheless, monotony and design clichés are not an issue here, individual floor plans, diversified facade composition and case-specific solutions present no difficulties in view of the computerised method of production. 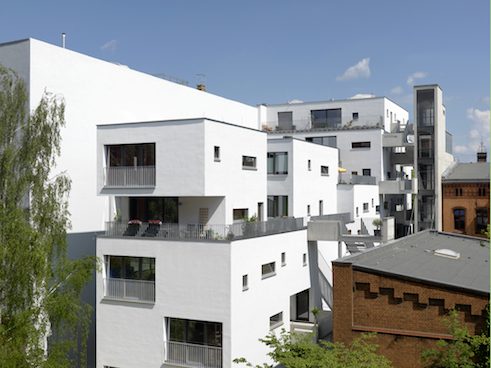 Residential building C13 in Berlin | Kaden Klingbeil Architekten | Photo: Bernd Borchardt At this moment, high-rises with nine or more storeys are being planned for a number of locations. Far more would be possible, since wood is an intelligent building material. If one construction element fails, others take up the weight, as is known about centuries-old half-timbered houses. Bearing capacity and resilience are therefore never an issue with this construction, but simply compliance with existing fire-safety regulations. Engineers’ associations, the construction industry, the DIN standards committee and legislators are at work to bring timber construction into line with the standards that have been achieved. 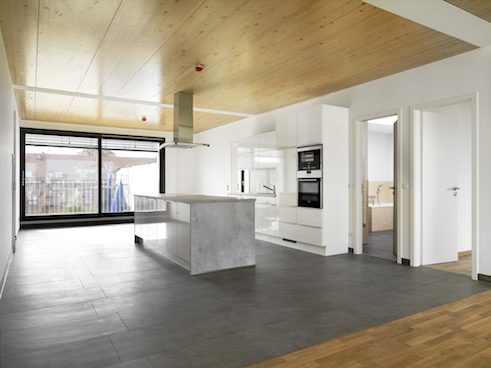 Residential building C13 in Berlin | Kaden Klingbeil Architekten | Photo: Bernd Borchardt In addition, timber construction has considerable potential in the area of urgently needed urban densification. For the most part, older buildings are structurally able to bear one or two additional storeys of light timber construction. Here to, the following applies: contemporary timber construction is the order of the day, not only in exurban areas, but in city centres as well.