An Interview with Frank Simon-Ritz
For a National Digitalization Strategy

“Germany needs a national digitalization strategy”, urges the German Library Association. Its chairman, Dr. Frank Simon-Ritz, explains why this is so.

Mr Simon-Ritz, in March 2011 the German Library Association (Dbv) already submitted a position paper entitled “Germany needs a national digitalization strategy”. In the latest report on the situation of libraries from autumn 2013, you repeat your demand. Why?

A cultural nation such as Germany needs a strategy that states the priority and division of labour with which so important a task as the digitalization of cultural assets is to be carried out. After all, this is about the long-term securing of cultural treasures and, at the same time, making them freely available. For Germany especially such a strategy is essential. 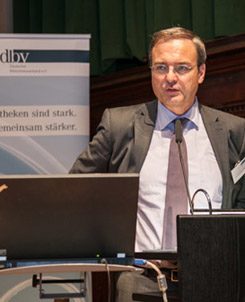 Dr. Frank Simon-Ritz, chairman of the German Library Association (Dbv) | © Dbv, JFMüller Because of their completely different national history, comparable countries – for instance, France and Great Britain – have national libraries that have been collecting the cultural heritage of these countries since the advent of book culture. The German National Library has been doing this only since 1912. That means that the older book holdings in Germany are distributed over a number of libraries. These include the large state libraries in Munich, Berlin, Dresden, Göttingen and Hamburg, but also hundreds of smaller libraries. They all must work together to be able to provide a representative presentation of the German cultural heritage in the German Digital Library and then in the Europeana. And this requires coordination and strategic decisions.

German libraries have been digitalizing their holdings for twenty years, mainly with project funding from the German Research Foundation. Why is your demand now so urgent?

The last two decades have been mainly devoted to the retrodigitalization of incunabula and works up to the seventeenth century. This is a comparatively manageable stock. Now libraries are facing a very different task in the digitalization of books, magazines and newspapers from the eighteenth to the twentieth century – if only in terms of the sheer mass. We’re going to have think of something.

What then should be structured and regulated?

A national strategy, which incidentally also affects not only libraries but all cultural heritage institutions, including archives and museums, must first draw up a list of tasks. Then it should determine who undertakes which tasks. Another objective would be to agree on mandatory standards pertaining to the quality of digital copies and their indexing.

Is digitalization then now being conducted haphazardly?

No, we have structures and institutions that compensate the deficits as much as possible. For one, there is the DFG. For another, the competence network based at the German Digital Library tries to plan and coordinate the operation. But I’d like to see a stouter effort.

At the end of March 2014 the full version of the German Digital Library has been presented – though its funding is ensured only until the end of 2015.

Yes, cultural policy at the federal and state levels must do something to ensure the successful future of the German Digital Library. The DDB has established the basic infrastructure of a central national platform. Now the project needs to be provided with a permanent structure. For this, money will be constantly needed. And precisely in connection with the previously mentioned mass digitalization of works of the eighteenth to twentieth century, the DDB will need, in addition to the DFG funding, further financial efforts.

One of the demands of your 2011 position paper has in the meantime been satisfied: there is now a legal framework for the digitalization of orphan works and works out of print.

Yes, this law has reopened a time window for digitalization: book publications up to 1965.

Does this give you hope that your demand for a national strategy will also soon be met?

I’m really rather confident that the discussion on the content and on the question of appropriate committees and participative structures will get started. Policy decisions have repeatedly confirmed that our demands are reasonable. Frankly, I didn’t expect in 2011 that the problem of “orphaned works” would be solved so swiftly.

The interview was conducted by Dagmar Giersberg. She is a freelance journalist based in Bonn.