Library Apps
The World of Books in Your Smartphone 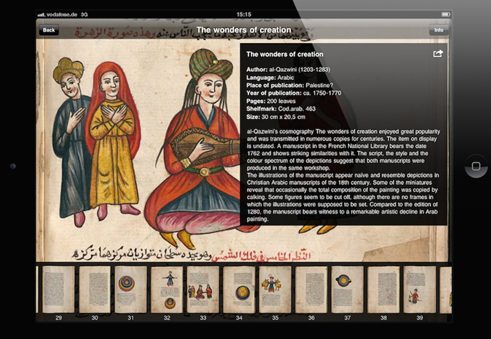 Apps for mobile phones not only open up the stocks of German libraries. For quite some time now the apps available offer much more than a mere presentation of the books they have on their shelves.

A whole library that fits in your pocket. No matter where the users happen to be in the world they can now take out library books via their Smartphones or Tablets. Whether they are into delving into historical maps of Bavaria or browsing through a newspaper archive on the First World War, more and more learning providers are now also discovering the opportunities to be had in the field of mobile applications, apps for short. What the individual institutions have to offer may be very different, but the technological progress being made in the field is coming along in leaps and bounds.

Basically there are three different types of app, explains Julia Bergmann, who as a coach for information literacy, among other things, advises libraries on digital strategies. Firstly there are the Catalogue apps which enable people to access online indexes. Secondly there are what are known as Treasure apps with which libraries provide access to special items they have in their archives, like valuable manuscripts. And finally Augmented Reality apps – these combine information from the real world with online data. This enables, for example, additional information to be displayed via the mobile phone’s camera image – the “layer”.

According to Bergmann there is also a technical difference between web apps and native apps. The latter are downloaded onto a mobile device, do not necessarily require an Internet connection and make use of the functions of a Smartphone or Tablet: compass, GPS, camera, microphone. Almost all library apps can be used with the operating systems of the market leaders Apple (iOS) and Google (Android).

The least sophisticated of all the apps seem to be the Catalogue apps, “They are very often just mobile pages that have been optimised for the end device,” says Bergmann. In many cases academic libraries, as well as public libraries, she went on to say, use the moderately well adapted standard systems of the library providers. The applications, as one might expect, are monotonous. Only a few can be compared to the Catalogue app, for example, of the New York Public Library, which in many respects serves as a role model. The app NYPL mobile has, for example, a barcode scanner with which book shops can verify whether a particular book is to be found among the library’s stocks. Furthermore it enables users to borrow or download electronic content, sends users a message to remind them the return date is due and allows customers’ accounts to be managed.

Although paying fees or charges via an app would not be permissible in Germany, the libraries here in Germany have in fact already successfully adopted some of the other applications. For example, the Sächsische Landesbibliothek – Staats- und Universitätsbibliothek Dresden (The Saxon State Library - Dresden State and University Library) also offers a barcode scanner. And alongside all the research functions the EconBiz app of the Deutschen Zentralbibliothek für Wirtschaftswissenschaften (the German National Library of Economics) in Hamburg and Kiel gives users the opportunity to chat live with an information librarian.

Back in 2010, when the growing success of mobile applications was beginning to be noticed, the Bayerische Staatsbibliothek (Bavarian State Library) was already developing its first app called Famous Books. It provides access to treasures from its digitalised stocks, for example, to such unique items as the Song of the Nibelungs – and has so far racked up about 80,000 downloads. “That is a lot for a cultural app like this,” emphasises the Deputy Director General of the Bavarian State Library, Klaus Ceynowa. A similar app, Oriental Books, containing among other things rare Quranic manuscripts, in contrast fell short of expectations. The lesson that was learned – “The user’s interest should be a key consideration in the development phase,” according to Ceynowa.

The Stiftung Preußischer Kulturbesitz (Prussian Cultural Heritage Foundation) in Berlin also has a treasure app to offer. The app Kulturschätze (i.e., cultural treasures) contains 24 objects  with explanations in the form of images and sound. Among them one can find an autograph of the book Der zerbrochene Krug by Heinrich von Kleist as well as the first German book on chess from 1616.

Digitally tracing the footsteps of the king

In contrast Augmented Reality apps have more to offer than mere artistic presentation. In this field it was once again the Bavarian State Library that was the pioneer. According to Ceynowa, they started to really exploit the interactive possibilities of the new applications. Ludwig II – Auf den Spuren des Märchenkönigs for example is what they call a location-based app that enables information about the king to be accessed at 140 locations in Bavaria and in Europe. Most of the time it is displayed live on the Smartphone’s camera image. The app Bayern in historischen Karten (Bavaria in Historical Maps) provides the possibility by means of geo–referencing to view one’s present location in one of over 250 maps from the 16th to 19th centuries. And bavarikon3D shows art treasures from Bavarian cultural institutions in the form of 3-D digital copies that can be zoomed in on, rotated and turned round.

A lot of attention has also been attracted by the Weltbrand 1914 app by the Hamburg University Library. The app enables users to gain insights into the outbreak and duration of the First World War with the help of headlines from various Hamburg news sources of that time. Julia Bergmann is convinced that Augmented Reality apps “have so much potential for the libraries of the future.” Although there is not much to be earned with apps – they are almost always programmed by external companies – they do an awful lot for one’s image. Apps, emphasises Klaus Ceynowa, “present libraries in a new dimension as a modern educational provider.”