New challenges
“How Do We Present Ourselves, what Do We Post as a Library?”

Goethe.de talked to Kirsten Marschall, in charge of quality assurance at Bücherhallen Hamburg (Hamburg’s central library), about the latest trends and future developments in libraries.

Ms Marschall, the motto of the Librarians Conference 2014 was “We open up worlds”. What were the main topics and issues discussed at the conference?

Libraries, whether research or public libraries, are becoming increasingly important. At the same time, digitization poses new challenges to libraries in terms of their responsibilities and how they are perceived. That was a central focus of the conference. How can we maintain and augment our informational competence in cyberspace? And how is the library changing as a concrete venue? The motto We open up worlds was referring to that, too. Nowadays I receive information from Papua New Guinea just as fast I can retrieve a book from the stacks.

What are the various tasks involved in the digitization of public and research libraries?

The digitization of research libraries is a matter of securing and permanently preserving knowledge. At public libraries, the thinking is more: do I purchase the medium as a book or straightaway in digital form as an e-book? After all, our budgets are not growing. If I want a big collection of e-media, I have to make cuts elsewhere. We also need communication skills here. Some users wrongly fear they won’t be able to use public libraries anymore without an e-reader, because the libraries will only be procuring digital media from now on. That’s not going to happen.

Are users also involved in the digitization process?

Digitization equipment is becoming more and more user-friendly. Many public libraries have scanners on which users can scan media they’ve brought with them, such as their grandfather’s war diary, for example. However, digitization entails a number of unresolved legal issues, mostly regarding copyright and licensing. It’s important that policymakers realize that e-media and printed media are of equal importance to libraries. In Bremen, the mayor Jens Böhrnsen was ready to listen to the “Bremen Appeal” along those lines (Editor's note: In their opening statement on the German Librarians' Day, the librarians called for up-to-date kowledge transfer.).

Are there new models for making digital collections visible in physical facilities?

One idea that is gaining traction is to use QR codes on the shelves to link directly to e-books. The point is to be able to borrow the book immediately in the virtual library via the link. But we’re only just getting started in this domain. What’s important is that we reach new users, who may still have the outmoded image of dusty libraries in mind, through social networks and other virtual realms and provide good services there.

Is a web presence now standard for public libraries?

More and more public libraries have established positions for social media managers. At the Bibliothekartag in 2011 in Berlin, we were still wondering: do libraries need Facebook? The question today is: how do we present ourselves, what do we post? That has to be done professionally. A boring web presence will get us nowhere.

Is the role of public libraries as modern educators changing as well? 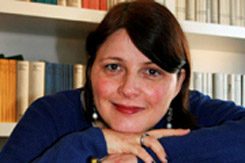 Kirsten Marschall | © Kirsten Marschall We’re pioneers in that regard. In Hamburg, for example, we teach kindergartens and primary schools how to integrate a tablet meaningfully into a storytelling session. One novelty in Bremen was storybook apps, mobile applications for classics like “The Very Hungry Caterpillar”. This is a trend that’s going to be important in early child education. The idea is not to put a group of kids in front of a tablet all by themselves. But the very diversity of languages offered opens up new interactive possibilities. You can select the language of your choice instead of having to purchase the whole book in Turkish, Greek or Italian. So this is convenient for kindergartens and primary schools, which, fortunately, are becoming more and more multicultural.

If you had asked me five years ago about management strategies for libraries, I’d have replied: first we’ve still got to thrash out how the word “management” relates to libraries. Now we have managerial accounting and innovation management. In most libraries, the commercial director has studied business management or economics; we librarians no longer delude ourselves into believing we can handle everything ourselves. We bring specialists into the libraries.

Spaces for the future

What strategies exist to give users a say in library collections?

Library catalogues are increasingly enriched with elements that users are familiar with from Amazon, for instance. That means indications as to which additional media might interest users. The graphic getup with book covers, which was practically non-existent until a few years ago. Or the possibility of leaving comments about specific media. Libraries have come to realize they need to reach and involve the user with his or her knowledge.

As the bottom line from Bremen: which issues will be important for the future?

Issues of copyright, licensing, and the equality of e-media for libraries still need to be resolved. The question of whether public libraries should be open on Sundays was at least touched on in Bremen (Editor's note: In Germany businesses are generally closed on Sundays and legal holidays, but exceptions are possible.). Here, too, the legal uncertainties ought to be cleared up as soon as possible. And space is becoming an important issue, meaning not only interior design, but also library buildings. In Berlin, residents decided in a referendum against locating the regional library in Tempelhofer Feld. A brave decision. But the next question now has to be: where can the library – or sensible additions to the existing facilities – be built?

Patrick Wildermann conducted this interview. He a freelance cultural journalist based in Berlin.