ZBW
“We have to explain what we have to offer” 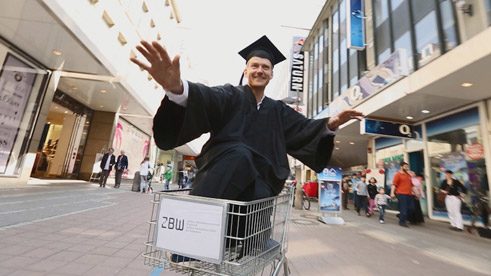 Advertising campaign of the ZBW | © ZBW

The German National Library of Economics (Deutsche Zentralbibliothek für Wirtschaftswissenschaften /ZBW)-Leibniz Information Centre for Economics with locations in Kiel and Hamburg is the largest specialized library of its kind in Germany. Since 2013, it has been advertising its online service with an innovative campaign. An interview with its Head of Marketing and Public Relations, Doreen Siegfried.

Mrs Siegfried, why does the ZBW need an image campaign?

We regularly analyze how we are perceived by our potential target group in economics as a relevant facility. This serves to find out whether we have to adjust our image in public relations. In the 2013 image measurement, we found out that the ZBW was definitely ascribed qualities such as “competent” and “reliable”. But we also had to note that the ZBW was perceived primarily as a library with a physical inventory. Few users knew of our online service. This is a problem other libraries also report – for example, at the Librarian’s Day. For us, it was an incentive to say: Then we just have to explain more comprehensively what we have to offer.

How exactly do you do this? 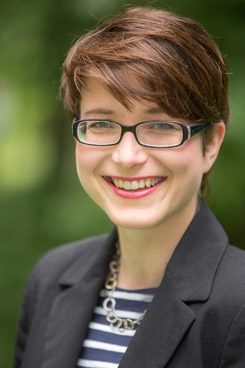 Dr. Doreen Siegfried, Head of Marketing & Public Relations, ZBW | © ZBW In the summer of 2013 I developed a concept that is geared to four years, up to 2017. Four phases are planned that will bring the strengths of the ZBW step for step into public awareness. At the beginning, it’s about communicating our core business: we offer specialized literature for everyone free, also online. For example, it’s important for our users to be able to download PDFs quickly and easily. Through the ZBW they have free access to full texts from more than 800 specialist journals.

The slogan of the campaign is “See more. Understand more. Find everything.” Did you look for an advertising agency as a partner?

No. There was an extensive brainstorming session within our own PR team. Out of it came the idea for a poster design that played with economics curves in everyday life. For example: “Do you see the supply and demand curves everywhere?” And a picture of two crossed dog leashes. Or: “Do you see the product life-cycle everywhere?” This was symbolized by a flock of birds flying in parabolic form. And for the general campaign we came up with the slogan: “See more. Understand more. Find everything”. Of course we engaged a professional photographer for the pictures.

What measures comprise the first phase?

In the first step we prepared posters, flyers, postcards, bookmarks and stickers. They were then sent to our users throughout Germany: scientists, libraries, student associations and research institutes. And we produced a video. I developed the script together with an agency. The idea was that it should be emotional, not too dry. We wanted the film to communicate that the ZBW helps people to work efficiently, quickly and successfully. Even under the most difficult conditions. That’s why in the clip you see a sleepy father sitting before a computer with two small children on his lap. We mentioned the film both in our newsletter and via social media.

How do you otherwise use the internet for your campaign?

Our website www.alles-finden-zbw.eu, where all the relevant information has again been packed together, played a major role from the start. We bring this medium up to date daily. We’ve put successive testimonials on the page. That is, prominent figures in economics explaining what they personally value about the ZBW.

What does the continuation of the campaign look like?

The last component of the first phase is the so-called road show. We plan to visit ten places of study for economics all over Germany. At each place we’ll have a booth, offer a seminar and dates on which we’ll go to the local libraries. All under the motto: We can do our core business. Subsequently the communication of content from the first phase will be continued. But in addition we’ll broach the topics of Open Access and Open Research Data. With this we want to achieve a second “aha” moment among economists.

What is the goal of the second phase?

Users should become acquainted with our skills in research data management. We’ve taken this up in a number of cooperative projects. We can offer advice on key questions – for example, What is the legal situation? Or what are the expectations of third-party funding? How do I get access to research data? The communication goal of phase two is to show that a scientific information facility in 2015 can do more than merely provide PDFs. We’ll also shoot a clip in which our staff presents the library. We want to give the campaign a face; it should be authentic.

As good as that sounds – doesn’t the future of libraries seem pessimistic when even an institution such as the ZBW can no longer reach users without launching an elaborate campaign?

Because of digitalization, the library scene and the work routines of scientists are changing. We find ourselves in the midst of a paradigm change away from the possession of information and to access to information. But the fact is that this process is still ongoing. We can help shape it in this transitional phase and show the relevance that libraries have to it. In a few years perhaps we’ll no longer have to explain the basics of our services, and will have only to point to our latest ones.

Patrick Wildermann is a freelance journalist based in Berlin.