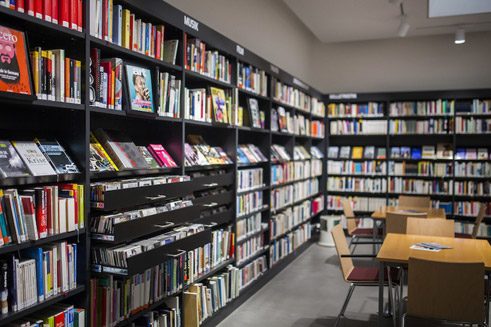 How can you get the maximum out of a minimum of space? An interview with Jana Binder, the head of the Goethe-Institut in Bratislava, about the modernisation of the library at her institute.

Ms Binder, how did the idea of giving the rooms of the Library at the Goethe-Institut Bratislava a general overhaul come about?

The library still had the basic furnishings it was fitted with 25 years ago and it was really showing its age. The room was not inviting, it was also poorly insulated, no atmosphere at all. For a small,100-square-metre library like ours spatial quality plays a particularly important role. It was also our aim to address new groups of users. To do this you have to provide a place where people want to spend time. These days libraries are no longer just places for keeping books in, they are more centres of learning and exchange where, in the best case scenario, people are confronted with a whole range of surprising services and information.

How did you tackle this redesigning of the library?

The first thing we did was to reduce the size of our inventory – from 17,000 physical media units to 9,000. We removed every book that had not been taken out over the last ten years. This reduction then enabled us to remove some bookshelves and rearrange the ones left around the walls. In this way we were able to create a free space in the middle of the room – a space where all kinds of new activities can now take place. We disbanded an office and tore down a few walls in order to create a new reception area with a café. It has WiFi and a good cup of coffee – it is a place that also attracts people who are not yet customers of ours.

Did you have any role models in mind when you were planning the whole thing? 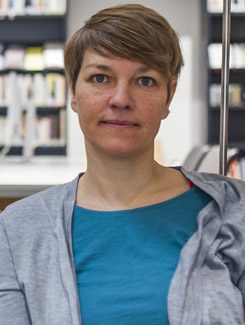 Dr. Jana Binder, head of the Goethe-Institut in Bratislava | © Michal Hustaty No, we organised a brainstorming session with specialists from Germany, among them the architectural firm of Stankovic. It was clear that a good deal of know-how would be required for this kind of modernisation. The architects, for example, invented some special revolving shelves for us, bookshelves that can be opened like a secret door. When you pass through it, you end up in a kind of salon whose walls are covered with books and whose ceiling has a skylight to let the daylight shine in. We also had some special tables made especially to our requirements. They are fitted with sockets for laptops, and they are on wheels so that they can be easily moved around to form new desk and seating combinations, by one person, if necessary. After all our staff is not that big.

What users are you now hoping to address?

We are focusing basically on four target groups: students of German language and literature, teachers and lecturers. Adult learners of German. Children who are learning German at school as a foreign language. And representatives from the publishing world. Our aim is to win them over actively by organising certain events. We now have a presentation screen and a permanently installed data projector, the library is used for press conferences – recently we held one for the presentation of a theatre festival. If you are not afraid of experimenting, chain reactions start radiating in all directions. We serve as contact people for the journalists, supplying them, for example, with background information on a German play that is being performed. In this way we, even as a small library, are able to make a name for ourselves.

To what extent is the library used as a place of learning?

In lots of ways. On the one hand by schools and kindergartens. We also organise in-service training courses for teachers of German, for which we provide the relevant literature for the subject of the course. We have established cooperation projects with different universities, for example, with the Film and Theatre Academy Bratislava that is located not far from the Goethe-Institut. The students soon realise that we have a large stock of DVDs, and also quite a lot of theatre productions on film and specialist magazines like Theater heute. This is possibly a first step towards getting them interested in learning German.

Did you have any new ideas when it came to the way you wanted to present what you have to offer?

Before we modernised, our digital products like our range of e–books were simply not visible in the room. In my opinion we still, in fact, have not found any solutions that are the last word on the subject. I have no faith in QR codes. Nevertheless we now have digital picture frames that present our inventory. Furthermore we have e-readers with German classics stored on them. I-pods with the Goethe-Institut’s Spotify account on them so that people can listen to current play lists of German pop music. Then we have i-pads with all kinds of apps for learning German downloaded on them – apps that we think are of a particularly good quality. Furthermore with our graphic novels we have adopted a more targeted approach towards addressing those users who only have a beginner’s grasp of German.

What feedback have you already had about the new library?

The test phase for the new library, after half a year of modernisation, actually ended just now, but so far the reactions have been mainly positive. There does, however, seem to be a gap between the generations. Up to the modernisation the library was mostly used by senior citizens, the generation in fact that grew up in Bratislava when it was known as Pressburg, speaking the three languages that were used at that time and who still want to practise their German a little. A lot of these people are not so enthusiastic about the whole thing. In contrast the reactions of our younger customers are all the more positive. They above all like the relaxed atmosphere that does not remind them of a typical library.

Patrick Wildermann conducted the interview. He works as a free-lance cultural journalist in Berlin.