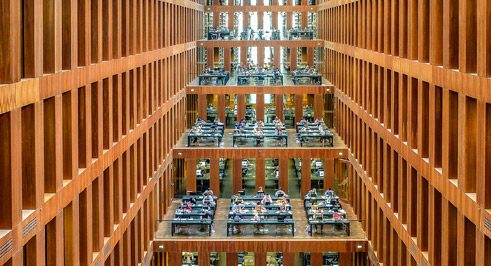 The reading room in the library of the Humboldt University in Berlin | Photo (detail): © K.H.Reichert, Humboldt Bibliothek, via flickr.com, Licenced CC BY 2.0

The days when libraries were just purchasers and keepers of publications have long since gone. Above all the research libraries themselves are becoming more and more active in the field of publishing. The way has been paved for this by the ongoing process of digitalisation that has opened up new vistas for the publishers.

The library publishing sector in the Anglo-American sphere can look back over a tradition that has developed over a long period of time. We only have to think of such well known examples as the special editions of institutions like the universities Oxford and Cambridge. In comparison, there has never been anything similar to that in Germany, library publications in Germany were mostly limited to so-called grey literature – to books and publications that are not sold in book shops, but published in the Deutsche Nationalbibliografie (German National Bibliography) and kept in German libraries.

“In the meantime, however, the role libraries play has changed,” asserts Regine Schmolling. “They are no longer merely purchasers of publications, with all the know-how they have they are involved in many of the stages of the publishing process.” Ms Schmolling is Head of the Cultural Science Department at the University of Bremen, furthermore she is Secretary of the Standing Committee on “Acquisition and Portfolio Development” at the International Federation of Library Associations and Institutions (IFLA). In August 2015 the IFLA World Library and Information Congress took place in Cape Town and the topic of Libraries as Publishers was on the agenda.

A new conception of what a publisher is

When we think about the activity of publishing we do not think first and foremost of the traditional distribution and sale of monographs. Although the research libraries, as well as the public ones, every now and then do in fact still publish a commemorative volume or an anniversary publication, even in the form of an e-book, it is still a niche market. “The concept of publishing these days has to be extended,” says Ms Schmolling. As an example she gives doctoral theses that are posted in digital form on a document server by university libraries and made accessible. “In this case the publishing activity takes the form of the faculty evaluating a document. The library performs the task of the publisher by storing the works on a long term basis.”

It is the same with the scientific journals market – libraries as publishers are playing an increasingly important role there, too. It was the so-called Serials Crisis at the end of the 1990s that triggered this development. Certain monopoly-status publishing houses raised the subscription prices for their publications to such an extent that many libraries could no longer afford them. This, in turn, led to the universities and their libraries publishing their own journals online. Of course, not all of them could compete with the renowned specialist organs, but a publication like German Medical Science, for example, – published by 140 medical associations and accessible at Cologne’s Central Library – did in fact manage to gain a foothold on the market. “When libraries create a research environment in collaboration with universities, they have a future as a publisher,” states Ms Schmolling convincingly.

A further field is the digitalisation of old stock that is, in many cases, carried out by the national libraries. “The publishing activity in this case takes the form of selecting works that are worthy of being digitalised,” explains Schmolling. “It is like a digitalised reissuing of a critical edition.” One example she names is the digitalisation of the Guttenberg Bible in Göttingen. Another would be the works of the King of Prussia Frederick II at the University of Trier.

Works from the available old stock are processed and put in relation with each other. With the help of the new tools of the digital world links and references are added. “We are in an era ,” emphasises Ms Schmolling, “in which the paper document has become just one of many other variants.” She went on to say that even the development of apps could be considered in the broadest possible sense as a publishing activity. In this connection the Bavarian National Library, among others, is developing apps on the basis of digital content.

Ms Schmolling cites primary data documentation as the most recent example of the paradigm shift in the library publishing sector. This involves research data that formed the basis of publications being stored on the servers of the libraries, so that others can access the data. “This is where the libraries can make use of their experience in the standardisation and classification of content,” says Ms Schmolling. “We collect the content and make it accessible.”

For libraries financed with public funding the models mentioned so far do not serve as profit-oriented business strategies. What is more important in this case is open access, the free availability of content, although it does in fact happen that tried and tested models from publishing houses and other companies are occasionally adopted.

Ms Schmolling is critical of the activities of the American Google group, which has concluded contracts with institutions all over the world on the digitalisation of theirs stocks. “It remains unclear just what Google’s profit-maximising considerations might be in its efforts to make our cultural heritage available to everybody,” says Schmolling. “It is against this backdrop in particular that libraries are called upon to ask themselves, “What role do we want to play in the electronic publishing process? Should we leave it to others – or should we actively get involved?”

Patrick Wildermann works as a free-lance cultural journalist in Berlin.