Bavaria isn’t the only place in Germany with mountains. Achim Bogdahn has been to the highest peaks of each of the German states, always with a celebrity in town. 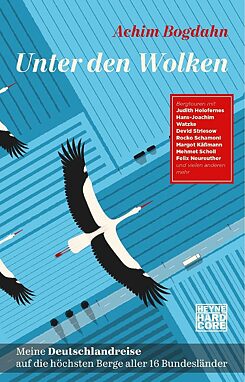 © Wilhelm Heyne Verlag Germany’s mountains! Everyone knows the Zugspitze, some might have heard of the Feldberg or the Brocken, but then? Radio presenter Achim Bogdahn has climbed the highest mountains in the 16 German states and written a book about it. Well, climbed is a bit of an exaggeration in some cases. Each time he was accompanied by a famous public figure.

Bogdahn has worked for Bayerischer Rundfunk since 1991 and presents, among other programmes, the youth and pop culture magazine Zündfunk and the radio talk show Eins zu Eins. The Talk. He got to know some of his fellow travellers during his many years as a presenter. Bogdahn is a big football fan. His stage name “Sechzig” – after the old club 1860 Munich – is even on his identity card. So, it’s not surprising that he chose Borussia Dortmund’s managing director Hans-Joachim Watzke to hike with him up North Rhine-Westphalia’s highest mountain, the Langenberg in the Sauerland. He climbed the Feldberg (Baden-Württemberg) with his former radio buddy and ex-Bayern München pro Mehmet Scholl.

Even a mountain of rubbish is higher

The book is named Unter den Wolken (Below the Clouds), alluding to Reinhard May’s evergreen Über den Wolken. And the title fits, because he doesn’t often get very high. As Bogdahn candidly admits in the preface, some of the 16 mountains “don’t deserve to be called mountains.” In the city-state of Bremen, he and his companion Henning Scherf, Bremen’s mayor from 1995 to 2005, had to search a long time for the highest mountain in the smallest federal state. The hill in Friedehorstpark is only 32.5 metres high. Nearly 70 buildings and even a mountain of rubbish in Bremen are higher.

Hiking isn’t the focus for Bogdahn. It’s not about alpine feats, even if he experiences “the longest hike in the world in the worst rain in the world at the loneliest lake in the world” with Manuel Andrack in Saarland on the way to the Dollberg. No, he’s more a follower of the age-old motto “the journey is the destination.” In addition to conversations with his companions, the journey to each mountain is also an essential part of each of the 20-page chapters. They usually take Deutsche Bahn, of which Bogdahn also admits to being a fan. Of course, things don’t always go smoothly, as evidenced by their welcome to the Harz mountains: “Dear passengers, this train will be stopping indefinitely. There are cows on the line to Goslar.”

The book is also interspersed with plenty of anecdotes and sometimes entertaining, sometimes useless trivia. Travelling and digressing are united. Bogdahn has mastered the art of free association and also doesn’t shy away from corny jokes. His comment while passing through a Thuringian winter sports resort: “Zella-Mehlis, that sounded like an eastern cure for cellulite.”

The good-humoured radio presenter’s 16 essays are a pleasure to read. Even in the most adverse weather and other conditions, they radiate something fundamentally altruistic. It’s a great book to ward off any tendency towards melancholy, which is widespread in Germany not only during the darker time of the year.