New audio books
Acoustic journey into the past

In uncertain times, it sometimes helps to look back. Occupying oneself with the classics and stories from the past can help us to regain firmer ground underfoot. New audio books serve this need, while filling many gaps in one’s knowledge at the same time. 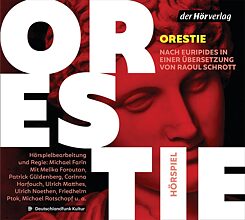 © Der Hörverlag “Revenge, greed and power“ make for many personal and political conflicts today, and that goes for past times too. Writer and comparatist Raoul Schrott, who has made a name for himself by translating ancient texts into contemporary German, has crafted a new audio drama version of Euripides’ Oresteia. According to Wikipedia, this ancient tragic trilogy about the matricidal Orestes and his sister Electra has been dubbed a “gangster drama” and “thriller” for its gripping, drastic plot. Be that as it may, the cast is impressive, featuring actors Corinna Harfouch, Ulrich Matthes and Ulrich Noethen. The combination of famous participants and the “modernised text and sound collage” helped to put this audio book at the top of hr2’s best audio books list in May 2022. 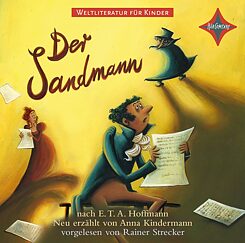 © Hörcompany There is no doubt that E.T.A. Hoffmann’s Der Sandmann (The Sandman) is horror classic. It tells the story of the fate of Nathanael, a students tortured by traumatic childhood memories, who ultimately goes mad. This story cemented Hoffmann‘s literary reputation as the founder of black Romanticism. Anna Kindermann has succeeded in adapting the narrative, which deals with the uncanny and the abysses of the human psyche, making it suitable for children, while retaining the author’s typical tone. Rainer Strecker, actor and audio book narrator, “precisely sounds out the tense moments and dramatic climaxes“. In June 2022, this combination took him to the top of the hr2 list of best audio books for children and young adults. 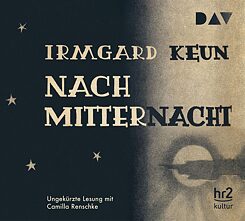 © Der Audio Verlag In the early 1930s, two books about the lives of young women during the Weimar Republic unconditionally seeking independence and happiness brought Berlin-born author Irmgard Keun overnight fame: Gilgi, eine von uns (Gilgi, One of Us, 1931) and Das kunstseidene Mädchen (The Artificial Silk Girl, 1932). Immediately after the Nazi takeover in Germany, books by this author, whom Alfred Döblin had encouraged to write, were confiscated and banned. Irmgard Keun went into exile in 1936, first to Belgium and later to the Netherlands. And she continued to write, for example the novel Nach Mitternacht (After Midnight), in which in 1936, 19-year-old Sanna faces the choice between submission to dictatorship or emigration. “Anyone who wants to know how life changed under National Socialism, how people became fervent jingoists, should listen to the unabridged reading of this novel, published in exile in 1937“ (second place in the hr2 list of best audio books in July 2022). Actress Camilla Renschke is impressive in this audio book production, not only as a reader, but also for the songs. 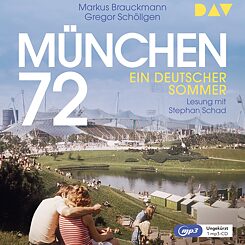 © Der Audio Verlag 2022 was the year of in-depth retrospectives on the 1972 Munich Olympic Games. What was planned to be an upbeat sporting festival under carefree summer conditions turned into a bloody massacre when a Palestinian terrorist group took the Israeli team hostage and murdered them. Author and director Markus Brauckmann and historian Gregor Schöllgen bring a German summer to life in their texts, read by actor and audio book speaker Stephan Schad. In München 72. Ein deutscher Sommer (Munich 72. A German Summer), they paint a multi-faceted, fact-filled contemporary picture of reality in the Federal Republic of Germany of the seventies. 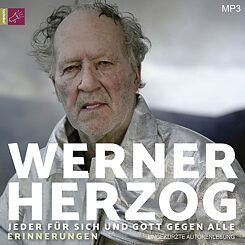 © tacheles! On 5 September 2022, Werner Herzog celebrated his 80th birthday. Born in Munich, he is a leading representative of international film d’auteur and New German Film, and most certainly an exceptional personality, not only with regard to the film genre. In Jeder für sich und Gott gegen alle (Every Man for Himself and God Against All) he presents his own eventful life – “very personally, in his unmistakable Bavarian lilt “. He unfurls a life story rich in drama, characterised by unforgettable films such as, Fitzcarraldo and Grizzly Man, to name just a couple. “He gave himself and us a wonderful birthday present“, opined the audio book jury at Hessischer Rundfunk, putting this author’s reading to the top of its list of best audio books in October 2022.