The Staatsbibliothek in Berlin
“I became a ferocious reader”

A form of life, a kind of labyrinth: Harald S. at the Berlin Staatsbibliothek | Photo (detail): © Susanne Gupta

While studying humanities at university, Harald S. strayed into the Berlin Staatsbibliothek (National Library) in Potsdamer Platz in 1985 – a wrong turn with consequences. Since then, he has been happily burrowing there into the recondite and exploring the useless.

In the mid-eighties I strolled in here for the first time. The library was emptier; many students came here to study only during exams. About then I began working on my doctoral dissertation; the library furnished a good framework for discipline. Getting in was easy: there was no turnstile, no IDs, no fees. You could simply walk in and use the reading room and reference library. It was only years later that I had a library ID. At the beginning of the nineties, after the opening of the Wall, people were already clustering at the entrance in the morning. There was a big race for a working place. Now it’s more relaxed again. 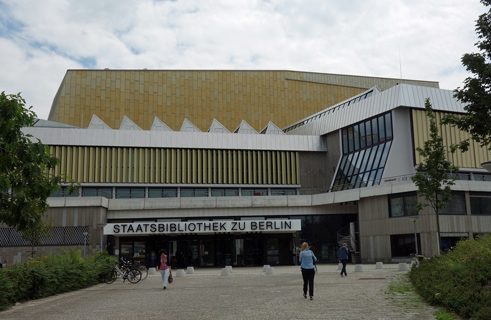 Main entrance of the Berlin Staatsbibliothek in Potsdamer Straße 33. | Photo (detail): © Susanne Gupta I spend three or four days a week here, without fixed plans, just following my own rhythm: fetching ordered books from the shelf, looking for a place to work. I’m someone who prefers paper and pencil; I like to sit in the small laptop-free area, surrounded mainly by law students and their big red, bound tomes. Then I unpack my manuscripts and lay out my books. I use the computer to read e-mails and newspaper. So it goes until, slowly, I start writing. 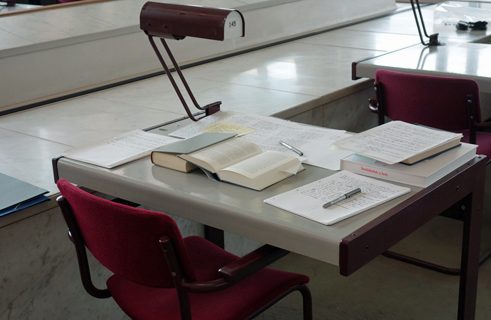 A quiet place: Harald S.’s workplace | Photo (detail): © Susanne Gupta For me this isn’t a place to accomplish specific tasks. For me, a notorious library user, this is a form of life, a kind of labyrinth. Even after thirty-two years I can’t get out of here. The library is an archive containing many books and other writings; here I can just drift or go off on unforeseen turns. That’s the charm of the place. It can happen that I meander through a footnote or let myself be seduced by a reference and take out a book. Imagination, dreams – that’s important; less the historical significance of the location. 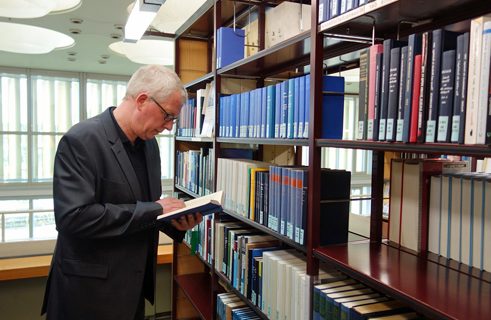 In the reference library for sociology | Photo (detail): © Susanne Gupta One of my hobbies is Chinese literati painting; here I’ve struck a bonanza and buried myself in their treatises. “Literati”, “erudition” – that sounds histrionic. For me it’s not an end in itself; it’s rather about letting myself be stimulated by questions and nourishing my curiosity.

I’m not a homebody. Flats don't interest me; my own consists of book shelves and a bed. Ideal for me would be to live in a hotel room. But that’s not possible. Here I have the literature I need, although I’ve discovered gaps. You always have that problem. But I don’t fret about reading all the millions of volumes. 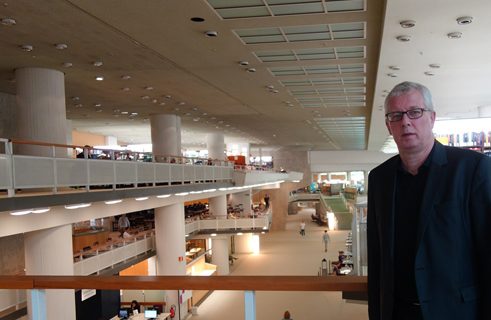 The gallery of the Staatsbibliothek | Photo (detail): © Susanne Gupta Digitalization confronts us today with decisions in the library: I prefer the book, but I can also use electronic media. Perhaps it’s a question of age who reads Plato’s Republic or Hegel’s Phenomenology on a screen.
I’m someone who doesn’t necessarily open a book at the beginning but perhaps instead at the end to look at the notes and bibliography. I prize the sense of touch and the appearance of font types; a screen is for me something very flat. It offers no resistance, no roughness, no folds and creases that set thought into motion. 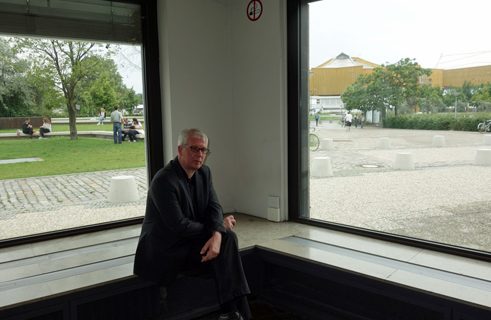 Basement window with a view of the Kulturforum; in the background, the Berlin Philharmonic | Photo (detail): © Susanne Gupta

Harald S., born in 1959, fled the sticks to the “Walled City” to study various subjects in the humanities at the Freie Universität Berlin. He works as a journalist and lecturer at various universities.
The Staatsbibliothek in Berlin – Prussian Cultural Heritage Foundation is the largest comprehensive academic libraries in Germany. Its main holdings include about eleven million books, numerous special collections, literary estates and autographs. It has two locations with different focuses: one on the boulevard Unter den Linden in Berlin-Mitte and the other next to the Kulturforum in Potsdamer Straße in Berlin-Tiergarten, a building constructed in 1978 following the designs of the architect Hans Scharoun.

What makes a library a favourite spot? Users tell us in the series "My Library".