Ghaith standing before the Giesing Public Library, which was reopened in 2016. | Photo (detail): © Andrea Gehwolf

The eighteen-year-old Syrian Ghaith A. has been living in Munich since 2016. In the meantime, he has become a regular at the Public Library in Giesing. He had never before been in a library.

I came to Germany with my older brother in 2015. We had already left my home town of Damascus in Syria when I was thirteen years old. First we were in Turkey and worked there. Now we live in Munich. It’s very important to me to improve my German quickly. That’s why I come at least once a week to the library to study and do my homework. Here it’s so quiet. At my housing it’s usually rather loud. I can’t concentrate as well there. 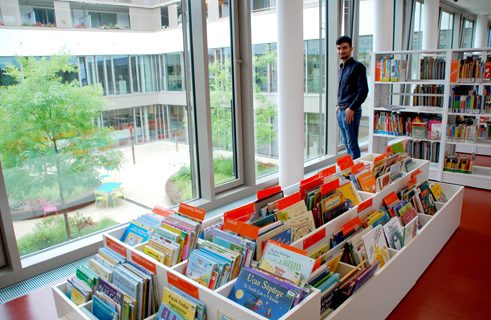 Ghaith likes the quiet of the Giesing Public Library. | Photo (detail): © Andrea Gehwolf Since I turned eighteen, I’ve been living in a partly supervised social facility of the Workers’ Welfare. Downstairs is a senior citizens’ home; I live upstairs with other young people in a two-bed room, as in a flat share. A few days a week supervisors come by and look after us when we need help. I read in the library, but seldom borrow books. But I often borrow movies, action movies and sometimes children’s movies. 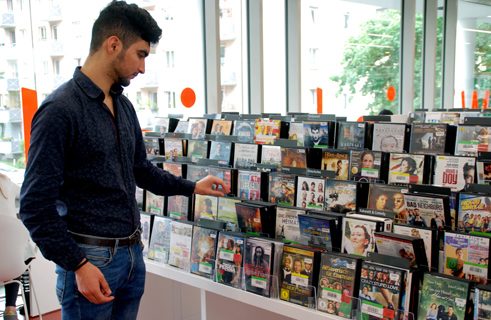 Ghaith watches movies in German on his laptop at home. | Photo (detail): © Andrea Gehwolf I had never before been in a library. On my first visit, I thought you could talk quite normally there. But everything has to be very quiet. At first I was a bit louder than I should have been. But now I find it good that everything is so quiet. A friend of mine didn’t understand at all how a library works. He borrowed a lot of movies and didn’t realize that he had to return them. He thought he was allowed to keep them. Then he had to pay a heavy fine. 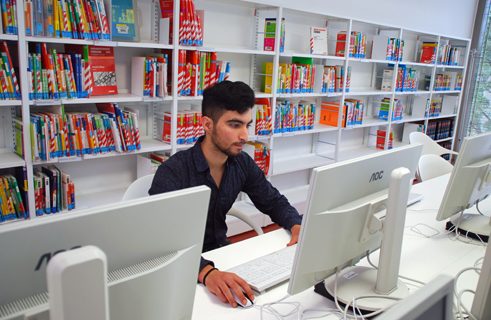 Ghaith doesn’t usually use the computers in the library. | Photo (detail): © Andrea Gehwolf I almost always read children’s books. It’s the best way to learn German. The stories aren’t so complicated and the sentences are simple. Pictures books are too childish for me. Though the books for early readers are quite good, they’re a bit boring. But at least I understand them. I once tried to read a book by the Syrian writer Rafik Schami in German. Unfortunately, it was too difficult. Probably I’ll have to wait another year before I’m up to it. 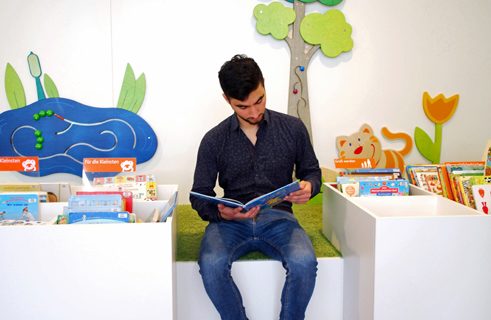 Books for early readers are easy to understand. | Photo (detail): © Andrea Gehwolf I’m attending a job integration class to complete my secondary school education. Then I’d like to find an apprenticeship as a goldsmith. My father and my uncle were goldsmiths, and I’ve already done such work in Turkey. Being a flight attendant would also be nice, but for that I’d need a high-school diploma. So learning German is very important for me and books are a help. 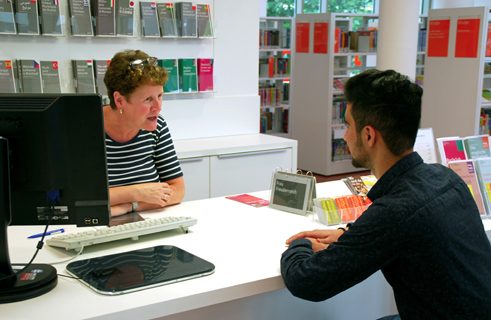 Ghaith A. (born in 1999) has lived in Germany since 2015. He regularly uses the Munich City Library for learning German. Sometimes he goes to the large library at the Gasteig, but mainly he visits the district library in Giesing.
The City Library of Munich is the largest municipal library system in Germany. It includes the large public library Am Gasteig, 21 district libraries, 5 book buses, 7 hospital libraries and the Medienmobil for people with a handicap. The new premises of the Giesing Public Library were opened in April 2016. All Munich public libraries offer an extensive programme for refugees: they can use all media on site without registration. If they want to borrow media, they can apply for a free library card. In addition to free events, some libraries in the system offer regularly supervised learning meetings.

Andrea Gehwolf works as a free editor and author for print and online.

What makes a library a favourite spot? Users tell us in the series "My Library".