Contemporary literature as a window on France – Christian P. with the award-winning novel by Leïla Slimani | Photo (detail): Marguerite Seidel

A small piece of France in the middle of Hamburg - German born Christian P. regularly visits the Médiathèque of the Institut français and not only finds books there, but also a chance to keep in touch with his neighbouring country.

By the time I was a teenager, I had already fallen in love with France and the French language. I took part in an educational exchange with a school in France and we also had a very dedicated French teacher, who sometimes invited us to his home to listen to Jacques Brel. After graduating from high school and doing a traineeship in the hotel management sector, I immediately went to France and lived on the Côte d'Azur for three years. Today I work in the food wholesale business and workwise I unfortunately have hardly anything to do with France. Nevertheless, in order to practise the language, I began to read in French. It was, however, not till some time later, after taking a few language exams and conversation classes at the Institut français, that I discovered the Médiathèque in the basement. 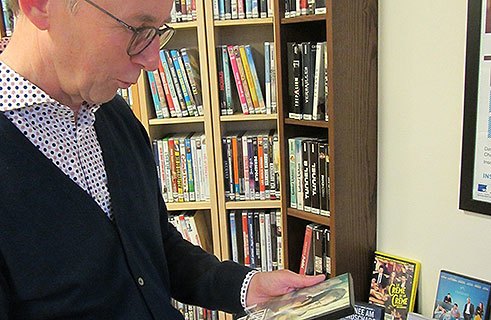 Browsing through the DVD section | Photo (detail): Marguerite Seidel The rooms are not big, but there is a huge selection of French-language literature, from the classics to new publications. German bookstores or the municipal libraries, on the other hand, have hardly any books in the original French in their program and that means I rarely find what I'm looking for. For example, I always like to read the winners of the Prix Goncourt, one of the most important French literary prizes. In the Médiathèque in Hamburg, these award winning books, as well as any other books that are currently shaping the French literary scene, are, in general, readily available. 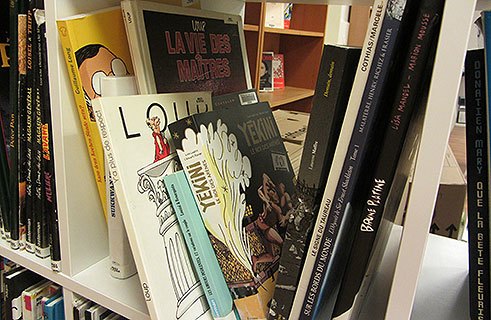 France has a lively comic and graphic novel scene and this, too, is to be found in the Médiathèque. | Photo (detail): Marguerite Seidel On the movie shelves, too, or on the “BD” racks, as comics are called in French, I always discover something interesting. For example, the TV series Baron Noir which is a kind of French House of Cards and, at least, as good. If it had not been recommended to me by the librarian, I would never have been able to watch it. Sometimes I also take out a “BD” or a teen book for my godchild because she has just started to learn French at school. 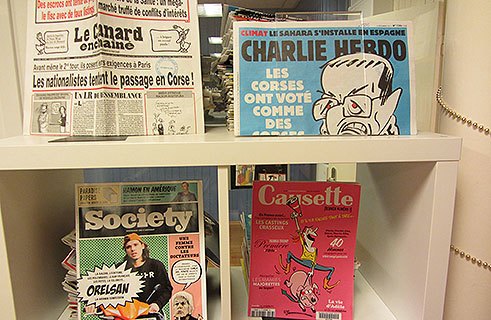 The selection of newspapers and magazines | Photo (detail): Marguerite Seidel What I like about libraries is the idea of sharing. Books have to be circulated. In my family, we borrow books from each other and then talk about them. At the Médiathèque it is the same. I get some tips and ideas about what to read via the language paper Revue de la presse or from other newspapers and magazines. It is, however, the personal exchange of ideas with the Médiathèque’s staff or other users that is equally as important. This means I read books that I might otherwise have put back on the shelf, for example, novels by Guillaume Musso. And I get to know French people and speak French. The Médiathèque is French territory in the middle of Hamburg. 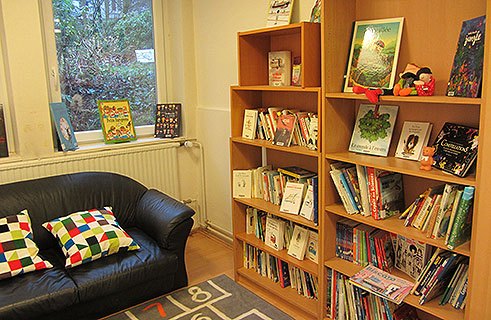 The cosiest place is the children’s reading corner. | Photo (detail): Marguerite Seidel The Institut français also regularly invites French authors to hold readings from their works. They also sign the Médiathèque ‘s copy of the book they are reading from on that occasion. For a passionate reader like me, borrowing a book with a dedication from the author really is something very special. A few months ago, the winner of the 2016 Prix Goncourt, Leïla Slimani, was in Hamburg, presenting her novel Chanson Douce (i.e., Sweet Song). 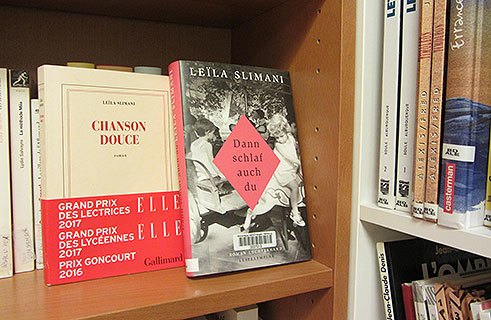 Prominently placed: the novels of Leïla Slimani | Photo (detail): Marguerite Seidel Recently I started to read the book and while I was reading it Leïla Slimani was appointed by the French President as an ambassador for the French language and culture. For me, such little coincidences mean that I can establish contacts and gain access to present-day life in France. That is why I wish that more Germans were aware of the existence of the Médiathèque and would use it to get more in touch with our neighbouring country, its language and culture 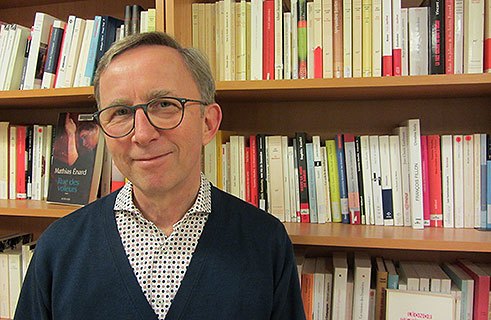 Christian P. (born 1961) is a native of Hamburg and works in the food wholesale business. The French language and culture, as well as the Franco-German friendship, are matters that are close to his heart.
The Médiathèque of the Institut français (IF) in Hamburg has been in existence since the IF was opened in 1951. Today, it has around 5,000 media items for lending, above all novels, comics, graphic novels, children's and youth literature and DVDs. It also provides media for learning the French language. Events for children are held there regularly. There is also a record collection with Francophone music. Users can also access the broad range of multimedia products in the Culturethèque, the digital media library of the IF with around 70,000 available items.

Marguerite Seidel has both German and French nationality and lives in Hamburg, working as a teacher of German as a foreign/second language and as a film journalist.