Instituto Cervantes in Frankfurt
“Inspiration around the Spanish language”

Mercedes P. from Bilbao is studying for her exam as a teacher for Spanish, DaF (German as a foreign language) and DaZ (German as a second language). The necessary leisure and more can be found in the Antonio Gamoneda Library in Frankfurt am Main.

I first intended to stay in Germany for just one year – that turned into 20 years. Right now I am in the final phase of my postgraduate studies. My subjects are Spanish as well as German as a foreign and second language. I have to put in a lot of work and when it comes to the right atmosphere for exam preparation, there is no better place in Frankfurt than the Antonio Gamoneda Library of the Instituto Cervantes. I have to say though that I've actually been going to the library since it first opened in October 2009. At that time Antonio Gamoneda, the Spanish poet after whom the library is named, had been invited to hold a reading. 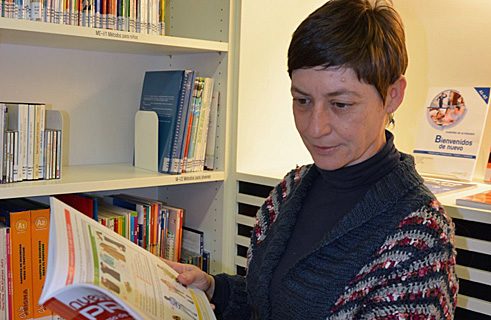 Fascinated by language, history and literature | Photo (detail): © Mercedes Pérez García At the moment I'm mostly there just for an hour or two, because I'm doing a teaching practice in a school and, apart from that, I am attending some seminars. I also go to the library, however, whenever I have a bit of free time. I enjoy being there, because the peace and quiet helps the day to run smoothly and calmly. “Sin prisa pero sin pausa” (No rush, but no break) as we Spaniards like to say.

I have two favourite places in the library – I like to sit at the first table, just opposite Juan Labajos, the librarian. He always gives me a nice smile, and that's so uplifting, especially when I'm tired from all the studying. My second favourite place is in the library entrance area. There are two rocking chairs, where I can relax for a while and let my spirit roam free. In summer, of course, it's beautiful in the garden, but now in winter they are building something there. 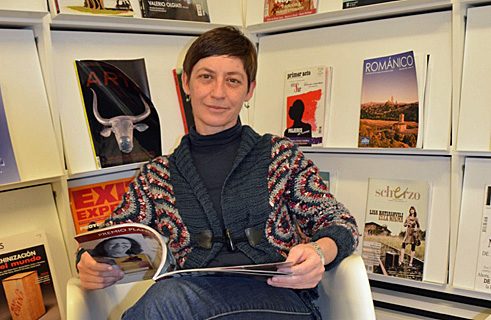 A cosy place for reading – the entrance area with the magazines | Photo (detail): © Mercedes Pérez García The library is spacious, white and due to the large windows also very bright. The colourful book covers add a certain dash of colour. It is accessible for everybody, an inspiring place for people who are interested in Spanish and want to improve their language skills. The “Club de Lectura”, the Reading Club, is also ideal for this – once a month, people meet in the library to talk about a book. 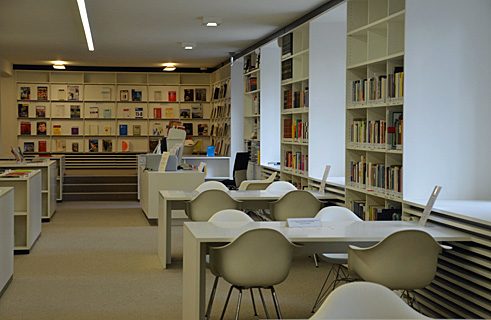 The library's collection of books and media can be used in the reading room by anyone interested. | Photo (detail): © Mercedes Pérez García A small staircase leads from the entrance to the actual reading room. This is also where they keep the didactic and pedagogical literature, which I need for my teaching practice. At the back of the room there is a media library with over 5,000 Spanish and Latin American feature and documentary films as well as music CDs. We can watch these media right there, there are two TVs, players and headphones. 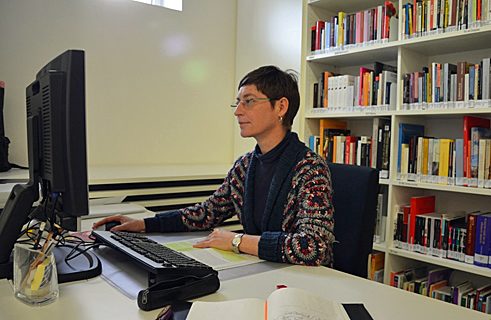 In the library Mercedes finds everything she needs for her work. | Photo (detail): © Mercedes Pérez García In addition to studying for my exam, I also teach Spanish courses at the Instituto Cervantes. In the library I not only find the necessary materials, but also the inspiration for my lessons. Of course, my students also go to the library, and I like to help them find the right books or films. After all, I know what kind of learners they are. For me, going to the library is literally my daily bread.

The only thing I would change are the opening hours. This would enable visitors to use the library who do not have time during the week. It would be great if the library also opened its doors on Saturdays. 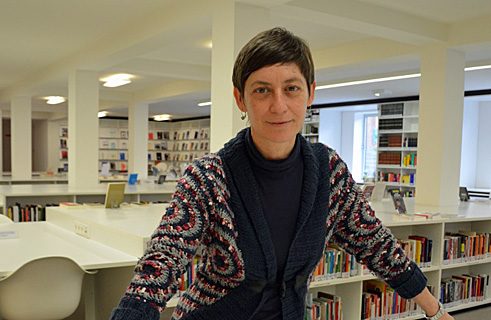 Mercedes has also visited the libraries of the Cervantes Institutes in Berlin, Bremen and Munich. | Foto (Ausschnitt): © Mercedes Pérez García

The Antonio Gamoneda Library of the Instituto Cervantes Frankfurt was opened on 6th October 2009. It specialises in the Spanish language as well as in the Spanish and Hispanic-American cultures. Currently, the library has a stock of about 15,000 media (books, magazines, CDs, DVDs). The focal points of its collection are Spanish and Latin American literature, Spanish as a foreign language, film and music.

Mercedes Pérez García was born in Bilbao, Spain, in 1971 . She is currently taking her second state exams in Spanish and DaF (German as a foreign language) and DaZ (German as a second language) and cannot imagine a better place to study than the Antonio Gamoneda Library.