After his dark hit novel “Der goldene Handschuh” (The Golden Glove) about a real-life Jack-the-Ripper, Heinz Strunk has now published a romance novel. After reading it, though, you may feel glad you’re single. 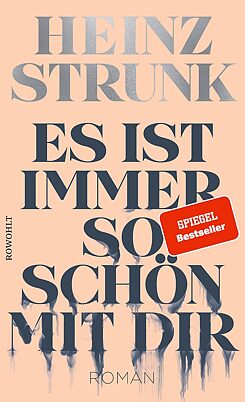 © Rowohlt The unnamed protagonist in Es ist immer so schön mit dir  (i.e. It is always so nice with you) is a typical anti-hero à la Heinz Strunk: in his late 40s and deep in a midlife crisis. His work as a sound engineer irks him, his relationship with Julia bores him. “She sadly no longer sparks any sexual desires in him; there’s something downright sedating about her presence. Maybe she’s secretly putting softeners or soporifics in his drink.”

When he sees the reflection of Julia and himself in a shop window, he’s horrified. “Look at them (us)! Provincials who come crawling out of the nearby exurbs at the weekend, parents whose children have just left home and who can now finally do what they want again, but have forgotten how.”

A new, younger woman arrives just in time. At a launch party he meets the attractive but talentless actress Vanessa. Their first dates cause anything but fireworks. Vanessa invites him to pick her up from a rehearsal. Of course, the rehearsal doesn’t end on time so he has to sit and watch it for a while. What he sees on stage is pure horror for him. “Despair spread through the room like a poisonous fog. No one will survive this opening, that much is clear.” Vanessa’s performance on opening night doesn’t make it any better. “With every minute she is on stage, her radiance fades. Illuminated one minute, extinguished the next.”

At first it looks like the new girlfriend is just stringing him along. She makes him wait, gives him the run-around, makes him dance to her tune. And of course, he always has to pay. Thus the boredom of his former relationship is replaced by self-abasement in the new one. He goes from low energy to sugar daddy, so to speak.

Strunk is merciless not only in his observations of the world, but also of his characters. Humans are revealed in all their wretchedness and corporeality. A rival for Vanessa’s favour is described as “Sucking, smacking and probing, groping, the leopard among the big manufacturers advances inch by inch ... The bald spot on his head glows with desire like a poached egg.”

Master of the short haul

However, Strunk is not always successful in this novel. You can’t quite believe that the main character is so devoted to Vanessa that it leads to a toxic relationship – he’s too critical and distant towards her. The character of Vanessa also remains dim; her attraction is more asserted than convincingly told. The fact that the anorexic young woman also has a history of abuse seems a little too contrived.

Strunk’s strengths are his wordplay and his precise observations of human shortcomings and the contradictions between appearance and reality. All in all, his new novel is entertaining and offers numerous tragicomic scenes and dialogues that prove that Strunk, in any case, is a master of the short haul, of quick and sometimes cheap punchlines and jokes.