Gert Loschütz
NON-EXISTENCE IS THE RULE

Gert Loschütz’s new novel is about the worst train accident Germany ever experienced. It occurred in Genthin in 1939. Based on the tragedy, Loschütz explores various dimensions of human misfortune. 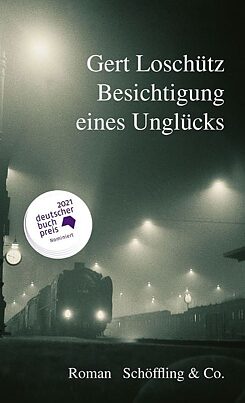 © Schöffling & Co. Genthin is the birthplace of the writer Gert Loschütz, situated between Berlin and Magdeburg. On the night of 22 December 1939, a corridor train crashed into another, quite overcrowded express train at Genthin station. Almost 200 people were killed. In the first chapter of his novel Besichtigung eines Unglücks (Inspection of an Accident), Loschütz retells the story of the accident meticulously and almost like a detective story.

There are several theories as to how the accident could have happened. Had the driver of the oncoming train missed a stop signal? Or had he perhaps passed out due to an atmospheric inversion and the resulting fumes in his locomotive? Both a barrier guard and a line guard in the signal box had tried in vain to prevent the disaster.

Right at the beginning, one suspects that Loschütz will be covering a long period of time as the event is retold by the journalist Thomas Vandersee, who connects it to his own story. In the present-day, the narrator, who grew up without a father, is having a secret affair with a married woman, but one that follows well-rehearsed routines.

The novel consists of three longer chapters, followed by two short, partly fragmentary chapters. After Loschütz carefully traces the accident in the first chapter with the help of court records, newspaper articles and other documents, he tells the story of Carla, classified as “half-Jewish,” in the second chapter. She’s engaged to Richard, a Jew, who is increasingly tormented by ominous thoughts in view of the political situation in Germany, at the latest since the night of the pogroms in November 1938. Carla meets a slightly older Italian businessman named Giuseppe Buonomo, who offers to pass her off as his wife to enable her to escape Nazi Germany. The two are on the ill-fated train, while Richard, already desperate, is feeling conflicted; torn between jealousy and the desire to see his fiancée saved.

In the third chapter, the narrator’s family history is interwoven with the previous plot. At the time of the train accident, Vandersee’s mother Lisa is a dress shop trainee who supplies clothes to Carla, who survives the accident severely injured. We do not learn whether Lisa even acted as a messenger between Carla and Richard. And, of course, Lisa later also has an unhappy love story, a missed opportunity that she will mourn all her life. Another sad subplot is the narrator’s supposed fatherlessness for apparently Vandersee’s father was not killed in the war at all, but is alive and a minor figure from his family’s circle. But both mother and son avoid discussing this delicate subject.

Besichtigung eines Unglücks is brilliant storytelling. The novel captivates the reader with its multi-perspectivity, the skilfully interlinked narrative strands and chronologies, as well as the philosophical thoughts that emerge at the end. The fourth chapter, called “Notebooks,” for example, reflects on the relationship between time, life and death: “Including the realisation that millions of years passed before my birth and millions of years will pass again after my death, … the assumption that being alive is the norm seems like sheer nonsense. It’s the other way round: Not existence, but non-existence is the rule.”