Sven Regener
Rehearsals are for cowards

Sven Regener‘s new novel is a bit like the prequels and sequels to the Star Wars saga – and a bit like James Joyce’s Ulysses. While it lacks a cogent plot, it doesn’t really need one. 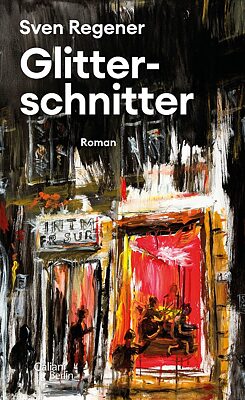 © Galiani Berlin Sven Regener sets his current novel Glitterschnitter in the same cosmos as his successful debut novel Herr Lehmann (2001), once again presenting the world of nineteen-eighties West Berlin Lebenskünstler. The reader becomes immersed in a veritable stream of consciousness laced with the characters’ bouts of logorrhoea.

The central scene of action is Café Einfall, where the other characters usually call Frank Lehmann names like ‘Freddie‘s little brother’, ‘little Lehmann’ or ‘Frankie’, which Frank, struggling to be taken seriously, feels is the worst. Names and diminutives in general are highly problematic – Karl Schmidt, too, will not tolerate being called Charlie. Chrissie’s mother Susi insists on being called Kerstin. And then there is H.R. Ledigt, who definitely does not want to be called Heinz Rüdiger under any circumstances. Funnily enough, the Austrian Kacki from the ArschArt Gallery is the only person who does not have a problem with his name.

If you feel like indulging in nostalgia, Glitterschnitter is just what you are looking for. As you read, you can wistfully look back on the days when everything seemed possible without actually having to get very much done. Maybe life back then was more relaxed. Be that as it may, Regener‘s characters enjoy getting worked up about all sorts of things, particularly all the neighbourhood dimwits and arseholes for whom they ultimately have a soft spot. You just have to get along with them because after all, in a walled-in city, people depend on one another.

There are wonderfully abstruse scenes, such as when Café Einfall one day becomes the smoke-free venue for a group of soon-to-be mums organised by café owner Erwin Kächele’s wife Helga. A smoke-free bar is not only mind-boggling for the barkeeper. All the patrons are also stunned, and the scene ends in tumult. Nobody comes to the café because a throng has gathered around the door. The community police officer even faces the threat of a beating. Frank Lehmann steps in to save the day, hiding him in the cellar.

Cogency is not Regener’s thing. Instead, he gets his readership to let themselves fall into a situation, a time. Among other things, they read about Mr Lehmann’s difficulties in frothing milk for the café au lait so popular in West Berlin at the time. And about Glitterschnitter, the band that gives the book its title, which uses a drill in an attempt to come across as being as subcultural as possible. The band’s motto can more or less be summed up as “Rehearsals are for cowards“. A drum teacher also comes up with a nice aphorism: “When drums speak, worries fall silent.“

BETWEEN GENIUS aND STUPIDITY

As the blurb says, this is definitely a strange world “in a strange city at a strange time“. And nothing really exciting actually happens in the entire novel. To say that in essence, the novel is about the band Glitterschnitter wanting to be invited to a hip music festival and having to organise a concert for it would be missing the point. The plot is clearly a secondary matter. Questions and problems are reflected upon and discussed at great length – and not just once, because no problem is too small not to be viewed several times from every angle. As in real life, there is no clear dividing line between genius and stupidity, philosophy and banter.

Yet it’s a real pleasure to read the numerous characters’ chatter. It whisks you away, even if it doesn’t take you anywhere. Except perhaps to a quaint fantasy world like in a book by Tolkien or J.K. Rowling: “Not necessarily to better worlds, but to worlds that appear to us to be more adventurous, more liveable, less restrictive,“ comments Thomas Winker of DIE ZEIT.