St. Pauli is a myth. This novel by Rocko Schamoni is about Heino Jaeger, an artist whose life story plays out in this demimonde district of Hamburg. 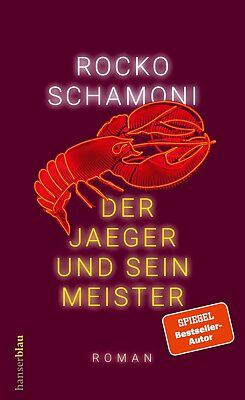 © hanserblau Rocko Schamoni published Große Freiheit (Great Freedom) in 2019, the first part of a planned trilogy of biographical novels about unorthodox characters living on the margins of society in St. Pauli’s red-light milieu. That novel centred on Wolfgang “Wolli” Köhler, an eccentric brothel boss. In Rocko Schamoni’s new novel Der Jaeger und sein Meister (The Hunter and his Master), he tells stories from the life of an almost-forgotten artist and satirist, Heino Jaeger (1938-1997).

Schamoni starts the book with a long and moving prologue, a retrospective view of his father, who is terminally ill with cancer. Like his father, Schamoni also went through depressive phases. In a dialogue with his dead father, Schomoni asks him how he overcame his depression, to which, of course, he can only give himself tentative, questioning answers: “Does the mere fact of ageing allow you to find yourself, because it gradually dawns on you that the wonderful person you see when you look in the mirror every day might really exist?“

Friend of his parents introduced Schamoni to the adult world. He was particularly fascinated by “Freaks. Extraordinary people with the gift of the gab, fantastic show-offs, cocalorums, posers, high rollers.” These freaks became surrogate fathers for Schamoni, whose own father was rather reserved and distanced. Schamoni only noticed the freak Heino Jaeger in 1991 when he got hold of a maxi single and was immediately taken by his bizarre, deadpan humour: “In fact, you could hardly tell whether what Jaeger was presenting was still humour or just a grotesquely overblown picture of reality“. For an example, listen to the sketch Passkontrolle (passport control).

Trust in the world gone pear-shaped

For Schamoni, Jaeger is a real discovery, a “master”. He gets to know his drawings and pictures, too, and buys a few works. A few years later, he meets Wolli Köhler, mentioned above, once a district legend, now adrift and living in a council flat in Hamburg. Schamoni visits Köhler a number of times and listens to his life story. Heino Jaeger was among the visitors to his illustrious salon in the sixties and seventies. Jaeger’s best friend Joska Pintschovius also tells Schamoni about Jaeger’s rise and fall. The novel’s main narrative is interrupted several times by Pintschovius’ accounts.

Together with Pintschovius, a historian, Jaeger worked as a “fragment painter” at the Helms Museum, Hamburg’s archaeology museum. Drawing is Jaeger’s great passion. Wherever he goes, he reaches for pencil and notebook. In a group, he usually just sits quietly, but listens attentively and recalls precisely how people talk and what they talk about. And sometimes, his second talent breaks out - he imitates what he has heard, often reproducing dialogues.

Keen to promote this talent, Pintschovius plays his contacts, opening doors for Jaeger to make test recordings for the WDR. That’s how Jaeger gets to present his impromptu stories on the radio. He makes a name for himself with the radio show Fragen Sie Dr. Jaeger (Ask Dr. Jaeger).

But Jaeger is not made for lasting success, remaining erratic. And ironically, his unreliability is amplified by an alcoholic beverage for which one could not have come up with a better name, the herbal liqueur Jägermeister. Alcohol and other drugs prove to be his downfall. After an LSD trip, something “in his nature had changed, his trust in the world had gone pear-shaped“.

In this episodic novel, Schamoni gets amusingly sidetracked. In some chapters, Heino Jaeger is just a minor character and anecdotes from his environment are told. About Norbert Grupe, for example, a boxer surrounded by scandal. After a disastrous defeat in 1969, he remained silent for minutes on end in a legendary television interview in the sports show Aktuelles Sportstudio with Rainer Günzler, a presenter he hated.

Schamoni’s tribute to Heino Jaeger is both entertaining and sad. While highly gifted, Jaeger was incapable of coping with life and found stability only in drawing: “That’s where he found the security otherwise lacking in his life, in a single vital beam of lead“.

The novel closes with a brief but moving epilogue, another death, this time of Schamoni’s mother, who also died of cancer. Schamoni has not told the saddest part of Jaeger’s biography – that the satirist spent more than ten of the last years of his life in psychiatric hospitals. But perhaps, as hinted at the end of the book, Schamoni will write a sequel. So let’s get ready to roll out the red carpet!