Dita Zipfel
Lucie and the Madness

Lucie, almost thirteen, is annoyed by many things; most of all that she’s expected to vacate her room for mom’s new boyfriend. That’s why she wants to move to Berlin, but it’s expensive. She finds a job – working for a very strange old man. 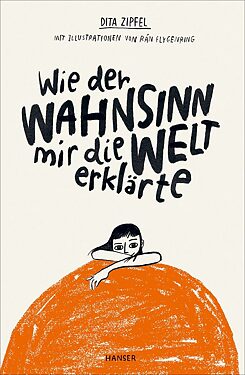 © Hanser Everything was perfect. Lucie, her mom and her little brother Janni lived with mom’s girlfriend Bernie. But then Bernie moves to Berlin and mom’s new friend Michi moves in. He’s the kind of guy who meets “Mom’s criteria to 150%.” Michi comes from a yoga class, he loves “whales that imitate Gregorian monk chants on the pan flute.” He also thinks he’s very empathetic, but proves the opposite to Lucie every day.

For her it’s clear: This won’t do – and she doesn’t want to live here anymore. She decides to earn money because she wants to live with her beloved Bernie in Berlin. This is how Dita Zipfel’s book for young people Wie der Wahnsinn mir die Welt erklärte (How Madness Explained the World to Me) begins.

Lucie discovers a promising job advert: 20 euros an hour for walking a dog. But when she rings the bell of her potential employer, Mr Klinge opens the door, a “barefoot grandpa in an outdoor uniform” who looks very robust. He confronts her with things that are so surprising that she begins to doubt the old man’s sanity.

There’s no dog at all; it’s dead. So he gives her a different job. Now Lucie is expected to write down puzzling recipes for love potions or cakes that make it telepathy possible. Mr Klinge also seems to be suffering from paranoia. In any case, he has difficulty finding words, but he urgently needs to put his recipes on paper. For this, he needs Lucie as his secretary.

At school, Lucie feels like an outsider whom the other, oh so perfect girls make fun of. Then there’s Marvin, the coolest guy in her class. To Lucie’s surprise, Marvin is interested in her – but only so he can betray her. Fortunately, Lucie then meets Leo.

But soon crazy, paranoid Mr Klinge becomes the most important person in Lucie’s life. Thanks to him, she realises that there’s no need to be normal, that you can – and sometimes even have to – break out of reality. For Klinge, raspberries are mermaid brains, tomatoes are dragon hearts and rhubarb is unicorn bones, all of which are ingredients for his magical recipes.

Zipfel’s book is about a lot of things: a teenager’s problems with her single mother, the difficulties in finding one’s way in an adult-dominated world and the question of what is normal and how much imagination this world allows. The likewise very imaginative illustrations by Rán Flygenring not only round off the book, but also enrich the story with new facets.