Michael Stavarič is a master of dystopia. In his latest novel, the earth has perished. Some people have managed to escape by spaceship, but only one of them makes it alive to a frozen planet, where her memories of the Inuit and of Arctic explorer Fridtjof Nansen help her survive. 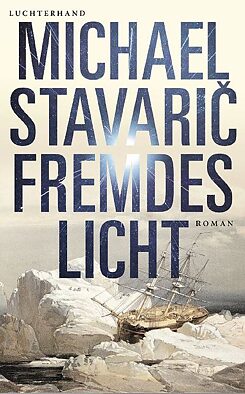 © Luchterhand The plot sounds bizarre – and it is. Like his previous novel, Gotland (2017), Stavarič’s Fremdes Licht (i.e. Strange or Alien Light) is a wild mix of the mythical and the mystical on the fringes – or, in this case, after the destruction – of human civilization. The result is a dystopian science fiction novel with elements of fantasy.

The first part of the book is set in the second half of the 24th century. The first-person narrator, a young woman named Elaine Duval, is stuck on an inhospitable planet. Icy winds, excruciating cold and the desolation of an endless white expanse of ice push her to the breaking point. She is a descendant of an Inuit community, and her grandfather was an unwavering tower of strength in her life. In order to imbue these hostile surroundings with at least a semblance of familiarity, she calls the planet “Winterthur” after the Swiss town in which she last worked as a geneticist.

Lost in space, the narrator feels her sense of time slipping away as well: “I lived in a past that still lay ahead,” she says. This thought harks back to a story her grandfather once told her about the Aymara people and their language, in which the past still lies before you and the future is already behind you. “Weren't these paradigms far more suited to keeping up with the endlessness of the cosmos?” Elaine wonders.

The music of the spheres

And it is precisely in catastrophe that the longing for a fresh start grows; utopia flourishes in dystopia. At present, in these times of the coronavirus pandemic, we can well understand how crisis fuels a desire for utopia. So it is that Elaine imagines that the catastrophe might not have happened at all, that the comet actually raced right past the earth: “I had to admit to myself that I liked this idea of being able to start a new, old life, to look at the earth with different, more knowing eyes, to see it as if it were its (and my) very first day in the universe.” The only thing is: this doesn’t jibe with her reality.

Some passages in the novel recall Stanisław Lem's novel Solaris. There are detailed descriptions of the universe with planets that sound very different. Elaine misses the sound of the earth's rotation: like an “ice storm, a deep humming and whistling”. Venus sounds like a “spherical computer”, a “rotating dead woman”, the sun like “a stentorian booming”, whereas Mars was “one of the quietest planets in our solar system”.

Stavarič adds some humorous touches, too. A childhood friend of Elaine's and later commander of the spaceship she escaped in is named “Dallas”, for instance, after an ancient TV series.

From Arctic winter to the Chicago World’s Fair

The second part of the novel abruptly leaps back from the future to the past, turning this sci-fi dystopia into an historical novel. The story is still told from a first-person point of view, but by an Inuit ancestor of Elaine’s. The year is 1893. Uki is a member of Greenland’s Inuit community. The Norwegian explorer Fridtjof Nansen, who has set out on an Arctic expedition, ends up with his crew amongst Uki's clan in Greenland. Their ship is frozen in the ice and Nansen hopes to learn from the Inuit some vital techniques to survive the Arctic winter. The narrative is regularly interspersed with fictitious entries in Nansen’s diary.

Uki is an unusually bright, inquisitive woman. She becomes friends with Nansen, who calls her “Elaine” because she reminds him of his wife. Uki, in turn, calls him “Birdman” owing to his enthusiasm for ornithology. She wants to see the world. So, after obtaining the shamans’ approval, she leaves with the explorers in the spring. Their destination is the Chicago World’s Fair.

But there she falls into the clutches of a serial killer who terrorized the city during the fair. So the book turns into a crime novel in the end. This concluding episode is based on the true story of Henry Howard Holmes, regarded as America’s first documented serial killer, who tortured and gassed his victims and then dissolved their bodies in acid in his “Murder Castle”, a labyrinthine house of horrors.

Stavarič skilfully navigates these various genres, embarking us on a literary and linguistic adventure that also poses plenty of existential questions. Inuit expressions and traditional lore are shown in the original script, whose mysterious strokes and semicircles have a certain visual poetry about them. Nor do the Inuit expressions lack humour: a madman, for example, is called a “full-blown cold front” in their language.

Knowledge and imagination are the two human faculties that make life worth living – this might be the quintessence of the novel. As Elaine's grandfather says, ”If you’ve lost your imagination” (a word he often uses as synonymous with knowledge) “to name natural phenomena adequately, if you’ve no sense of nuances and the in-between, then you’re really a lost cause.” Uki, ever thirsty for knowledge, concludes that ”the ability to ask questions seemed to me the true source of all human knowledge”.

Stavarič’s novel provides proof positive of his vast knowledge, which, with a hefty helping of imagination, he has turned into a literary masterpiece.