Thomas Böhm/Carsten Pfeiffer (Ed.)
“Do you wear the glasses till you die?”

A Wunderkammer is a cabinet of curiosities, a collection of rarities. Language is a ragbag with plenty of rarities and curiosities too. This new, beautifully designed book presents some remarkable historical as well as contemporary curios of the German language. 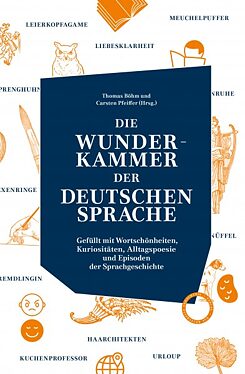 © Das kulturelle Gedächtnis Wunderkammer are a phenomenon that dates from the dawn of the history of museums. These cabinets of curiosities contained all sorts of different objects, everything from art works and precious stones to stuffed animals and outlandish gadgets. In the foreword to Die Wunderkammer der deutschen Sprache, the two editors, Thomas Böhm and Carsten Pfeiffer, write that their treasure chest is “filled with neologisms, curios, the poetry of everyday life and episodes from the history of language”.

For example, if you wished to be well versed in court etiquette back in the day, you had to know whom to address as “Allerdurchlauchtigster” (His Most Serene of All Highness), merely as “Durchlauchtigster” (His Most Serene Highness) or just plain “Wohledelgeborener Herr” (Nobly-Born Sir). Many a gaffe lies in employing the wrong form of address. So luckily for us, this so-called “Kuralienstil” (stylus curiae, i.e. courtly style) has long since gone by the board! In case you’re wondering, the three forms of address mentioned above were for the emperor, a royal prince and a councillor or professor.

of children’s speech, lost archaisms, and german neologisms to drive out loanwords

Children are particularly creative with language. Thomas Böhm, one of the book’s two editors, has kept a running diary of his daughters’ remarkable utterances. Even veteran linguists would be hard put to unravel the logic in one of his daughters’ odd remarks: “English is German in Spanish.” Or this existential query: “Do you wear glasses till you die?”

The history of language is also fraught with loss. Words seldom used tend to go by the board. Not many people nowadays would get all the archaisms in this German sentence: “Während der Funeralien fragt der Eidam den Aldermann, ob der Cicisbeo der Verstorbenen in der Valetrede erwähnt wird oder ob er durchgeixt wurde.” English translation: “During the funeral service, the son-in-law asks the head of the family whether the cicisbeo (i.e. gallant/male lover) of the deceased was mentioned in the valediction or whether he was exed out.”

Xenophobia can target not only foreign people, but even foreign words. Ever since Martin Luther, there have been a number of campaigns to “keep German pure” by eschewing borrowings from other languages. The German poet Philipp von Zesen and some kindred spirits coined plenty of neologisms in the 17th century in order to drive loanwords out of the language. Words like Assekuranz (insurance) and Zirkulation (circulation) were successfully supplanted by Versicherung and Kreislauf. Some of their other clever coinages, however, never caught on: e.g. Entgliederkunst (for Anatomie), Scheidezeichen (for Komma, i.e. comma), Dörrleiche (for Mumie, (i.e. mummy), Lotterbett (for Sofa) and Lustgetöne (for Musik).

a wimmelbook on the HISTORY of german

The book was voted one of this year’s Most Beautiful German Books by the Stiftung Buchkunst. Here’s why, in the jury’s words: If you’re a sedulous bookworm hankering after a break, take a glass of red wine and retire to the Wunderkammer der deutschen Sprache. You can leave it up to the book, which doesn’t need a table of contents, to decide where to dive in: the way this quarto book is designed, it opens as if all by itself. A cornucopia of typographies awaits you. The type sizes and weights patently match the semantic context;  differentiating between the various types of text was clearly a workout for the typographers: essays, lists and enumerations, tables, diagrams, columns – everything had to be set in the right proportions. The single-, mostly double- and, where necessary, even triple-column formatting makes each two-page spread unique. Who could fail to make a rich find in this wimmelbook on the history of the language?

In any case, the book is bound to prove a boon and bonanza to your own linguistic acumen. After leafing through it attentively, you’ll be able to answer many a question that would have stumped you before, such as “Can you kasematuckeln that for me?” Kasematuckeln is, by the way, an archaism contributed by the writer Sibylle Lewitscharoff: it’s one of her favourite words. And the reply to this request is bound to involve some elaborate circumlocutions.