Robert Seethaler empathises with the world-famous, mortally ill composer and conductor Gustav Mahler. Mahler is heading back across the sea to Europe from America. It is his final journey. The exceptional musician would die at the young age of fifty. 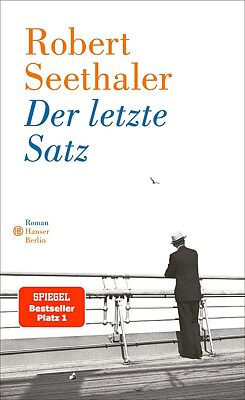 © Hanser Berlin The Austrian author Robert Seethaler’s latest work, Der letzte Satz (The Last Movement), is a slim book of 128 pages about Gustav Mahler’s final journey, his crossing to Europe. The most famous conductor at the transition from late Romanticism to Modernism and great Austrian composer left New York for the second time in 1911. His wife Alma, 19 years his junior, and daughter Anna are also on board. While Mahler sits on the deck of the liner, mortally ill, and his family only exists off-stage – below deck – he wistfully recalls events from his life.

Milestones of a musician’s life

Mahler thinks back to when he first met the most beautiful and sought-after woman in Vienna, to their wedding and their daughters Maria and Anna, the death of their first-born Maria. His thoughts also revolve around his jealousy – his wife had cheated on him with a “master builder” – as well as his resulting encounter with Sigmund Freud, which lasted only one afternoon. The builder was the architect Walter Gropius, but readers are not informed directly of this. Mahler had spent ten years as musical director of the Vienna Court Opera and had engagements as chief conductor at the Metropolitan Opera and with the New York Philharmonic.

Can music be described?

Robert Seethaler writes in his usual laconic manner, though perhaps a little too austerely in this case. The reader doesn’t learn much about Mahler, or rather cannot interpret much about him without background knowledge. But readers will nonetheless get into a pleasant flow as Seethaler’s clear, simple sentences leave a lot of personal room for interpretation. Still, the book doesn’t reveal any insights into Mahler’s creative output. As Mahler says to a cabin boy, “You can’t talk about music, there’s no language for it. If music can be described, it’s bad.” Who knows, maybe Seethaler should have tried to write about Mahler’s music after all? Did the author make it easy on himself or should we interpret it that Mahler just didn’t want to talk to a cabin boy about his music at the time? Anyone who’d like to know more about the kind of music Mahler composed will have to find out for themselves.

And something else is striking: The cabin boy is an appealing character who attentively tends to the ill man, but unfortunately, his portrayal is not consistently credible. His speaking style is more like that of Mahler himself when he explains, “The elders say it’s the souls of the drowned. They cannot come to terms with the darkness and seek the light.” Nicely said, but probably not the words of a boy serving tea whose repertoire otherwise consists more of empty phrases like “Of course, Herr Conductor!”

Statements like those about the indescribable nature of music might make readers curious – especially if they know little or nothing about Gustav Mahler. A simple, quick search gives Seethaler’s work a new meaning. The more you find out about Mahler’s biography, the people in his life and what actually happened, the more priceless and affectionate Seethaler’s sentences about the artist appear. Reading Der letzte Satz a second time is one way, finding out about Mahler’s life and work beforehand is the other.