If you want to bring about change, you need allies. Jana Hensel and Naika Foroutan call on east Germans and migrants to build an alliance. Their aim is to stake out their interests more effectively vis-à-vis non-migrant west German dominant society. 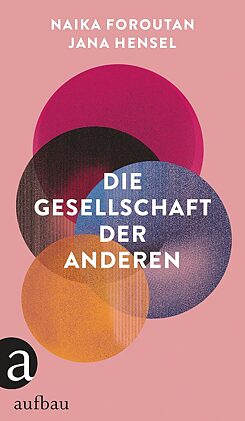 © Aufbau The racist murders in Hanau and the election of the Thuringian premier using votes from the Alternative für Deutschland (AfD) in February 2020 sparked an exchange of views on experiences of east Germans and migrants in Germany between social scientist and migration expert Naika Foroutan and journalist and east Germany expert Jana Hensel. Die Gesellschaft der Anderen (The Society of Others) is the textualisation of their discussion. Since the two writers speak not only as experts, but also as people themselves affected, their dialogue includes both analytical observations and accounts of their personal experience.

Even 30 years after reunification, the non-migrant west German part of the population in Germany still hold the key social positions, thereby defining discourse and the yardstick by which everyone else is to be measured. In their discussion, the authors recognise the many experiences migrants and east Germans have in common: learning new structures, downgrading in the educational system, lack of recognition of vocational experience, a sense of insecurity. Members of both groups know what it means to be found collectively guilty of offences committed by other members of their group and to be pressed to give an explanation - an experience spared members of the dominant society.

While it is taken for granted that west German knowledge has to be acquired, members of the dominant society can act with impunity when they display ignorance and disinterest towards marginalised groups. In some areas, the experiences of the two groups differ, however: east Germans have no experience of racism, for example, and migrants living in west Germany are not affected by the same demographic imbalances and regional structural weakness as some parts of the population in east Germany.

Identity politics as a strategy

Both writers see themselves as speakers for their communities, whereby they understand the term “community” as a construct. The fact that Naika Foroutan not only has a migration biography but also grew up in west Germany, while Jana Hensel is east German but does not have a migration biography shows how fluid the boundaries of these constructs are. More than once, Jana Hensel accuses her conversation partner of talking about east Germans like a representative of the dominant society. Yet both agree that for strategic reasons, identity politics in the sense of the term used by Gayatri Spivak, one of the founders of post-colonial theory, is necessary for a functioning democracy in order to reveal mechanisms of suppression and exert political influence. In a second step, according to the theories of sociologist Stuart Hall, power relations should be corrected before identities can be deconstructed once again.

Since attempts at dialogue with the dominant society never take place on equal terms and its representatives usually turn out to be “permanent misunderstanders”, Jana Hensel favours empowering discourses within the communities, enabling them to form alliances and formulate joint demands to the outside world.

Specifically, and this is directed at policymakers, the authors advocate quotas for filling decision-making positions. They would like to see greater diversity within the parties and the introduction of voting rights for foreigners. For the next legislative period, they recommend the establishment of a Mission Statement Committee for the Development of Participation and Equal Opportunities in a pluralist democracy.
Some of the discussion topics would have benefited from more controversial, more profound debate. Nevertheless, the authors have succeeded in creating a narrative of German plurality, which they use to underline their plea for alliance-building. By making maximum demands, the two writers aim to change the discourse and call on the dominant society to engage in self-reflection. They make an important contribution to achieving that objective in this book.