Goethe-Institut | created with Canva | CC BY 4.0

How can a regular library achieve success online? Very little is said about what to do if there are no resources or audience on social networks. I offer three simple strategies for working with libraries online and a small bonus about charisma.

This fall, I was lucky enough to participate in the international seminar EMERGING INTERNATIONAL VOICES organised by the Goethe-Institut and IFLA. The discussions focused on what libraries should do during the lockdown period, when they really need to go online. There were no ready-made recipes for success at the seminar itself, but it is still possible to draw interesting conclusions.

I work in a regular public library. There are hundreds of libraries like mine in the capitals, dozens in the cities, and only a few in the villages. They have little in common with national libraries or library system administrations – their situation is much simpler. There is a library, there are readers who usually live within walking distance, and the interaction between these two entities. Often a small library has a following of around 100-200 people on social networks. It counts as a great success if the post gets 10-20 likes. This is usually the limit. It is important for me personally to talk about these libraries. They are in the majority, and they are the least prepared for change.

Online, the library can act as a space for the import of culture from other parts of the country and beyond; distance is no longer important.

So, if you are an ordinary library and you need to find an audience online somehow, what should you do? Here are three strategies that may work in different cases.

Posters of online streams from Vologda: culture from all over Russia.

1. Import the culture that is missing.

The city of Vologda in Russia is a nine-hour train journey away from Moscow. It is a small, traditional place with a population of three-hundred thousand people. Library No. 21 is also very ordinary. Colleagues from this library realised that since everything is now online, it would be possible to invite interesting people from all over Russia for a zoom call. And they started calling. Before the quarantine, they had often invited musicians and writers to Vologda, but now they do it online. For Vologda residents, the possibility of communication with cultural figures from other cities is very interesting, because there are not enough cultural figures of their own. And the content that appears in this way is valuable not only to Vologda residents, but also in demand throughout Russia. 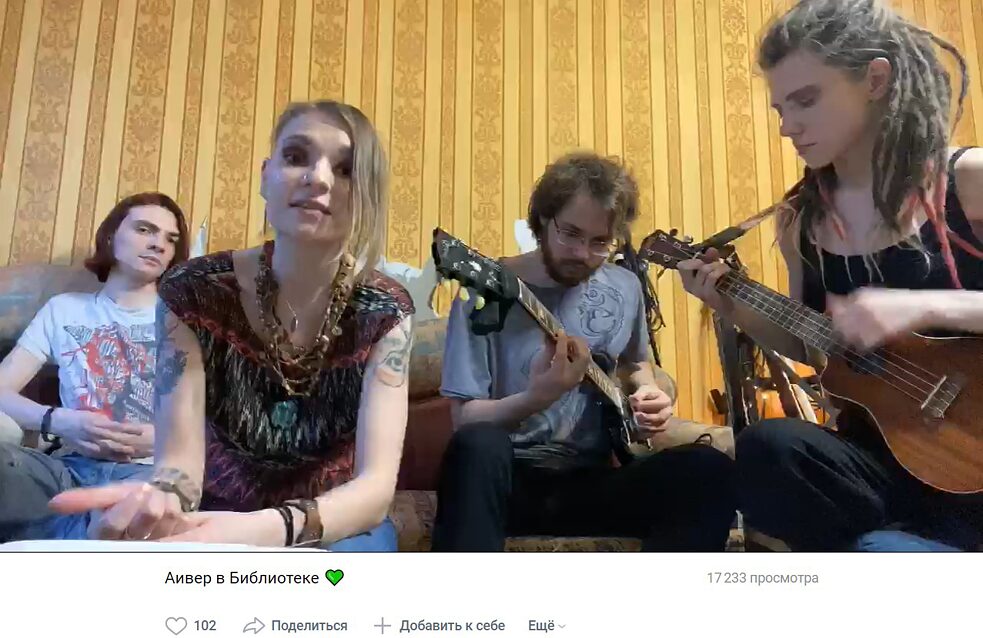 Moscow band on a Vologda stream: 102 likes, 17,000 views! In this respect, the library can act as a space for the import of culture from other parts of the country and beyond; distance in this sense is no longer important. You don't have to invite people only to public meetings, you can organise creative workshops, hold design concept sessions, hold festivals with non-resident participation, and so on. 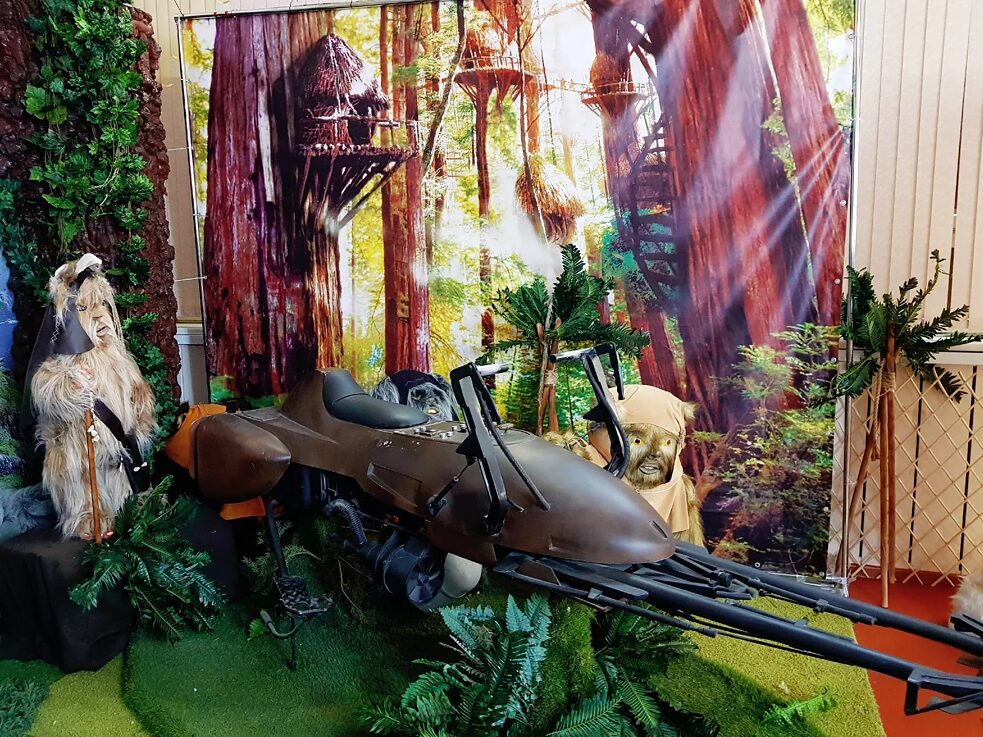 Museum of a Far Galaxy in a public library in Moscow

Library No. 161 in Moscow began to communicate with ‘Star Wars’ fans, resulting in the organisation of a Museum of a Distant Galaxy and occasional joint events.

It is very difficult to work with an audience when it includes all potential readers of the library, including teenagers, adults, and children with parents. It can be difficult to find common ground between such disparate library users. To expand your audience, you can identify a specific group of people interested in a specific topic and offer them co-operation. For example, Library No. 161 in Moscow began to communicate with ‘Star Wars’ fans, resulting in the organisation of a Museum of a Distant Galaxy and occasional joint events. Star Wars fans started coming to the library from all over the city. When the lockdown was announced, the library did not lose contact with the fan community, but continued to hold events for them online. 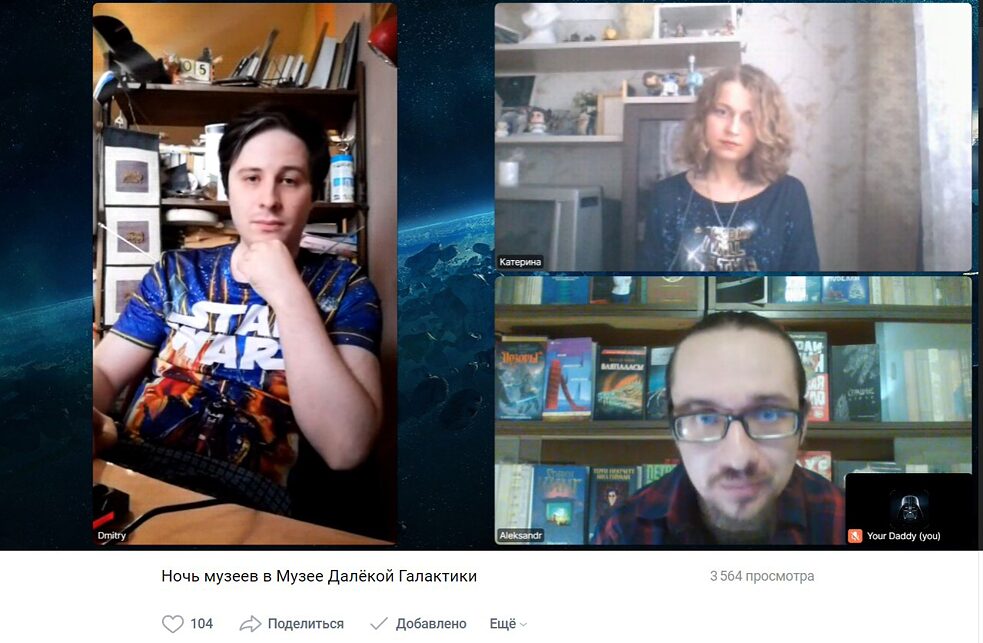 Star Wars stream with a publisher and cosplayer. 104 likes and 3.5K views! Possible online communities include fans of literary universes (Lord of the Rings, Harry Potter, The Witcher, and others) or people interested in particular hobbies (board games and role-playing games, historical and reconstructing societies, music lovers etc.). Groups of people with shared interests generally need a platform for meetings and exchanging information.

If you don't have such a thematic platform and there is already a lockdown then you can use the interests and hobbies of employees and try to create content and online events based on these: read and discuss comics, comment on TV series etc. This can be a successful way of appealing to library users. 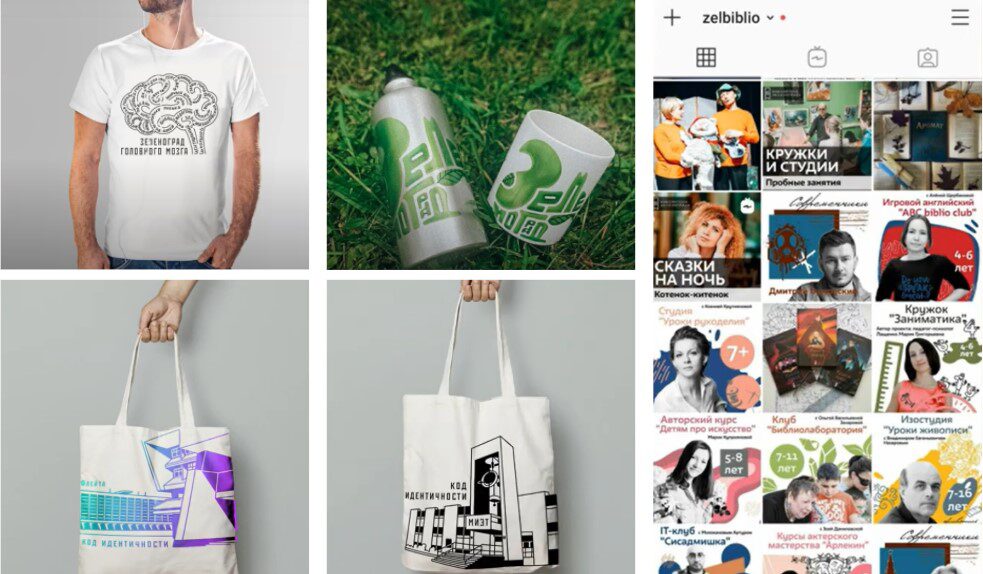 Brand design based on local knowledge

The last method focuses on local identity. Libraries are usually expected to promote local knowledge, but libraries don't always exploit the potential of this area of their work. The district or city where the library is located already represents a specific audience that identifies itself according to its geographic location. The easiest way to get to this audience is to create a brand based on local identity and promote it on behalf of the library. This year, the Zelenograd library system won the prestigious library competition in the category ‘Brand’. What did they do to win? They developed the brand of Zelenograd, emphasising the history of the city, its features and attractions. They made beautiful souvenirs and began to distribute them. And online they managed to attract residents to their side, creating a loyal audience. 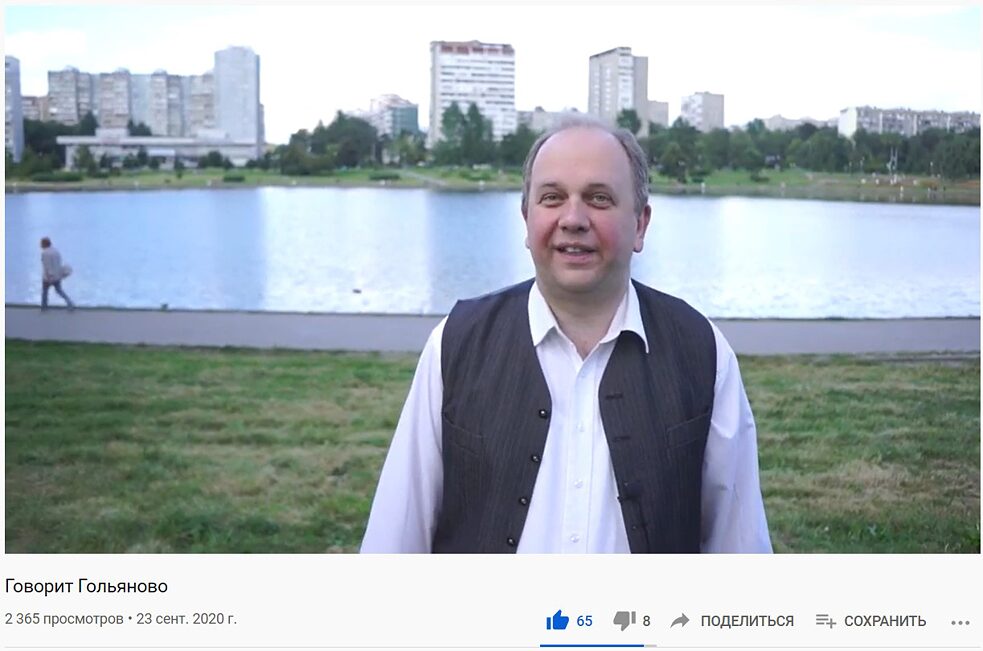 Documentary film made by librarians And I understand how it works. Recently my colleagues released a video about a small area in the East of the city. In the video, local residents talk a little about the history of the place and about themselves: it comes across as very sincere and friendly. Residents of the area were delighted, and watched with great pleasure. We received a lot of rave reviews, and more than 50,000 views across various social networks (including more than 2,000 on YouTube). People really like the place where they live and are drawn to those who share their enthusiasm. 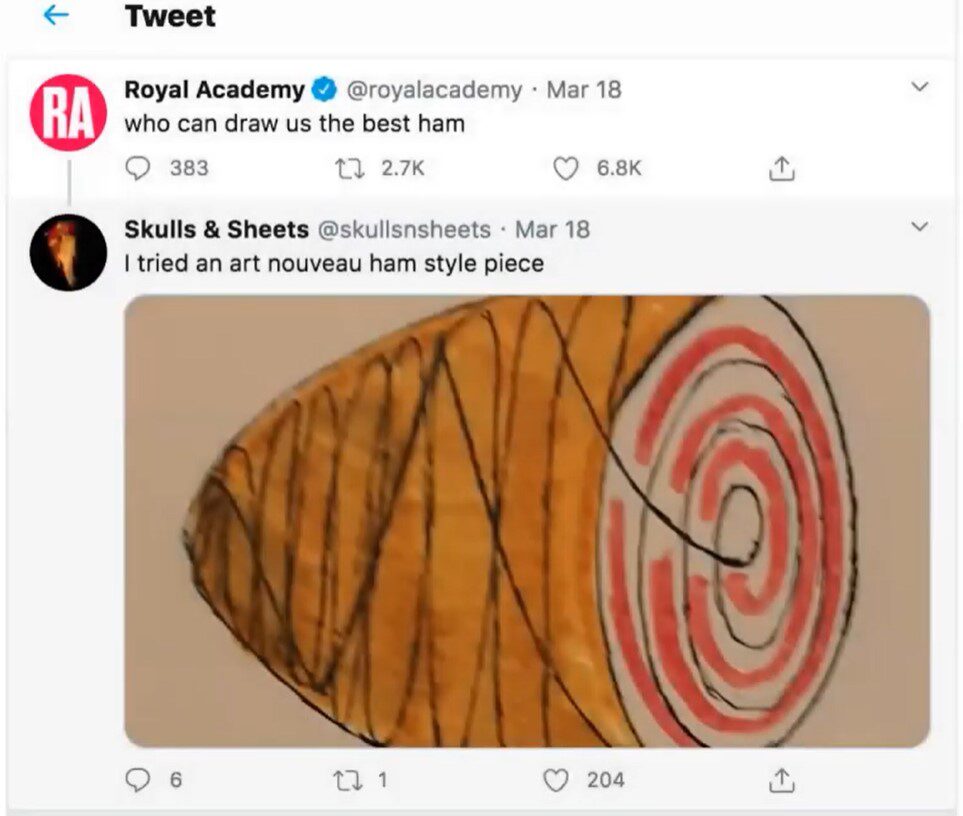 All three of these strategies can be used simultaneously in one library or separately, but there is a further important point to note. Harry Verwayen, one of the EIV speakers, spoke about the Royal Academy case. They tweeted a very simple message – ‘who can draw us the best ham’. And they got crazy subscriber activity.

Come up with an idea that is unexpected enough to surprise your colleagues and make them smile, and you will achieve your goal.

It is clear that social media is always a story about provocative content, and here it is important to find a distinctive voice that can attract a new audience without losing the old one. The Royal Academy speak to their followers in the manner of a very enthusiastic and sometimes eccentric intellectual. Who may sometimes ask you to draw a ham. 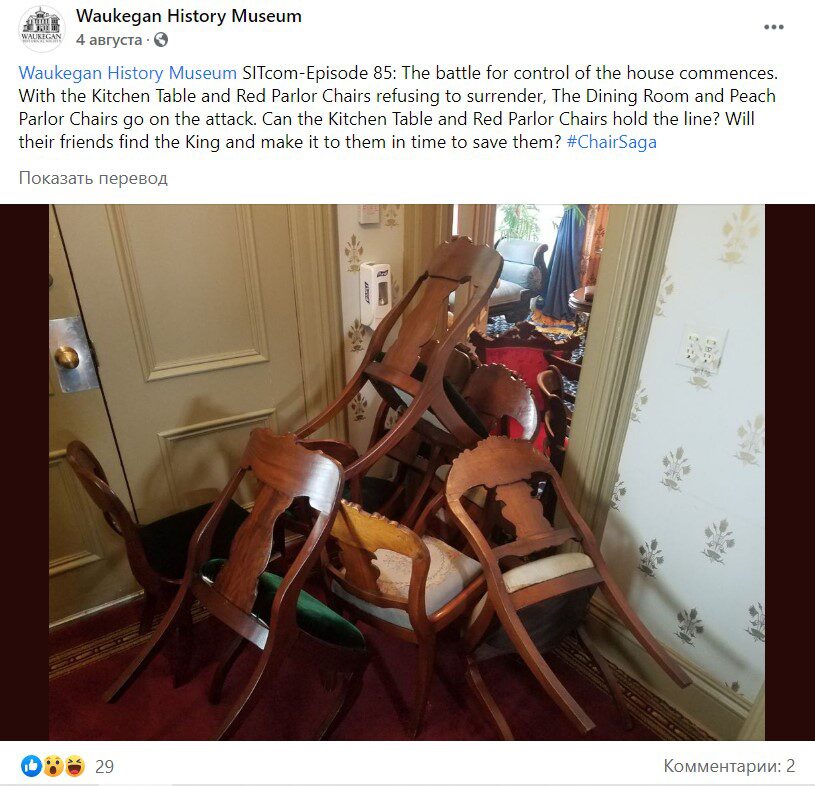 Best SITcom, I’ve ever watched It is important to find your voice and make it different and special. How can I do this for an ordinary library that doesn't have a Royal Academy audience? It's very simple: have fun. Come up with an idea that is unexpected enough to surprise your colleagues and make them smile, and you will achieve your goal. Here's a wonderful case to illustrate my idea. The Waukegan History Museum is an ordinary, small provincial museum. Only two thousand people subscribe to it, but what they came up with is incredible. They announced that they were launching their own SITcom, in which all the roles would go to their chairs: ordinary, historical, miniature. Different. And they began to publish episodes (already over a hundred) about how chairs fight for power, love and betray, live and die. Very dramatic and very funny. And most importantly, very bold. They decided to film a sitcom about chairs, and they did. I am sure this kind of intellectual, mad humour is perfect for librarians.

PS> Many thanks to Emerging International Voices for the opportunity to observe various voices from all over the world. It’s really inspiring.

“Emerging international voices“ is a joint project of the Goethe-Institute and IFLA. Its long-term purpose is to establish an international network of young individuals engaged in library advocacy in their countries.