For more than 20 years now a group of artists in Berlin known as “inges idee” have been working on projects in public space. In a playfully charming way they design sculptures that everybody can understand. 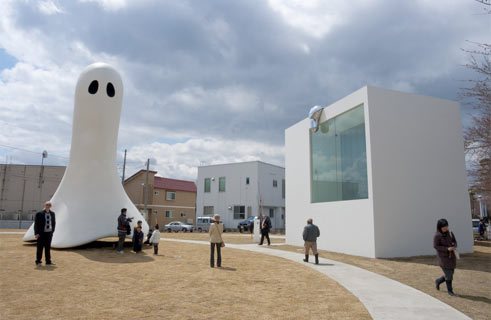 Ghost / Unknown Mass, Towada Art Center, 2011, Towada, Japan; | © inges idee Their logo is absolutely perfect - a small letter “i” topped with a dieresis, those two horizontal dots. “ï” is in fact a letter that does not even exist in the German language - only in the case of inges idee. The logo was designed by graphic designer, Knut Bayer, and the reason it is absolutely perfect is the fact that it incorporates the wit and spirit of these four artists from Berlin into an almost human-like figure - in such a way that the idea might have stemmed from the four “inges” themselves. 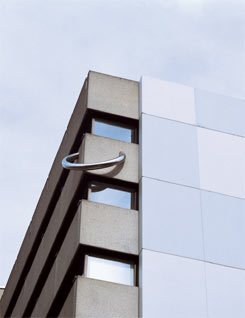 Piercing, 2001, Heidenheim; | © inges idee Since 1992 Hans Hemmert, Axel Lieber, Thomas A. Schmidt and Georg Zey have been working together on projects that can be located somewhere between “architectural art” and “public space art”. At first their focus was on Berlin, but later shifted to the whole of Germany. For quite a few years now however inges idee has been creating mostly sculptural works for both public and private clients.

This is how the artists came to produce such works as a street lamp that revolves every minute in a clockwise direction, placed in the square in front of the central station in the Swedish town of Linkøping; a football pitch that is divided into two halves by a river in the Westphalian town of Emsdetten in Germany; or recently as part of the Emscherkunst 2013 in Oberhausen, a curved, freestanding pylon of 35 meters (Zauberlehrling i.e., “Sorcerer’s Apprentice”).

“Our works are not abstract sculptures, and if they were, then the abstraction would take the form of a narrative element,” says Axel Lieber. 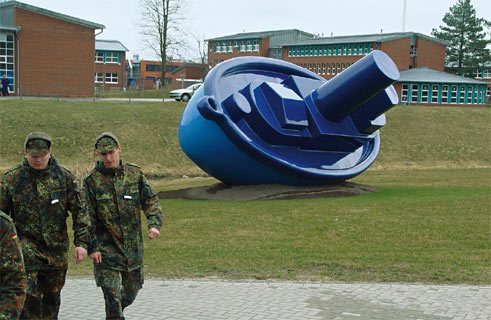 Between courtesy and subversion

It is the dichotomy of order and disorder that embraces the world of inges idee. Their work is also pervaded by a seemingly childish, boyish interest in finding improbable answers to the question of what things would look like if they were made bigger or smaller, if they were stretched, compressed, exaggerated, and then returned to their normal size - a question that requires a new answer for every situation. 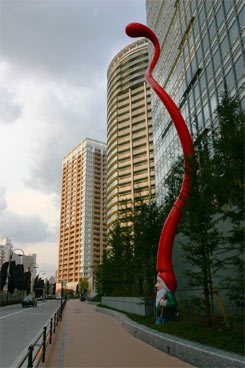 Growing Gardener, Art Village Osaki Art Project, 2006, Tokio, Japan; | © inges idee For the group’s 20th anniversary in 2012 they published a catalogue entitled Projekte 2006–2011 that once again showed just how special and exuberant the humour is that goes into their works. The secret of the their success is based on the fact that the art of inges idee is based on everyday experiences and situations. “We work with things that everybody is familiar with and we then turn them upside down. Our works function on a purely visual level, they are accessible to everybody, even if they have no previous knowledge of the subject,” explains Hans Hemmert - and he tells of the “layman’s vision” being the starting point for every piece produced by inges idee – the artists themselves are the ones who make use of this “layman’s vision”.

Their brainstorming sessions take place in some old studio rooms full of nooks and crannies in the Berlin district of Wedding and it is there where their projects come to life. On the surface they first seem to be childishly simple, but when you delve into them you notice an anarchic attitude. They can be appreciated immediately by both children and adults alike, the latter however more for their cryptic subtleness. The artists however have to perform a balancing act between courtesy and subversion over and over again when it comes to the demands placed on them by the location, the client and the idea itself. 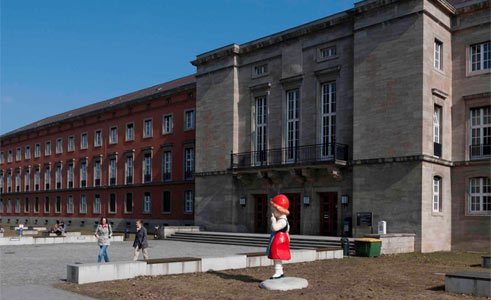 “inges idee“ adheres to the principle of allowing their works to penetrate the context of the public sphere and, when they are in there, to spread like “parasites”. For example, in 1999 the artists placed 17 oversized sculptures of magpies in front of the Landeszentralbank (Regional Central Bank) in Potsdam - magpies, as is commonly known, are famous for being thieving. In 2002 they designed a sculpture of a blue, toy ship that had taken on the size of a real ship and placed it on the field in front of the Marine Technical School in the West Pomeranian town of Parow - at the same time they called it “Trojan Horse”. In 2009 the artists placed an 18-metre-high drop of water in solid form on the seaside terrace of the convention centre in Vancouver, Canada. 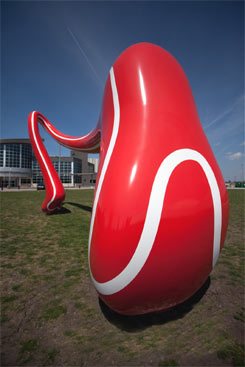 Drop, Vancouver Convention Center, 2009,Vancouver, Canada; | © inges idee Works like these are reminiscent of those by Claes Oldenburg and the Pop Art movement. When asked the question, what cultural trends influenced inges idee the most, Axel Lieber refers to “Punk”.

The physicality and the directness that affected art (in West Berlin) in the 1980s had a decisive impact on the artistic understanding of the four artists, who got to know each other back then at the Hochschule der Künste (University of the Arts) and at the Vincenz Sala Gallery that has reopened in the meantime.

One of the reasons why inges idee has remained productive without any serious differences of opinion over the last more than 20 years is, according to Axel Lieber, the fact that all four members of the group have remained professionally active in their own right as individual artists. The economic situation obviously has played a part - the group, which had to really work hard to get jobs in the first few years, now realises 95 per cent of their work on a request basis.

The fact that inges idee has over the years used a lot of recurring motives for their work such as drops of liquid, snowmen, hilly sport fields, animals and human figures that stretch up to the heavens has made the group globalisation winners. These stretched figures, by the way, are to be seen in all kinds of variations: in Berlin, Luxemburg, Singapore, Bremerhaven and Tokyo. Being a globalisation winner, however, is only to be welcomed, if the works placed in public space by inges idee generate a game that, if played convincingly, can be declared to be a basic principle for interpreting the world we live in.

Martin Conrads lives as free-lance author in Berlin and lectures there in visual communication at the Universität der Künste.