Stammheim prison acquired a depressing notoriety in the nineteen seventies as the place where leaders of the terrorist group Red Army Faction (RAF) were imprisoned. During the course of a two-year project, photographer Andreas Magdanz has addressed this sensitive subject and recorded Stammheim, whose maximum-security wing is to be replaced by a new building in 2015, for posterity. 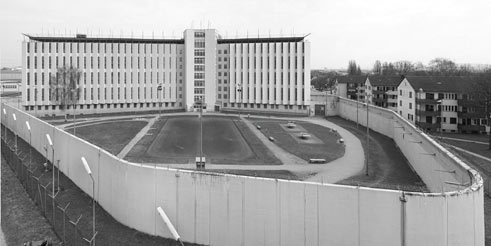 Andreas Magdanz, Building I, 2010/2011; | © Andreas Magdanz Apart from the prisoners themselves and the prison staff, it is unlikely that anyone has ever got quite as close to Stammheim in the north of Stuttgart as Aachen photographic artist Andreas Magdanz.

A specialist in documenting important German post-war sites, Magdanz spent five months living in one of the neighbouring apartments provided for prison staff, which allowed him to photograph every facet of the legendary prison each day after 6 pm.

It was only after the 600 murderers, thieves and other criminals currently in custody at the prison were securely locked away in their cells that Magdanz could be given access to the prison – and thereby granted a unique insight into life inside this once so notorious jail. A small selection of his large-format digital photographs is now on display at Stuttgart’s art museum. These are the oppressive images of a place where the terror wreaked by the RAF – known as the “German Autumn” – came to an end.


Cells with a view?

According to an article in the Stuttgarter Zeitung, Karl Schwaderer, who was the director of construction at the time, is supposed to have made the following sarcastic remark when the new ten-storey prison building was opened in 1963: “It is unique for prisoners to be offered such a wonderful view of freedom”.

Twelve years later, the prison was upgraded again – no more storeys were added, but security was tightened: for 16 million deutschmarks, the prison was equipped with a multi-purpose building that went down in history as the place where the leading RAF terrorists went on trial. 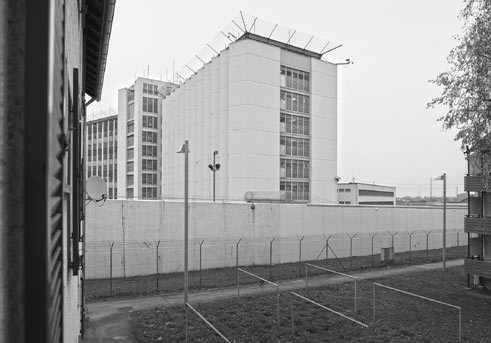 Andreas Magdanz, View on building I, 2010/2011; | © Andreas Magdanz Fearing airborne attempts to free the prisoners, the multi-purpose building – and indeed the courtyard walkway – were covered with steel mesh in the run-up to the trial. The courtroom itself had eight-metre-high concrete walls, and featured only small skylights. It came to symbolize functional and deterrent West German post-war architecture.

Andreas Magdanz’s images paint a sobering picture of just how bleak this period in the nineteen seventies really was. Because no people are depicted and the black-and-white motifs often blur into a dirty grey, the impression given by the cold, sterile environment is all the more threatening. Magdanz’s photographs portray long, neon-lit corridors and empty cells with bullet-proof windows. In his photographs, Magdanz records the drab misery of this place right down to the tiniest detail.

Andreas Magdanz, View on the atrium, 2010/2011; | © Andreas Magdanz Methodically, Magdanz worked his way up from the bottom of two buildings, from the basement, kitchen, laundry, administration offices, visitor rooms and sick bay right up to the seventh floor, home to the leaders of the RAF – Andreas Baader, Gudrun Ensslin, Ulrike Meinhof and Jan Carl Rapse – who enjoyed many privileges such as record players, televisions and even specialist literature about guerrilla warfare and modern explosives.


The “Stammheim night of death”

Cell 719 in particular is regarded by Magdanz as an “historically-charged, soulful place”. This is where Ulrike Meinhoff hanged herself on the window crossbar in 1976, two years after she was sentenced to life in 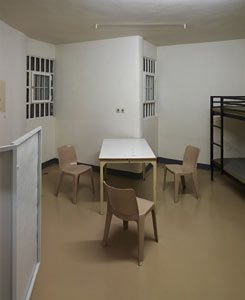 Andreas Magdanz, View on cell 719, 2010/2011; | © Andreas Magdanz prison. It is also where Andreas Baader shot himself on 18 October 1977 in what has come to be known as the “Stammheim night of death”, at the same time as – according to the general consensus today – Jan-Carl Raspe and Gudrun Ensslin took their own lives in the cells next door and opposite.

At the same time, Hanns Martin Schleyer, the president of the German Employers‘ Association who had been kidnapped by the RAF, was murdered; his body was found the following day in the boot of a car in France’s Alsace region.

Stammheim is not Andreas Magdanz’s first work that addresses contemporary history. He has previously documented mining in Garzweiler (1995-1997), the former emergency government bunker known as the Marienthal Office (1998-2000), Auschwitz-Birkenau concentration camp (2002/2003), the former NSDAP cadre training facility at the former military training ground “Camp Vogelsang” (2004) and, last but not least, the headquarters of the German intelligence service, the Bundesnachrichtendienst (BND) in Pullach (2005/2006).

The current series now joins the multitude of theatre plays, books and films by well-known directors such as Margarethe von Trotta, Reinhard Hauff and Heinrich Breloer that show how the dark Stammheim chapter in German post-war history, with all its inconsistencies and puzzles, has still to be fully illuminated even after years of critical examination and analysis. 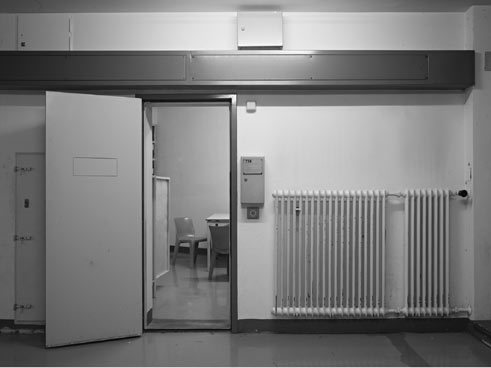 Andreas Magdanz, Floor with view on cell 719, 2010/2011; | © Andreas Magdanz At the same time, Magdanz attempts with photographic means to make the subject vivid and comprehensible. Part of his idea was to tell the Stammheim story as completely as possible in pictures, thus providing a psychological profile of German sensitivities in the nineteen seventies. “Ultimately, I not only photographed or scanned Stammheim, I dissected it”, explains the 49-year-old photographer in the book accompanying the exhibition. More Stammheim is impossible.

The RAF myth has now even been visually documented for posterity with images from the cherry-picker and helicopter perspective. This achieves Magdanz’s goal of once again provoking a discussion of this important chapter in West German history and of opening the eyes of future generations to what happened. For him, this is the level on which Germany’s story gets told right to the end.

As Ulrich Schneider points out in the book accompanying the exhibition, Magdanz did what he had to do. Gerhard Richter, he explains, attempted something similar, the only difference being that his cycle of paintings entitled 18 October, featuring portraits of Meinhof, Ensslin and other RAF prisoners, is virtually inaccessible to the German public because it has been on display since 1995 at the Museum of Modern Art in New York, the artist having met with little approval in his home country on account of his alleged glorification of terror.

“We can only hope”, Schneider concludes, “that Magdanz’s images, bereft of people as they are, preserve memories of a part of Germany from a distance”.

Cornelia Ganitta is a cultural studies expert and journalist. Since 1996 she has reported for various print and online media, primarily on art and culture.