In the 1950s the German artist group ZERO wanted to establish a new concept of art. They proclaimed the zero hour for German post-war art and became, in barely a decade, one of the most important avant-garde movements of the twentieth century. 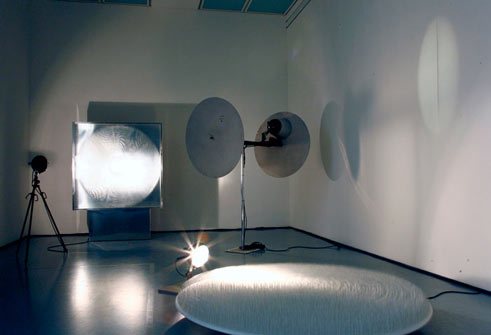 Exhibition view, ZERO “Lichtraum (Hommage à Fontana)”, museum kunst palast, Düsseldorf, 2009 (detail) Heinz Mack, “Silber-Rotor”, 1960; Otto Piene, “Doppelscheibenprojektor”, 1963; Günther Uecker, “Lichtscheibe”, 1964/65; on the wall: projection of a “Fontana-Schlitzes”; | © Photo: Horst Kolberg, ZERO foundation/ Museum Kunstpalast, Düsseldorf In retrospect, we must call epochal that 11 April 1957 when two young Düsseldorf artists invited the public into their studio and there proclaimed the zero hour of post-war art. It was birth of ZERO. A series of evening exhibitions, at the “Ruins Studio” in the Gladbacher Straße 69, Düsseldorf, by Otto Piene, Heinz Mack and a little later Günther Uecker marked the beginning of a new avant-garde. In this time of upheaval the name ZERO designated both a new artistic and historical beginning, an emancipation from traditional genres and traditional principles of art. 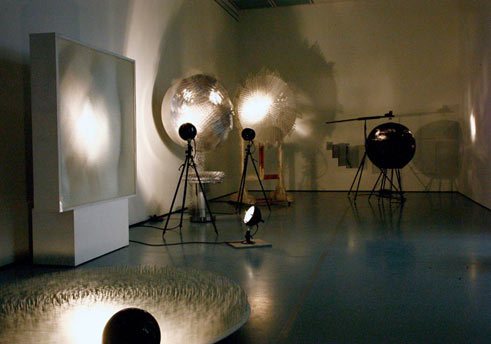 Exhibition view, ZERO “Lichtraum (Hommage à Fontana)”, museum kunst palast, Düsseldorf, 2009 (detail) Günther Uecker, “Lichtscheibe”, 1964/65; Heinz Mack, “Weißer Dynamo”, 1964/89; communal works “Silbermühle” and “Weiße Lichtmühle”, 1964; Otto Piene, “Lichtkugel”, 1960; | © Photo: Horst Kolberg, ZERO foundation/Museum Kunstpalast, Düsseldorf The new beginning announced by the group rested on the ideal of “pure light”. Heinz Mack and Otto Piene saw themselves as an artistic movement inspired by the spirit of change and representing as a new foundation “that should serve as ground zero and starting-point for a fresh awareness of our surroundings”. They developed a new visual and formal language: light and movement moved to the centre of their artistic work, they reduced everything figurative. Their quest has been directed ever since to a purist concentration on the clarity of pure colour and the dynamic vibration of light in space. “Kinetic light art” is the magic word that materialises in the form of discs of light, spheres of light, whole rooms of light. Otto Piene’s Lichtballett (Light Ballet) is one of the major works of the movement. Using the parameters of light, structure, vibration and monochromy, ZERO ventured from the start daring, creative experiments, accompanied by spectacular and now legendary actions and environments.

A celebration of silence, light and emptiness 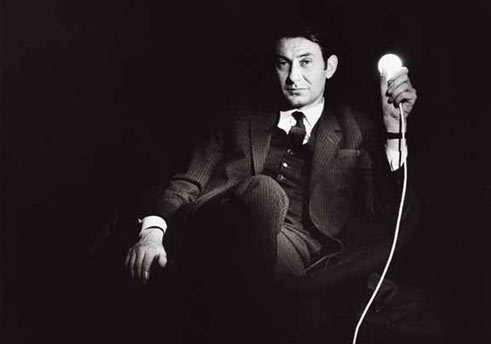 The artist Otto Piene in the late 1960s; | © Photo: Lothar Wolleh The exhibitions could initially be seen for only one evening. Otto Piene has described them as “Evening openings without a subsequent ongoing exhibition”. This practice was born of necessity. In Düsseldorf in the 1950s there were only a few art galleries that were committed to this new movement and only a few collectors interested in acquiring its works. One pioneering gallerist was Alfred Schmela. On 5 July 1961 he opened the exhibition ZERO. Edition, Exposition, Demonstration, combined with a ZERO party in the old quarter of the city. It demonstrated ZERO’s aesthetics of light with aluminium banners, metal foils, light reliefs and the last of three issues of the magazine ZERO.

The publication was dedicated to like-minded artists in Europe, including Yves Klein as representative of the Nouveau Réalisme group in Paris, Lucio Fontana in Milan and the NUL group in the Netherlands. Over 40 artists took part in the exhibition, ranging from the painters Rupprecht Geiger and Bernard Schultze to Günther Uecker, who through this exhibition made contact with and joined the ZERO group. All the participating artists celebrated calm, silence, light and emptiness. In 1963 the group issued a proclamation reminiscent of Futurism: the manifesto ZERO, The New Idealism.

Light magic in the attic 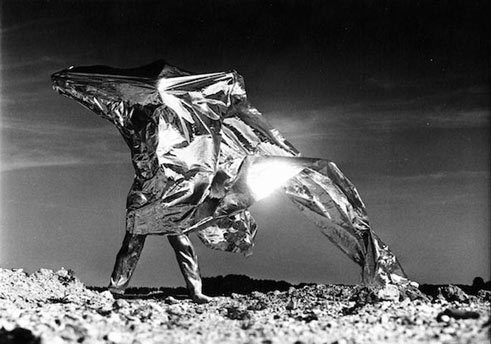 Heinz Mack in “Sahara-Projekt“ (i.e., Sahara Project), 1968; | © Photo: Lothar Wolleh The ZERO group was able to ignite a “utopian spark” at the documenta III in Kassel in 1964. There the artists confronted the staticness of visual art with mechanical movement, light spectacles and a kinetic work that was dedicated to Lucio Fontana, who had not been invited to the documenta. In Lichtraum (Hommage à Fontana) (i.e., Light Space [Homage to Fontana]), ZERO conjured up a last-moment of light magic in the then still unused attic of the Fridericianum, the main exhibition building. The light space consisted of seven rotating objects, to which each of the three group members contributed his own work: Mack, the lamella fields of aluminium; Piene, the grid motif with perforated discs and spheres; and Uecker, the field of nails as a light-structure element. In honour of Fontana, on the wall of the room was projected one of his concetti speziali, a monochromatic picture slashed open with a knife. 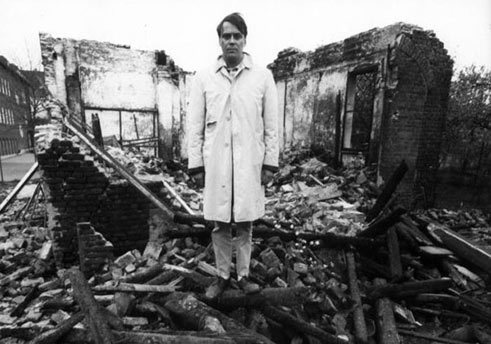 Günther Uecker at the ruins of his studio in Düsseldorf, 1965; | © Photo: Lothar Wolleh The avant-garde group dissolved itself as spectacularly as it had kindled its ideas: with a party, where they set rolling a flaming wagon in the direction of the Rhine and let it sink hissing beneath the waves. Of the party, Mack wrote: "In 1966 ZERO found a positive end. Over a thousand people celebrated it one night. I had myself desired this end: an end that I found quite as liberating as had been the beginning of ZERO".

But ZERO’s message and the seeds of its ideas had been disseminated throughout the world and found realisation in countless kinetic phenomena. About 55 ZERO exhibitions in Europe and the United States had taken place by the time of the disbanding of the group. Afterwards Otto Piene was active at the Massachusetts Institute of Technology (MIT). In 2013 the city of Frankfurt awarded him the prestigious Max Beckmann Prize. Günther Uecker gained fame with his nail pictures; Heinz Mack with his light-picture objects. In December 2008 the ZERO Foundation was established in Düsseldorf. For the Foundation, it is a stroke of luck that the artists are still among its active contributors.