Thomas Scheibitz
Painting as a Paradox

“One-Time Pad” – the title of Thomas Scheibitz’s exhibition at Frankfurt’s Museum für Moderne Kunst does not just sound cryptic – it is cryptic. The name derives from a type of encryption used for secret messages which is considered to be impossible to crack. 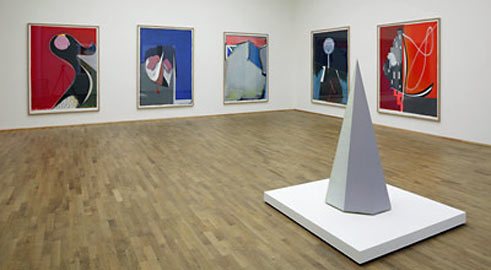 Thomas Scheibitz, exhibition view, “One-Time Pad”, 2012; | © Photo: Axel Schneider, VG Bild-Kunst 2012 “I am convinced that an image is lost as soon as it can be described or explained. It has to have a certain quality that simply cannot be put into words,” explains Thomas Scheibitz in an interview with art critic, Isabelle Graw, on the occasion of his exhibition at the Museum für Moderne Kunst in Frankfurt am Main.

Over and over again the artist has had to defend the fact that he paints. Over the last 50 years painting has been dismissed many times as an artistic medium that is outdated. Despite this - or maybe precisely because of this - Thomas Scheibitz has managed to create a real international sensation in an amazingly short time. Thomas Scheibitz: One-Time Pad

The vocabulary of shape baffles

Back in 2005 Thomas Scheibitz, who was 37 at the time, was selected to appear in the German pavilion at the Biennale in Venice, along with the performer, Tino Sehgal. 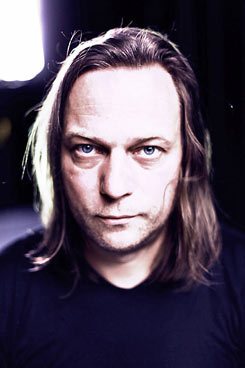 Thomas Scheibitz; | © Photo: Martin Eder Although the event turned out to be somewhat controversial - his works had impact. This was above all due to the paradoxes inherent in his work. On the one hand, the artist insists on the traditional format of “oil on canvas”, even if at times he does use vinyl or adds paint spray and pigment marker. On the other hand, he allows his paintings to take over the room - in the form of sculptures that are in fact composed of the most varied materials.

Although Thomas Scheibitz is neither the first nor the only artist to feel hampered by the limits set by the picture frame - his hitherto unseen, unconventional vocabulary of shape never fails to baffle. The viewer marvels at the way the artist unites the geometrically angular form with anthropomorphic or vegetative elements so that the paintings, which now appear to be reduced in form, schematised and more or less abstracted, also conjure up images of figures, heads, architecture, sky and earth for the viewer. The illusion of spatial depth and three-dimensionally depicted details, placed alongside flat, two-dimensional elements, border on the absurd.

And yet the whole thing still seems so logical that even the sudden appearance of letters, numbers and signs does not automatically prompt the viewer to ask the question - “why”.

One reason for this is the painterly quality of his images. Intense, suggestive or dissonant colours - like yellow, orange, blue and neon-green - are masterly contained by tones of grey.

There are areas that are in perfect monochrome and others with seemingly arbitrary brushstrokes and random splashes of colour. Contours, in black or colour, with frayed or clear edges, have a balancing effect on his well thought-out image structure. The abstract and the figural do not necessarily cancel each other out in his work. Before the fall of the Berlin Wall politico-cultural verdicts declared the realism of Eastern Europe and the abstract art of the West to be opposing programs. Imprudent categorisations like this, however, have always been around.

In his biography the artist, who was born in Radeberg in 1968 and now lives in Berlin, makes no mention of his art studies at the Dresden Academy of Fine Arts in the early 1990s - and with good reason.

A hovering sphere as a self-portrait

The overall impression one gets at the exhibition in Frankfurt is that it is also very well crafted. It kicks off with seven large-scale paintings at the entrance which have been placed in special positions in the middle of the room.

Whereas in the other rooms large and small formats remain on the walls, accompanied by just a few sculptures, there is in fact a large room that has been reserved exclusively for sculptures. The constructs to be found there are really quite curious - put together from trivial materials such as MDF (medium-density fibreboard) and cardboard, or even wood, granite, metal and fabric. 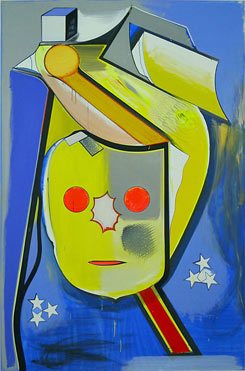 Thomas Scheibitz, “Henry Stand”, 2012; | © VG Bild-Kunst 2012 The artist makes some of the sculptures look as if they have simply been cobbled together; in most cases however he has resolutely defined the interaction between colour, shape, light, material character and space.

Thomas Scheibitz makes use, for example, of neon lighting from behind for his wall-mounted object called “If Seven Was Nine”. He uses his titles of course to spark the observers’ imagination and at the same time also to provoke their need to interpret. For example, is he alluding to a famous horror film in his piece “La Horde”? Who is Henry Stand and is the portrait of “Tracy Berglund” really supposed to depict a person?

You can search the internet for these names all you want, but it won’t help you very much in trying to understand Thomas Scheibitz’s work. Even his self-portrait does not help - it is an eyecatching, steel sphere painted in constructivist style hovering in the room.

A code that cannot be cracked 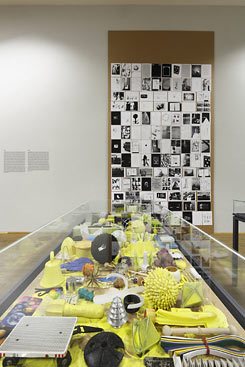 Archive room; | © VG Bild-Kunst 2012 Thomas Scheibitz has adopted a very special approach towards his work. He develops his shaping techniques in a process of transformation and translation, so to speak. His point of departure includes not only his own way of seeing things and his own experience, but also images and objects both from history and the present day.

This is why in the end it is neither possible nor necessary to decipher anything at all. This is also signalised by the name of the largest image on display that has been selected as the title of the exhibition: “One-Time Pad” – the name given to a process for the encrypting of secret messages.

The exhibition might well give some insight into Thomas Scheibitz’s oeuvre - an opulent collection of the most varied objects, materials, photos and sketches, as well as designs, drawings and a few of his earlier works. On the other hand, however, it might not only be viewed as an attempt at enlightenment, but also as a red herring.